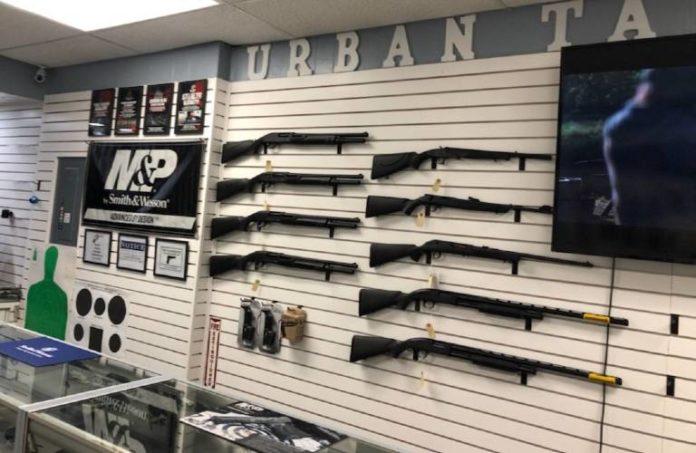 Fernando Colon has had only one issue since he opened his gun store, Urban Tactical Firearms, in Jersey City at the start of the new year: He can’t keep enough guns in stock.

“Sales have been through the roof,” he said. “I can’t keep them on my shelves.”

Colon said he sells an average of 60 firearms a week — with a Glock model 19 the most popular purchase, followed by shotguns.

He said he’s not sure of the reason for the surge in sales. He credits the fact that his store is just the second that sells guns in Jersey City — and a growing desire for protection.

“It’s a lot of first-time gun owners,” he said. “Even friends of mine — people who hate guns — are coming in here. I’m not sure why, but I know we’re not the only store facing this issue. It has been difficult getting guns and ammo from manufacturers. There is a lot of demand right now.”

Colon joined the Army after graduating from Hudson Catholic in 1996, serving from 1999-2012 in the infantry. Because of this, he said he understands the importance of gun safety and gun knowledge, offering classes through his store on 548 West Side Ave.

The classroom training, which is four hours, is done at the store, Colon said. Then there’s two hours of training at a local range.

“We provide marksmanship training through Ace of Spades, our training sister company,” he said. “We teach not only the skills necessary for home defense, but the safe handling and storing of guns in the home.

“I wanted to take the knowledge and skills taught to me as an Army infantry soldier and sniper, and translate that to the civilian community. I want my passion for the sport to be passed down, as it was to me, but in a safe and meaningful way.”

The classes come at a cost — unless you have one characteristic.

“If people buy a gun from me and I notice that they have no clue on how to operate it — they’re asking me, ‘How do you put bullets in it?’ — I automatically give them a class for free,” he said.

Colon said it’s part of the responsibility he feels to the area.

“I want to give back to the community,” he said. “I see the increase in gun ownership — and I know a lot of individuals are first-time gun owners. I don’t just want to put guns out on the street.”

Colon said he has gotten a very warm reception from the community. He feels his store is providing a needed service.

“We offer a safe and secure way to purchase hunting and shooting gear in the surrounding area at a competitive price,” he said. “We also offer extended services such as (security officer) training and provide security services through Stealth Security.

“Our hope is to be a one-stop-shop for individuals interested in the security industry to get licensed, learn marksmanship, purchase their firearm and work for our security company all under one roof.

“We do transfers for firearms purchased online and stock an assortment of ammo and tactical gear for beginners to experts in the shooting sports and within the law enforcement community, offering discounts to veterans and law enforcement on a daily basis on everything that we carry, including guns.”

A first-time business owner, Colon — a native of Puerto Rico — said he is glad to be both a minority- and a veteran-owned business.

So far, he said, life as a business owner is going great.

“Nothing stays on the shelf very long,” he said. “The biggest problem is finding the inventory, because the manufacturers can’t make them fast enough.”