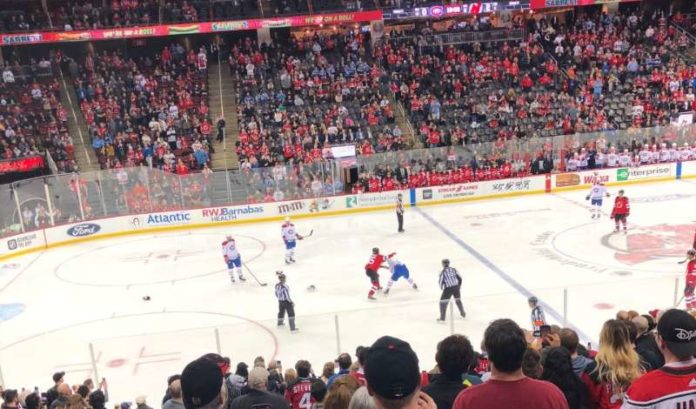 The New Jersey Devils will be allowed to have fans in the stands at the Prudential Center for the rest of the NHL season — limited to 10% capacity — beginning with their March 2 home game with the New York Islanders, Gov. Phil Murphy announced Monday morning.

Officials with Seton Hall University said school officials are meeting with Prudential Center officials Monday to discuss the ability of the school to have fans at its final home game, March 3 against the University of Connecticut, which will be played at the Pru Center in Newark. The school is hopeful to have fans at the game.

Fans will not be required to show results of a COVID-19 test to attend games or events, Murphy said.

It is unclear how many spectators will be allowed to attend games. The Devils have used 19,500 as their capacity number in the past — meaning 1,950 fans would be allowed.

Murphy, speaking on WFAN, said the state will allow the 10% capacity for indoor sports and entertainment facilities with seating for 5,000 fans or more, beginning at 6 a.m. March 1. Outdoor venues will be able to be filled to 15% capacity.

The men’s and women’s basketball teams at Rutgers University do not have any home games currently scheduled for March.

The capacity was one of two announcements regarding sports. Murphy also said, effective immediately, parents and guardians will be allowed to attend collegiate events. Murphy put in a similar ruling earlier this month for high school and rec sports.

The decision impacts the Devils more than any other team. The Devils have home games with the Rangers on March 4 and March 6 — and four additional games during the month. The NHL’s regular season extends until May.

The ruling also impacts entertainment events, although it is not clear how soon any may be scheduled.

Murphy said the 10% and 15% capacity limits are subject to review — and could go in either direction — based on the ever-changing health metrics.

Murphy, in fact, said he would be “shocked” if capacity limits for New York Giants, New York Jets and Rutgers Scarlet Knights football were not higher in the fall, based on the vaccination rollout.

Devils President Jake Reynolds said the organization is excited to bring fans back — and stressed the facility’s health and safety precautions will be top notch.

“Prudential Center’s principal commitment is to the safety and health of all our fans, players, staff, partners and community members,” he said in a statement. “To make sure that we are implementing the most effective practices to keep everyone safe at our facility, Prudential Center has utilized RWJBarnabas Health’s medical expertise in crafting our policies. When our doors open on March 2 as the Devils take on the New York Islanders, the protocols instituted for the health and safety of our loyal fans will be on full display. This is a big step towards the return of sellout crowds in Newark.”

Reynolds said the governor’s announcement is something the arena and its officials have waiting for and working toward for months.

“This is a day toward which our entire staff has been planning, working and looking forward to for the past 11 months,” he said. “Those who enter the building will feel confident that our process and protocols are focused on making their safety the No. 1 priority. That includes maximizing social distancing, minimizing contact and using products and technology to ensure the well-being, safety and enjoyment of our fans and attendees.

“The fan’s journey has been developed to provide consumer confidence from the street to the seat, and we can’t wait to feel their energy welcome them back to the Prudential Center to cheer and celebrate Devils’ victories in person.”

Keeping the fight on site: Why SMG’s LeBenger feels partnership with...