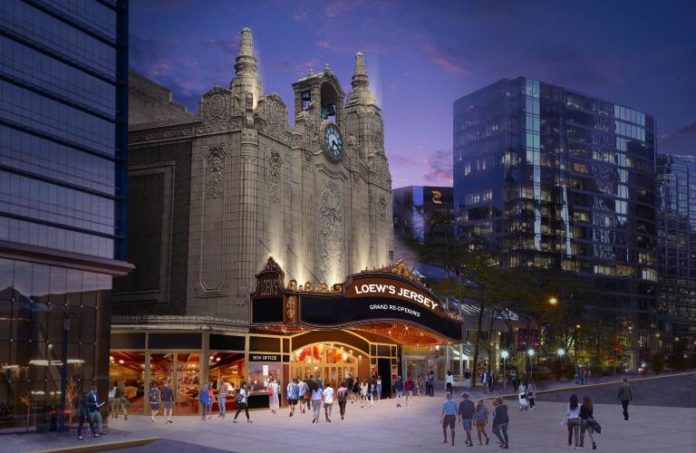 Jersey City Mayor Steve Fulop on Monday announced a new partnership with Devils Arena Entertainment to move forward on a unique $72 million agreement for the transformative restoration of the historic Loew’s Theatre in Jersey City.

The revitalization intends to transform the century-old theater into a state-of-the-art, 3,300-seat venue to attract both superstar and up-and-coming performing artists, serve as an engine of economic development and hub for the local Journal Square community, and expand Jersey City’s growing reputation as an unparalleled arts destination in New Jersey.

DAE, the largest purveyor of entertainment in New Jersey and operator of the Prudential Center, one of North America’s top 10 most booked arenas, will help bring in acts.

Jersey City officials have long said the majestic Loew’s is intended to be an integral part of the revival and rehabilitation of the Journal Square area — Jersey City’s historic city center and one of the busiest transportation hubs in the region.

Called “the Most Lavish Temple of Entertainment In New Jersey” when it opened in Jersey City more than 90 years ago, the Loew’s Theatre has remained underutilized for decades following various roadblocks, until the Fulop administration stepped in and worked with local residents and community group Friends of the Loew’s with a united goal of reviving the local gem and uncovering its untapped potential.

Construction is expected to begin in 2022, with an anticipated opening in 2025. Part of the agreement ensures priority to hire local, Minority- and Women-owned Business Enterprise firms to help revitalize the regional economy and get people back to work.

“The Loew’s restoration is decades in the making, and so I am encouraged and excited to partner with Devils Arena Entertainment, a reputable entertainment company and operator of the globally successful Prudential Center, as we take this monumental step forward in our commitment to restoring Loew’s Theatre to its former glory, reviving Journal Square and growing our arts community,” Fulop said. “This one-of-a-kind partnership signifies our long-term planning for a post-pandemic future where we’re confident arts and culture will be a staple of life.”

Hugh Weber, president of Devils Arena Entertainment, said the company is thrilled to be involved in the facility.

“The Loew’s Jersey Theatre is an iconic community treasure that has played a long, distinguished role as Jersey City’s premier arts and entertainment venue,” he said. “The opportunity to partner with Mayor Fulop, the Friends of the Loew’s and the local Journal Square community to revitalize this historic venue is a privilege for us.

“As the operator of the nearby Prudential Center, one of the top entertainment destinations in the United States, we know the importance that live performances play in galvanizing communities and stimulating economic activity.  We envision Loew’s Jersey Theatre as a catalyst to help the citizens of northern Jersey get back, literally, on their feet to celebrate world-class arts and music.”

The rehabilitation and operation agreement ensures DAE, a proven owner and operator of industry-leading venues, will work closely with Jersey City and Friends of the Loew’s to return the iconic theater to the world-class centerpiece of arts and entertainment it once was. The $72 million deal looks to optimize venue performance for the artists and audiences, including:

Once it is open, Weber said, DAE will continue to work with Jersey City to provide another extraordinary resource in support of the surrounding community.

For those who don’t know, here is background on Loew’s Jersey, as provided by Jersey City officials:

The Loew’s Jersey is one of five “Wonder Theaters” built in the tristate area in the late 1920s by the Loew’s Corp., which had created and owned MGM Studios and was at the time one of the most important presenters of both live stage shows and movies.

The five theatres were movie palaces — a unique building type, which, somewhat belying its name, combined large seating capacities and some of the most ornate architecture ever built with then-state-of-the-art movie projection capabilities and also stage and backstage facilities to support large touring shows.

The Loew’s Corp. spared little expense in building the five Wonder Theaters, making them exceptionally ornate and functionally capable compared even to many other movie palaces. The Loew’s Jersey cost $2 million to build — a very large sum at the time.

In its first years, the Loew’s hosted stage shows with some of the greatest stars of the 1930s, including Cab Calloway, George Burns, Gracie Allen and Duke Ellington. Movie stars including Judy Garland, Humphrey Bogart and Jean Harlow made promotional appearances there.  The Four Seasons gave a concert at the Loew’s in 1967.

How long should our state be in a state of emergency?

Real Estate
Eric Strauss -
February 24, 2021
JLL Capital Markets has arranged a $34 million construction loan for a major cold storage facility on the border of Elizabeth and Newark, it...

Education
ROI-NJ Staff -
February 24, 2021
Cooper’s Ferry Partnership CEO Kris Kolluri has been selected as one of 25 business school graduates worldwide to be named to membership in the...

Education
ROI-NJ Staff -
February 24, 2021
The Hackensack Meridian School of Medicine has been granted provisional accreditation by the Liaison Committee on Medical Education, bringing it nearer to full accreditation. The...

Health Care
ROI-NJ Staff -
February 24, 2021
The Cancer Center at Inspira Medical Center Mullica Hill has earned three-year reaccreditation from the Commission on Cancer, a quality program overseen by the...

Hope. And a sense of normalcy: Why sports matters in a...