Restaurateur Adenah Bayoh and co-founder Zadie B. Smith will have a grand opening Wednesday of Cornbread Newark, the latest location of their farm-to-table soul food restaurant.

Cornbread Newark, their second location in New Jersey and third overall, is in the retail space of 915 Broad St., a new 84-unit residence in the heart of downtown Newark that Bayoh co-developed. 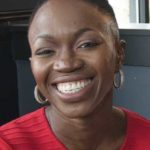 By the time Adenah Bayoh was getting her fourth, fifth and sixth ovations from the crowd at the Newark Regional Business Partnership event last March, three things were becoming clear to the approximately 200 people in the room:

We have long been admirers of Bayoh’s success, chronicling her American dream story that includes coming to this country at 13 — escaping the civil war in her native Liberia — graduating from the Newark Public Schools system and then Fairleigh Dickinson University before founding Adenah Bayoh and Cos., which is the parent corporation of an IHOP franchise; her own fast-casual restaurants, Cornbread; and several residential and commercial redevelopment projects in North Jersey.

It’s why she was honored on the latest ROI-NJ Influencers Power List and why she was asked to be on a panel discussing the future of real estate development in Newark.

Given the opportunity, Bayoh did much more than just recite her resume. She challenged the audience of Newark business leaders and developers.

(READ MORE of our profile by clicking here.)

And read more from ROI-NJ on Cornbread:

Bayoh, who was listed on the 2021 ROI Influencers: Power List earlier this week under the real estate category, said she was pleased to be able to open the restaurant during a pandemic — and during Black History Month.

“The ongoing public health emergency has been devastating for the Newark community and for the restaurant industry,” she said. “But, given the space I occupy as a Black woman and daughter of Newark, it was important for me to push forward with safely and responsibly opening this new location to provide employment opportunities and hospitality services for the residents of the city.

“Giving back to the community is a major priority in all of my business ventures.”

Smith, also the founder, owner and executive director of Zadie’s Nurturing Den in Summit, as well as Zadie’s Early Childhood Center and Zadie’s of the Oranges in East Orange, is grateful for the opportunities.

Smith said the Cornbread franchise fits perfectly in her portfolio during these difficult times.

“We want our farm-to-table soul food to provide comfort and convenience and to give people a feeling of family even if they can’t be with their loved ones.”

Bayoh is a true thought leader on urban development by members of underserved communities.

Developing in urban areas can be a challenge — and one in which she relies on a number of partners, she said.

“Cornbread Newark would not be possible without my co-founder, Zadie B. Smith, our amazing team, our partners and the Newark community,” she said. “I can’t thank Mayor Ras Baraka and the city of Newark enough for continuing to welcome me with open arms.”

Cornbread signals the latest benchmark in the ongoing renaissance of Newark despite the COVID-19 pandemic. Bayoh, an alumna of the Newark public school system, has been a major figure in the city’s redevelopment efforts, beginning when she purchased IHOP Newark in 2017, saving 50 jobs.

Bayou is the founder and CEO of Adenah Bayoh and Cos. — the parent corporation of IHOP franchises in Paterson, Irvington and Newark, and a real estate development portfolio with hundreds of millions of dollars in urban redevelopment projects.

The first Cornbread restaurant opened in Maplewood in the fall of 2017. A second location opened in 2019 near Pittsburgh in West Mifflin, Pennsylvania.