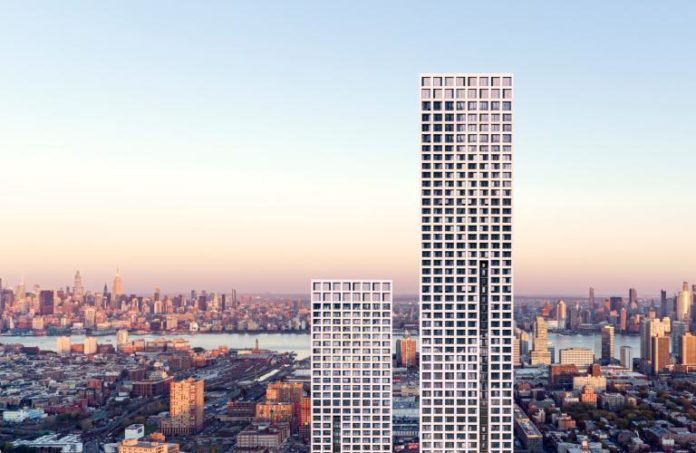 Leasing will begin in March for the second luxury rental tower at the Journal Squared mixed-use property in Jersey City, according to developers KRE Group and National Real Estate Advisors.

The new, 68-story building is the tallest in the three-phase project, and will bring 704 modern apartments to the Journal Square neighborhood, according to a news release. The building was designed by HWKN Architects, and includes layouts ranging from studios and microstudios to three-bedroom apartments. Occupancy is slated for April 1.

“Journal Squared is the centerpiece of the resurgent Journal Square neighborhood,” Jonathan Kushner, president of the KRE Group, said in a prepared statement. “The swift lease-up of the development’s first phase demonstrated that it’s not just stakeholders who believe in this area, but residents who want a modern living experience surrounded by the unique cultural and historic charm and commuter convenience that define Journal Square.”

The Marketing Directors will serve as exclusive marketing and leasing agent for Journal Squared 2.

Journal Squared 2 adds nearly 70,000 square feet of shared amenities to the community, bringing its total to nearly 100,000 square feet of features between the two current buildings. These include a Sky Lounge, outdoor deck with two pools, coworking spaces, a fitness center and more.

“We’re excited now to expand our offering with a new collection of residences and amenities that will bring even more residents to this dynamic location,” Kushner said.

The first property in the project is a 53-story building with 538 residents. It reached fully leased status in just 10 months. The completed property will total 1,838 units over three buildings, as well as 36,000 square feet of retail and restaurant space, and the Magnolia Landing pedestrian plaza.