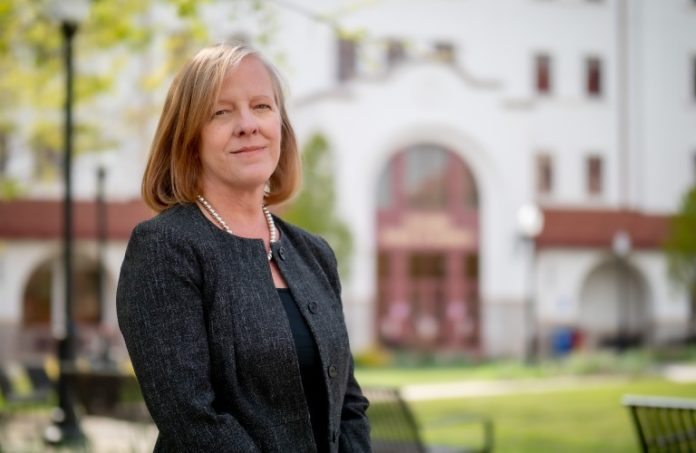 Montclair State University is in the process of selecting a new executive director for the Feliciano Center for Entrepreneurship & Innovation. And Kimberly Hollister — the dean who is heading up the search committee — said the next leader should not necessarily look or act like the previous two.

Hollister, who worked with both founding Director Dennis Bone and Carley Graham Garcia, said the position and the center should be constantly evolving.

“But, I think that there’s room to take a step back and look at the opportunities that are in the state and some of the changes that have happened because of COVID and say, ‘Where do we want to go next?’

“Resilience is critical. Enabling students to learn how to pivot is critical. And, so, just like businesses can’t run with one vision that never changes, I don’t think the center can, either. I think it needs to evolve.”

The position has been open since the start of the year, when Garcia left for a job with Amazon.

Elizabeth Rich, the director of strategic partnerships and initiatives, has been the acting director since then, but is not a candidate for the top job.

Hollister said the school should begin talking to candidates in two to three weeks, but she said the school will not stop taking applications until it finds a successor. Her hope is to have a new leader in place by June 1 — in time to properly prepare for the fall.

The job entails managing four to six people and a budget of nearly $1 million. But, more than that, Hollister said it requires someone who can interact with the state’s business leaders.

“One of the key parts of this position is going to be, how do they continue to build external relationships and bring resources into the center — and those resources can be financial as well as personnel,” she said.

Hollister spoke with ROI-NJ about the opening. Here’s a bit of the discussion, edited for clarity:

Kimberly Hollister: I think there’s an emphasis on the second two. We’ve separated the academic component of entrepreneurship. That lives in an academic department, in our management department. So, we’re not looking for the scholarly researcher who focuses on entrepreneurship to run the center.

We’re looking for someone with an external focus. So, the person who has been involved in the entrepreneurship community — through chambers, through industry groups, through Meetup groups. The person who’s walked the walk, in terms of innovating in their own career. The person who’s a collaborator and brings people together.

But, I told the committee the other day, ‘I don’t want to rule out people just because you don’t think that they look like who’s running the center before.’

ROI: Are you getting different candidates than you did when you eventually selected Graham Garcia in the summer of 2019? Has the pandemic made more people interested?

KH: I think so. I think the security of a job that people have been in for a long time isn’t there right now. I think there’s a lot of uncertainty about what the corporate workforce looks like in the next three to five years. So, people who are at a point in their career when they’re either looking to expand within or to shift organizations find it’s an interesting thought to change to something completely new — perhaps to a job at a public institution, where we’re serving a really diverse group of students and other stakeholders.

ROI: You mention diversity. How important is it for the school to hire a woman or a person of color for this role?

KH: My charge to every search committee that we have here is that is we ensure that we have a diverse pool of qualified applicants and qualified finalists. I don’t have a look in my head of, what is that person going to look like? Is it a man? Is it a woman? Are they Hispanic? Are they Black? But there needs to be a mindset that, not only is the state diverse, but the university community is an extremely diverse community — and that’s part of what gives us our value.

When you look at all the factors of ‘How do you innovate? How do you generate new ideas?’ you need diverse perspectives. The center attracts College of the Arts students, to the nursing students, to science students and business students. There are so many different views and perspectives that they come in with from their programs, but also from their backgrounds. We have a lot of students that are very interested in social impact, too. Candidates will have to be able to speak to how they’ve worked with diverse teams and speak to how they value diversity in ideas and in people. That’s critical.

ROI: The ROI-NJ audience is filled with successful business leaders. What would you tell someone who is thinking of applying?

KH: I would tell them to think about the opportunity and the potential impact that they can have in this role. It’s a center that’s been unique across the campus in terms of attracting students from all over. And that diverse audience of students is also what has attracted a lot of organizations to want to partner with us and want to be part of that ecosystem.

It’s an energizing environment. And I think there’s the potential to impact, how do other businesses look at coming into the state — and how do we keep our people and our businesses here?