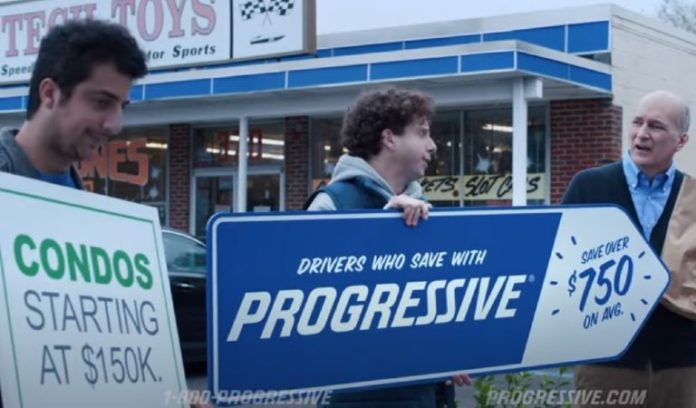 There have been calls from some of his national vendors, saying they saw the store on TV. There have been visits from customers who no longer live in the area and hadn’t been to the store in decades.

And, each day, there are at least a half-dozen groups of people who come to the store for the first time.

But for Jim Parodi, the longtime owner of Tech Toys in Parsippany, the most unusual thing that has happened since his store started to be featured in multiple ads for Progressive Insurance came in a phone call from a collector in the Midwest. A garbage truck enthusiast, you could say.

“They used a vintage garbage truck in one of the ads,” Parodi said. “I guess it’s a model of a garbage truck that they don’t use anymore.

“This guy called me, all excited about the truck. I think he wanted to buy it. I think he collects real garbage trucks.”

Actual garbage trucks may be one of the few things Parodi doesn’t sell in his store, which sits on the corner of a strip mall of retail shops on Route 46 West in Parsippany, right before the interchange with Interstate 80. He and his wife, Janet Parodi, opened it in 1983.

It’s an old-school hobby store, complete with radio-controlled cars, boats, airplanes and more. There are puzzles and gadgets. And model figures to create in plastic, resin and metal.

Parodi, of course, has all the paints needed to touch them up, all the tools needed to fix them — and all the replacement parts his loyal customers know they can’t find anywhere else.

This is not a video games crowd.

“Everybody that comes in here says, ‘I haven’t seen this since I was a kid,’” he said. “We attract a whole different group of people.”

And, apparently, someone who does national ad campaigns.

It was last fall when a site selector for commercials walked into Tech Toys, looking to get permission from the owner to have his store used in an ad.

Parodi, 69, said the selector told him he was looking for a “certain look.” It’s not clear if that look involved the Tech Toys storefront or the old-style Parsippany Plaza sign that’s in the parking lot. Perhaps it was both.

Parodi quickly agreed. The landlord did, too, giving permission for the filming crew to shut down the strip mall to shoot the ad — and permission to fix up the area as needed.

The film crew put in a raised sidewalk, benches, small bushes — whatever they needed for whatever particular ad they were doing.

“It was all things they made or brought in,” Parodi said. “They were able to put it up and take it down without a problem.”

Filming lasted for three days, from 7 or so in the morning until 5 or so at night, he said.

Parodi was stunned by how many people were involved.

“It had to be at least 100,” he said. “They had people doing the set, the lighting — people up on cranes. It was incredible.”

It was nothing like when Parodi hired a company to make a cable ad a few years back.

“They had two or three people,” he said.

Parodi and his wife allowed the crew to clean up his storefront, too. The boxes that block one of the entrance doors were taken out. The window signs were cleaned up. They didn’t mind. It had been a while since they had an update.

During breaks and after the shooting, they met some of the people involved, including the producer, Jared Hess — who is better known for having produced the movie “Napoleon Dynamite.”

When the crew was finished, Parodi said he wasn’t sure what to make of it.

“We saw the storyboard, but you never know how it’s going to turn out — how visible the store would be, how much they would cut out,” he said. “They told us they had enough footage to do 10 commercials.”

Parodi was stunned when the ads began to run.

The commercials started airing at the beginning of the year. Parodi can’t give a date — he just knows it’s the day his phone started ringing off the hook and sales jumped through the roof.

“We’re up double or triple in February,” he said. “I can’t put a number on it. I just know we’ve been selling stuff faster than we can get it.”

He gives a lot of credit to the ads — many of which prominently feature his store.

One ad has a supposed employee wearing a Tech Toys vest. The employee is an actress — and Tech Toys doesn’t have vests.

“They not only made the vest, but they took our business card and copied our logo perfectly,” he said. “It’s been a home run as far as the visibility of the ad, plus the number of times it’s been on.”

Losing three days of business has worked out just fine.

Truth be told, Parodi said, his business already was on an upswing. The pandemic, he said, actually has been a big boost for what he sells.

“We have had parents coming in for months, looking for things for their kids to do — things they can do with their hands,” he said. “Old-time toys.”

Now, they come by looking for what they saw on TV — a store seemingly from a different era. They quickly notice some of the things in the commercials are not there.

But Parodi said nothing beat the family who came up from Virginia who stopped by last weekend — looking for one of the signs that appeared in ad.