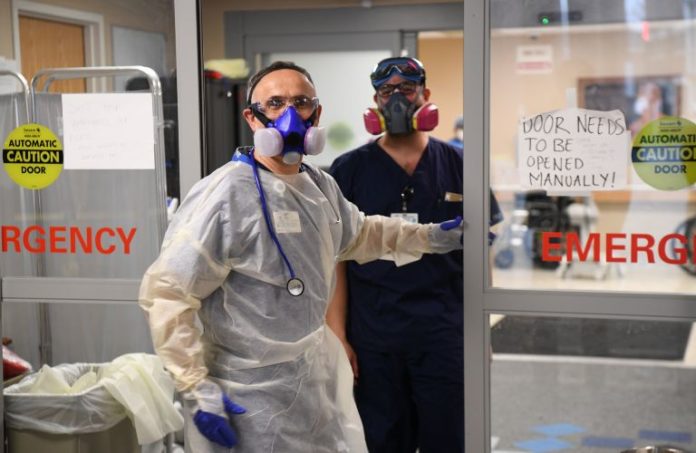 When the first known COVID-19 case was confirmed in New Jersey — at Hackensack University Medical Center, a year ago Thursday — most people in the state were still trying to figure out what it was and how, or if, it would impact life in the state.

Bob Garrett said he already knew what was coming.

Garrett, the CEO at Hackensack Meridian Health, said the first confirmed case wasn’t a precursor of what might be coming — but a guarantee that it was. He already had seen the impact of the virus firsthand, over a video screen.

“Days before, we had a video conference with colleagues at a hospital in Italy, where they were really getting swamped with COVID patients,” Garrett said. “When we heard the words of the doctors there — and when we saw the video footage behind them, we couldn’t believe it.

The images were far worse than anything to do with Ebola or SARS or any of the other recent health crises that had reach New Jersey, Garrett said.

“So, as soon as we heard that the first patient was confirmed at Hackensack, I had a pit in my stomach,” he said. “I just thought, ‘Oh my gosh, this could be Italy — we could be like Italy in a few weeks.’ And sure enough, New Jersey, New York, we’re just like Italy within weeks.”

Garrett and all the team members at HMH were reflecting on that first patient. There was a moment of silence at all 17 hospitals. There are blue spotlights — which will be shown for a month.

Garrett said it has been moving to think back to what the state went through — and no system was hit as hard as HMH.

Six weeks after that first patient, HMH had 2,000 COVID-19 patients in its hospitals. Its network — which includes hospitals, nursing homes and urgent care centers, was caring for more than 3,000.

“We were totally in the in the epicenter of what was happening with respect to the pandemic here,” he said. “It was pretty rough there for the first couple of months.”

This story from March 14, 2020, remains one of ROI-NJ’s most-read of all time. Just a few days into the COVID-19 outbreak last year, Holy Name Medical Center’s Mike Maron offered a look inside his hospital as it grappled with the onset of the pandemic.

It was so bad that Garrett had moments of doubt.

“I am such an optimist by nature that I just felt like we were going to get through it,” he said. “I kept saying that and I believed it — and I wanted to boost morale all around me. But, it was in the back of my head that we can only go so far.

He salutes the staff — and the state — for doing so.

“We responded well as team members on the front lines,” he said. “It was just such a heroic job — and we didn’t know a lot about the virus, then.

“There wasn’t universal masking. We didn’t know exactly how it was spreading. We literally had to learn on the fly, treat patients in an unprecedented manner — and do it with volumes of patients coming at all at the same time.”

He said the state’s assistance — and the assistance of other health care leaders — helped.

“We were working really collaboratively with the with the Department of Health and with the Governor’s Office,” he said. “I had confidence that we were all rowing in the same direction; we were all trying to make the best decisions in a collaborative way as best we could.”

And all trying to avoid thinking about the worst-case scenario. Of course, in Garrett’s case, he already had seen it.

“I did maintain optimism all the way through,” he said. “But I have to say, I did have that pit in my stomach on that first day, because I had seen and heard the words of colleagues in Italy.”