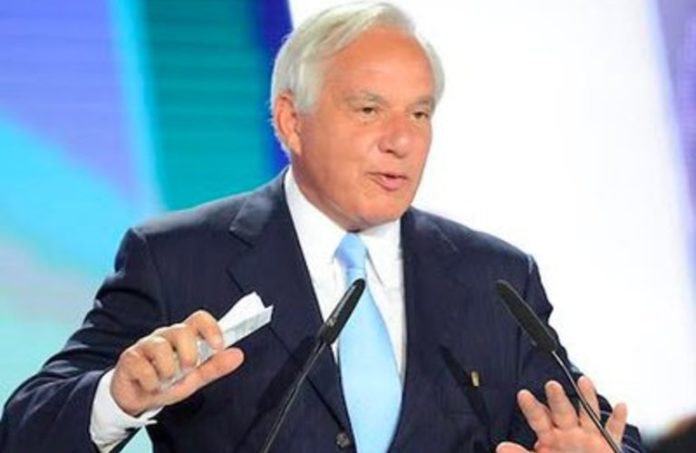 Former U.S. Sen. Bob Torricelli served with President Joe Biden for six years in the Senate. He called Biden a friend and said he is glad he is president.

He also said Biden is wrong on what Torricelli believes is a push to quickly reopen the Iran nuclear accords that President Barack Obama’s administration — in which Biden was vice president — signed, only to have them dismantled by President Donald Trump.

Torricelli feels the sanctions against Iran are working — and that they could lead to the ultimate conclusion for the U.S., the fall of the current Iranian regime, if given the chance.

“I’m supportive of the administration, I want Joe Biden to do well, but he’s wrong on this issue and needs to be convinced by every means possible to allow the sanctions to play out, to allow the regime to come to its natural end.

Torricelli was the keynote speaker at a recent webinar, “Changing Times: What it means for your business,” which was sponsored by the New Jersey Jewish Business Alliance.

Torricelli left Congress after a political contribution scandal, and now works in real estate development in Florida. But he did serve on the Foreign Relations Committee while he was there. It was from that knowledge that he gave his address.

Torricelli said the Biden administration seemingly has shown it is committed to reentering the nuclear accords with Iran. The problem, Torricelli said, is that the situation in Iran has changed dramatically in the past five years.

“So, whatever position people may have had five years ago, aren’t necessarily in positions that people need to have today,” he said. He gave three key reasons why:

“Those accords had no restrictions on Iranian ballistic missile production,” he said. “The Iranians have made enormous progress in ballistic missiles in these five years, as evidenced by the recent attack on American air bases in Iraq, where they not only delivered a series of 12 missiles with enormous power, but in an accuracy that none of us believed that they possessed.

“So, whether or not Obama was right in not tying ballistic missile production to nuclear accords, there’s no sense redebating that now. I would argue that, even if you didn’t think that then, that it is irresponsible in my judgment to reenter on the nuclear court without some assurance about missile production.”

“Whatever mischief the Iranians were up to with their sponsor of terrorism in Iraq and Syria at the time, it is now a sustained, global effort on a different scale, because they have succeeded in their consolidation of power in Iraq, they have succeeded in keeping Assad in power in Syria, they are gaining traction in the war in Yemen, they have gained an upper hand in Lebanon.

“Iranian terrorism is more powerful than it was five years ago.”

“The Iranians have now reached or are breaching the 20% purity level with weapons-grade material,” he said. “It is the ultimate Genie you cannot get back into the bottle.”

Torricelli fears the Biden administration will ignore these factors at the peril of the country.

“You cannot disinvent the fact that they have now gone to this level of purity, and are this much closer to a nuclear weapon,” he said.

Torricelli said he even admits Trump had it right.

“I would argue, as a lifelong Democrat, and putting all partisanship aside, the situation is also fundamentally different,” he said. “And that the sanctions put on the Iranian regime, for whatever you think of Donald Trump, there’s only one way to describe it: They worked.

“The Iranian economy is in a tailspin. There is an enormous tension between the Revolutionary Guards and the ruling mullahs.”

Now is not the time to intervene, Torricelli said.

“My fear is that we’re going to throw a lifeline to the mullahs just when they’re on the brink,” he said. “I know people that believe the Iranian regime was ready to collapse the last 40 years. It wasn’t. But just because it didn’t, doesn’t mean that it’s not now.

“The Biden administration is now speaking with the South Koreans about releasing a billion dollars of the foreign exchange that they have had under sanction; (it) is exactly the wrong lifeline at the wrong time.”

Torricelli touched on a few other subjects during his talk:

Breakthrough relations with Israel, Morocco and the United Arab Emirates

“It isn’t really about affection for Israel, it’s about a united front against Iran,” he said. “But, in international politics, like in life, sometimes you take friends no matter what their motivation. It’s just good to have them on your side. This is a game-changer.

“A great deal of the Arab community has come up with the mind that opposing Iran is more important than keeping fidelity with the Palestinians or the radical elements of the Arab world. That is important; I give the Trump administration full credit. I am, however, equally concerned about the continuous arrangement of the Israeli political establishment from France, Germany, to a lesser extent Britain and Italy. It is a division that cannot go on another generation.”

Torricelli feels it is a fallout from strained relations between the Obama administration and Israeli Prime Minister Benjamin Netanyahu.

“You could tell (by) the time it took for Prime Minister Netanyahu and Joe Biden to speak after the election that this is not how two close allies deal with each other. And it should be a matter of real concern.

Anti-Semitism in the Republican Party

“The issue speaks for itself,” he said. “The rise of, not simply anti-Semitism, but rabid anti-Semitism that we saw on the far right (during) the attack on the Capitol, and the slogans that were used, the things that were said that do not bear repeating.

“I think that does not speak for the broad leadership of the Republican Party. Anytime there’s a coalition which has those elements in it, it needs to be recognized and understood, at least monitored.”

Murphy says schools will get chance for extended cleaning — and...