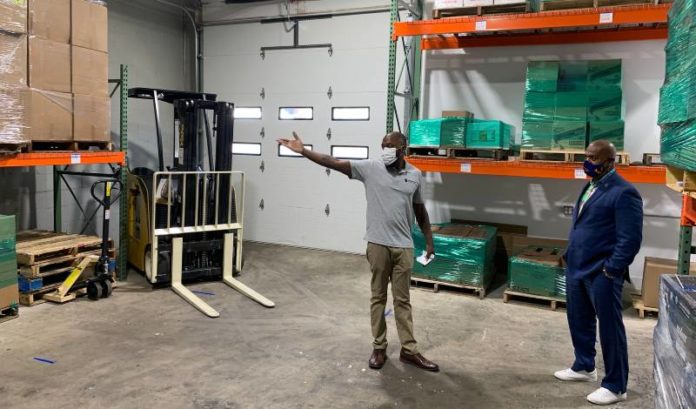 Newark has so many of the qualities needed to be an industrial hotbed: access to the port, the airport, rail and road; a diverse and eager workforce; and proximity to an incredibly dense population area — certainly including New York City.

These are just some of the reasons why Amazon opened a 640,000-square-foot delivery station on Delancy Street last fall.

And, although Amazon is in the process of opening up at least a half-dozen more such facilities this year, it is not scheduled to open another in Newark.

One reason: There is not enough available land.

The city’s ability (or inability) to capture a part of the still-booming industrial market was one of the takeaways at the recent webinar, “The Way Forward for Newark Real Estate Development,” an annual event by the Newark Regional Business Partnership.

Brad Griggs, a senior manager of economic development at Amazon, said space is hard to find.

“From the Amazon perspective, we’ve certainly seen a very tight industrial market play out over the last year,” he said. “As we’ve looked to expand our operations throughout the Northeast and mid-Atlantic, sites are at a premium.”

CenterPoint currently is developing 49 Rutherford St. in Newark — a 185,856-square-foot facility on 12.62 acres. The firm acquired the space in November 2019.

Borner said the firm is fortunate to be able to get such a big piece of industrial property.

“Putting together sites of scale is extremely challenging,” he said.

It certainly appears that way.

According to Borner, overall vacancy in industrial in the state is 2.4%, but it drops to 1.7% in Newark. He says Newark has 52 million square feet of industrial in 733 buildings.

“But, of those 733 existing buildings,” Borner said. “Only seven of them are considered core, or buildings that are in excess of 30-foot clear and built since 1997. That’s 4% of the market on a square-foot basis. That is the lowest of any submarket tract north of Exit 6 along the New Jersey Turnpike, and it’s not even close — the second-lowest is double that.

“It gives you an idea of how in-demand the real estate industrial market is in Newark, in particular.”

It doesn’t mean companies such as Amazon will stop looking. Griggs said the potential benefits are great, as it’s close to customers and a solid workforce.

It’s just not easy to do — in Newark or the region, Griggs said.

“For every industrial site that we’re moving into, we consistently hear from communities how they are looking at other product types, that they want to diversify their portfolio to diversify their city’s economic picture,” he said.

Both Borner and Griggs said the outlook for industrial in Newark will remain challenging in 2021 and the years to come.

“I think there’s some big projects coming online in the Meadowlands, but, candidly, there’s not much by way of total square footage in Newark,” Borner said. “And that’s just because the opportunities are minimal, which is why a lot of tenants are going further south.

Griggs said there are a number of possibilities.

“I think you’re going to see projects pushing south, pushing west or moving into the Orange, Putnam county areas of New York that compete regularly with the northern New Jersey market,” he said. “That’s where there may be an opening of space and a path to the entitlements process to get these sites, to be able to get shovels in the ground.”

Griggs said it’s a matter of regions understanding what they can and should offer — meaning they will attract more clients if they change their focus to much-needed 150,000-200,000-square-foot industrial warehouses.

“Versus trying to shoot for the stars on something that they might not be able to land — say, an office environment — coming out of COVID,” he said.

Given their options, those in the industrial market would prefer Newark and North Jersey — if they can find the space, Borner said.

“It sounds crazy, but as high as rents are in Newark and in the northern New Jersey submarkets, they’re still 50% of what rents are in the New York City,” he said. “That’s why I think Brad and Amazon, and other logistics tenants still look at New Jersey as a relative bargain.”

More than 700 units of housing (and maybe supermarket) coming to...

Shoppes at Lafayette to be redeveloped to include housing complex