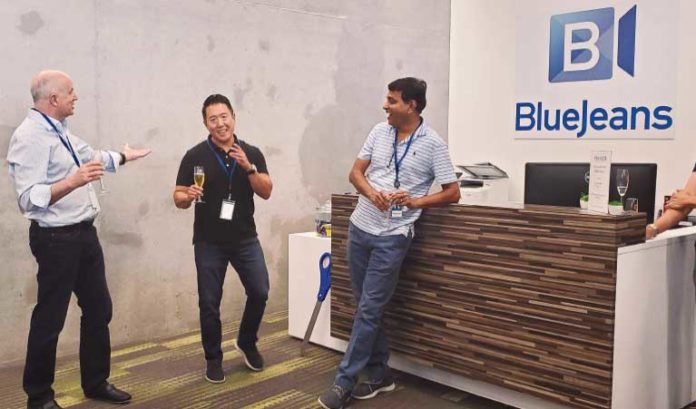 Krish Ramakrishnan knows how popular culture works — and he knows his product isn’t a part of it right now.

When it comes to video conferencing platforms, Ramakrishnan recognizes that “Zoom” is one of the words that has become part of the American lexicon during the pandemic. It’s branding you can’t buy.

Ramakrishnan, the creator of BlueJeans — a video conference networking service he sold to Basking Ridge-based Verizon last summer — is confident the BlueJeans platform will win out in the long run. Especially with the business community.

He has plenty of reasons to feel this way. BlueJeans not only has the business-to-business connections and marketing power of Verizon behind it, the platform has 10 years of success with industry giants on its side.

So, while you may not be familiar with BlueJeans, you do know the companies that have embraced it for years: Facebook and many other Fortune 100 companies.

Ramakrishnan, who was awarded a graduate degree in computer science in 1983 from what was then known as Monmouth College, said the BlueJeans platform — with the help of Verizon — will soon become embedded in many aspects of life, everything from telehealth to tele-education.

The platform, he said, meets all the needs of businesses — small, medium and large — including the most important feature: It is incredibly scalable.

So, Ramakrishnan is OK with the fact he never has heard anyone use BlueJeans as a verb.

“I think the Zoom thing will be ephemeral,” he said. “Yes, they are a household name right now. Yes, people talk about ‘Being on Zoom’ — in fact, people reference all video calls as ‘Zoom calls’ right now.

“But I do believe, as technology evolves and more vertical applications of video calls become apparent, our purpose-built, business-grade platform — one built with support, security, administration control and all the different things businesses need — will win out over a generic conferencing tool.”

Ramakrishnan makes his business case for BlueJeans by Verizon by saying BlueJeans was designed for business to fill a collaboration void in the workplace — especially when it came to high-quality video.

Ramakrishnan said business applications have been top of mind since he began developing BlueJeans in 2009. He’s quick to rattle off the business benefits:

Security: “For the most part, you don’t hear about users encountering security issues such as meeting ‘bombing’ with BlueJeans,” he said. “Being proactive about security and privacy has always been a core tenet of our culture at BlueJeans. That’s been a big reason that big enterprises have been attracted to BlueJeans. It’s designed with security in mind.”

Universal interoperability: It’s the ability to have people be on various platforms at the same time.

“When you pick up a phone and call somebody, you don’t worry about whether somebody else has a different phone mechanism, whether it is an iPhone or a landline, the phone just automatically gets connected because the universal interoperability is built into the system,” he said. “Video is not like that.”

“The idea of BlueJeans was to unite all of the different video communications by making BlueJeans interoperable and delivering it as a cloud service. So, I can be on the BlueJeans app on my laptop or mobile device and somebody else can connect to BlueJeans using a Cisco or Polycom device. Or they can be on a Microsoft Teams conference, but join using a Poly device and the BlueJeans connector. You can mix and match your devices. That’s what we mean.”

Versatility: Ramakrishnan said BlueJeans can connect employees in work-from-home situations just as easily as it can connect those outside the corporate campus to a larger, townhall-style meeting. The platform is often used for large-scale employee communication, as well as for hosting interactive events ranging from webinars to user conferences to live entertainment broadcasts.

Support: Ramakrishnan said supporting the BlueJeans product for the customer once it is deployed is key.

“This is where we shine,” he said. “We provide all the mechanisms and tools and the analytics for them to troubleshoot and help them through their connectivity issues. That’s big when you have a corporation that has 50,000 people. You don’t want them to be overwhelmed with support calls from people having home Wi-Fi issues, network issues or I-don’t-know-what-happened-to-me issues.”

Scalability: Ramakrishnan said he feels BlueJeans works for every business. “The product scales, from work-from-home situations, to small business, to midsized companies, to large enterprise.”

Ramakrishnan said the main reason BlueJeans is not better known to consumers is because the company has been very focused on the business user.

That may soon change.

Ramakrishnan’s title includes both companies: He is chief of strategy and product of BlueJeans by Verizon.

That’s what happens when you sell your company to a technology giant. Of course, Ramakrishnan knew this before he closed the deal. He had started and sold two other technology companies before he created BlueJeans — both to Cisco.

It’s the question Krish Ramakrishnan says he gets the most. To him, blue jeans as clothing represent the essence of the platform — they’re safe, sturdy and work in any environment.

Ramakrishnan said he understands he loses some control of the product, but he said the benefits of being acquired are far greater.

“The positives are a really extreme level of funding, overwhelming resources to hire and innovate, massive distribution channels to take the product to market and a huge marketing budget when you do so,” he said.

Ramakrishnan said he selected Verizon — which owns Yahoo — as much as Verizon selected him.

“Verizon’s a company that has huge business to business platform,” he said. “They have Yahoo Finance, they own a media group, a consumer group, they are the largest handset distributor in the world and so on.

“It is my view that BlueJeans technology will be part of every Verizon video delivery and more going forward.”

And then, there’s the ability to react to changing times, such as remote learning.

“Let’s take education, where many people are using Zoom right now,” he said. “Zoom was not purpose-built for a classroom; it was built for collaboration. Basically, you have no other tool other than a video call; all the other things have to be done externally.

“With our purpose-built video application, we can do K-12 remote learning in an integrated classroom setting that combines attendance, homework submission and everything else. You can have that versus a collaboration or conferencing tool.”

Ramakrishnan has lived in California for three decades — but his connections to New Jersey still run deep.

After he graduated from Monmouth, he worked for a company in East Hanover and then moved to Bell Labs in Holmdel. He warmly talks about the apartment he once had in the Jockey Hollow section of Morristown.

And, while he said he has been to the Verizon headquarters in Basking Ridge previously, he didn’t go during the negotiations last summer because of the pandemic.

For Ramakrishnan, it was the perfect proof of concept for BlueJeans.

“We were able to do a deal this big over video — proving that this medium can actually do really big deals,” he said.

The deal reportedly was in the neighborhood of $500 million.

Try doing that on a Zoom call, he joked.