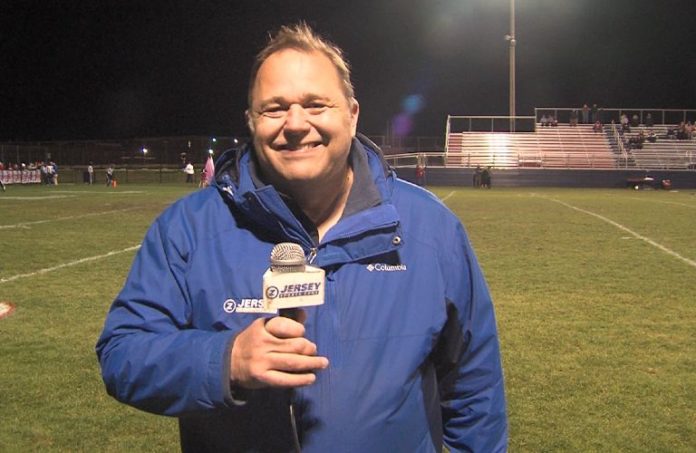 Although not always as heart-wrenching as the Manasquan High School basketball team’s Andrew Solomon scoring a game-winning, 1.4-seconds-left overtime shot in a conference final after losing his father to COVID-19 … high school sports games are full of a million little dramas.

But the question is — increasingly often, as newsrooms covering high school sports shrink — who’s going to tell those stories?

A new startup, Jersey Sports Zone, wants to do it. And they’re assembling a team based on the philosophy that it’s not just about someone showing up to report the score. Like the context behind Solomon’s game-winning layup in the Shore Conference boys basketball final, a lot of what’s most compelling can’t be found on the scoreboard alone.

The name of the digital media operation’s CEO, Dale Florio, might ring a bell. That’s because, as he readily admits, he’s leading a “double life.” He’s one of the state’s most high-profile lobbyists at Princeton Public Affairs Group, but moonlights as a high school sports enthusiast who just completed an 18th year as a varsity basketball coach for three different schools.

He also has Rich Chrampanis as a chief operating officer, who was swayed by what he called a “seismic shift” in sports coverage. More of the audience was consuming content online and through social media platforms, instead of the television networks where he spent a career as a sportscaster.

“A lot of people said: ‘You’re not on TV anymore. You’re going to have a hard time,’” Chrampanis said. “But you could make the argument that I have more viewership now than when I was on television. We’re approaching 13 million views on our YouTube channel. Our social media following is growing by leaps and bounds.”

The website, which markets itself as the first to focus solely on premium video content of all New Jersey varsity boys and girls sports, has seen jumps in its YouTube and Facebook video views after completing a three-year trial run of covering just Jersey Shore competitions.

As the media outlet stretches its coverage now across the rest of the Garden State in a grab at being a household name for high school sports coverage, its follower numbers on a social media platform such as Twitter have already moved north of 18,000. Its revenue, carried by advertising and subscriptions, also continues to climb.

Florio credits that to filling a well-loved niche in a time when, as he explained, “weekly papers covering high school sports had gone from five pages down to one page.” Building a web-based, video-driven media outlet from scratch allowed them to score more points over competitors.

“From a business model standpoint … it’s easier in many respects to do a startup than to adjust a legacy operation,” Florio said. “We’ve been able to grow our (digital coverage) from the ground up in a way that it would be more difficult for a media conglomerate to switch gears with all their overhead.”

And there couldn’t be a more passionate audience. Parents or other relatives of athletes race to find videos — and Jersey Sports Zone webcasts 20 games a week, too — and share them with friends, coworkers, neighbors … basically anyone within a several square-mile radius.

During the pandemic, when it’s more difficult for individuals to attend high school games in person, that demand has only heightened.

The content Jersey Sports Zone hosts is also meant to be viewed by recruiters and college coaches, who similarly have kept a safe distance from sports events during the pandemic. So, the media outlet is serving a special purpose right now: Getting exposure for athletes who may otherwise struggle to attract notice.

“The Class of 2022 has been really impaired by the pandemic when it comes to recruiting,” Chrampanis said. “And it’s already an extremely stressful process when everything is normal.”

Chrampanis added that the website hangs its hat on hosting content of incredible local athletes. And its clips of those young Jerseyans have already gotten some prime-time exposure, such as on ESPN SportsCenter’s “play of the day” compilations.

Chrampanis described one local hockey player, Chris Farinacci, whose last-minute goal from across the rink made that major network’s Top 10 spotlight.

“When you’ve got a Manasquan kid at No. 3 on that, and a Lebron James dunk was No. 6 … you can only imagine how the athletes react,” he said. “It’s a great thing we’ve been able to do.”

The startup’s clips can also be found regularly on the Jumbotron of the New Jersey Devils, as part of a partnership with the professional hockey team.

Right now, Jersey Sports Zone covers about 1,500 games across a year’s three sports seasons. Chrampanis and Florio said they’d like to double or triple that down the road. They added that they receive an astounding number of messages on social media asking them to cover particular varsity leagues or games.

Doing that would take bolstering the website’s squad of multimedia journalists. Chrampanis lists as part of their current roster Mike Frankel, a journalist who in late 2019 had to switch hats from sports reporter to news reporter when a shooting erupted at a Pleasantville-Camden high school football playoff game he was covering. A 10-year-old boy died several days after being struck by a stray bullet during that incident.

Florio won’t feel like his venture has maxed out on demand for local sports coverage until its journalists are covering every high school basketball and football game in the state — and other sports besides.

In fact, for a tip-off to Florio’s aspirations for Jersey Sports Zone: He’s already securing URLs with the names of each state in the continental U.S. followed by “Sports Zone.”

New restaurant to open in place of shuttered eatery in Wildwood

Cannabis business application acceptance off to a strong start