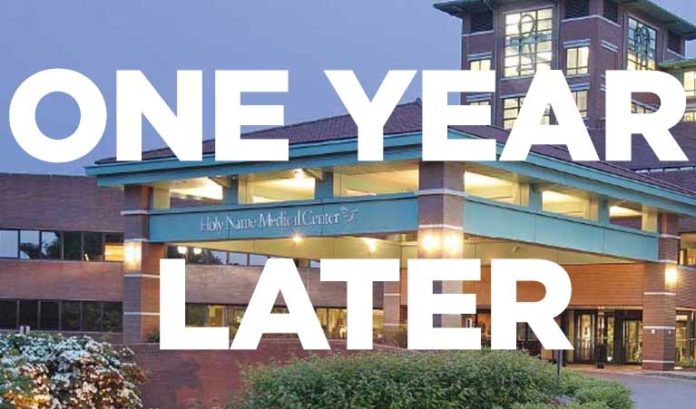 Mike Maron first realized his words about the COVID-19 outbreak — and the March 14, 2020, news story they appeared in — were having great impact when he got calls from two of the state’s top health care thought leaders: Brian Gragnolati, the CEO of Atlantic Health, and Dan Straus, the CEO of CareOne.

“They said, ‘Mike, is this story accurate, is what you’re saying true, are these numbers real?’” he said they asked.

When Gov. Phil Murphy’s administration reached out — and the governor himself, by the end of the day — Maron realized the details he was providing about life inside Holy Name Medical Center in Teaneck were serving as a wake-up call for the state.

Maron was the CEO of a hospital that was being overrun by COVID at a time when no one truly understood what it was and what was coming.

The story on ROI-NJ.com, “Life at the epicenter of N.J.’s coronavirus outbreak,” described the situation in graphic detail and in real time.

Soon after, health care colleagues from around the country — and college friends he hadn’t heard from in 40 years — saw the story and started reaching out.

And then, Maron got an email from someone in Hawaii — a person he had no connection with whatsoever.

“They sent me a letter thanking me, because they were panicked by all the misinformation in the media,” he said. “I was taken aback.

“It was then that I realized we were the canary in the coal mine — the first ones to ring the bell and tell the truth about what was going on with this virus in our hospital.

“The wide distribution put a lot of people on alert. So, I’m grateful that occurred, because it needed to be done.”

The story went up on ROI-NJ’s website on a Saturday. By the end of the weekend, thanks to widespread sharing on social media, it had — in internet terminology — gone viral.

It led to appearances by Maron and other Holy Name officials on national television programs and in national publications.

The story, which went live a year ago this Sunday, remains ROI-NJ’s most-read, by far. And it still is being talked about today, Maron said.

“I’m amazed at how often it still comes up,” he said. “People will tell me: ‘Our entire office was talking about it. We didn’t understand what was going on until we read it.’”

Within a week of the story’s publication, Murphy shut down the state.

Here’s the thing — the numbers that Maron described in the story seem tame now:

New Jersey, after all, has more than 400 patients in ICUs across the state this weekend.

Read the story that started it all: 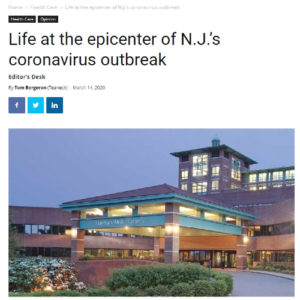 Eleven cases. Six of which are in the ICU. And 40 more patients under observation.

All at Holy Name Medical Center in Teaneck.

The numbers are growing by the day. So quickly that not all of them are included in the state’s official coronavirus count.

It’s why Holy Name CEO Mike Maron thinks all the attention the coronavirus has been getting in New Jersey — from the school closings, banning of public gatherings, suspensions of pro sports leagues and even the fights over toilet paper and bottled water — is not enough. Not even close.

But those numbers were alarming then. They were numbers that were not being reported at the time. To be clear, it wasn’t that the media was hiding the numbers — it was that only a handful of hospitals in the country had such numbers.

Maron was determined to share them. He said at the time:

“I’ve seen a bunch of headlines. Some people are out there saying: ‘They’re overplaying this. It’s not that contagious. It’s a little bit like the flu.’ It’s not.

“What we’ve seen in the patients who ultimately are positive is that things can turn very rapidly. We had a patient that we were thinking about releasing — he seemingly was recovering — and then, two days later, he was put in the ICU. The flu isn’t like that. People need to know this.”

People needed to take this seriously, Maron said then.

And Maron soon realized he was not heeding his own advice. By the end of the week, Maron had tested positive for COVID-19. He was sent home to quarantine — though he continued to work — for two weeks.

“It was my own fault for not being honest with myself early on about not feeling well — writing it off to fatigue and long workdays and not eating right and a whole host of things, because I’m not a person who ever really gets sick,” he said.

“That lack of truthfulness on my part put other people at risk. I infected my family.”

It changed the way Holy Name has operated since.

“When I returned, I said, ‘Learn from my mistake,’” he said. “Everybody’s got to be honest. To this day, every employee who swipes in, myself included, has to make an attestation with two buttons: I’m symptom-free or I have symptoms.

“It’s a moment of pause for everybody before they get into the workplace to say, ‘Am I really OK to be at this workplace today? Because, if I’m not, the risk of getting all my colleagues or the people I come in contact with sick, is too great.’

“It’s a pause to think about this.”

A year ago, Maron sounded the warning that New Jerseyans needed to take COVID-19 seriously.

The question today: Does Maron feel he needs to issue a similar warning? Does he fear the state’s residents have stopped taking the virus seriously — that they have moved on, figuring the introduction of vaccines equals the end of the pandemic.

Maron’s not as definitive this time around. He knows health care systems everywhere are exponentially better equipped to handle a COVID-19 case. But, he warns that residents can’t take that for granted.

“The progress we’ve made in such a short period of time is absolutely amazing compared to anything else that has occurred in the last 100 years of medicine,” he said. “But, I would say we’re only halfway on the learning curve.”

Maron said his biggest concern today is that people may not realize that the virus is not going away with the vaccine.

Just like a year ago, Maron said the facts are the facts.

“The truth is, after all this time — all of the positive cases and all of the deaths — we really don’t know for certain how this virus is transmitted, how long it’s active, what its incubation period is, whether you are contagious if you’re asymptomatic, how long does it survive in airborne particles or how long it survives in droplets on surfaces?

“Those answers have not been definitively resolved.

“We’ve come a long way. There’s a lot more we know today than we did a year ago. And we’re better off for it. But, there’s still an awful lot we don’t know. And we shouldn’t be arrogant about that. We should be humbled by it and pay attention to it and be prudent and cautious about it.”

LeBenger: How COVID-19 will be game-changer in health-care delivery