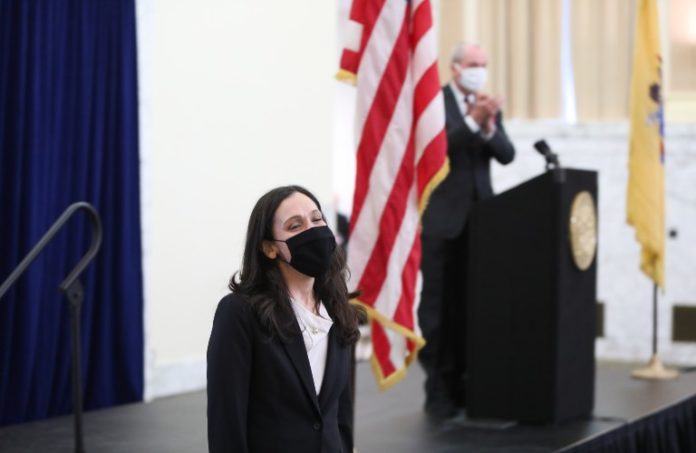 Gov. Phil Murphy announced he will nominate a former clerk to Justice Ruth Bader Ginsburg to be the next associate justice on the New Jersey Supreme Court. And he did it at Ruth Bader Ginsburg Hall on the campus of Rutgers University-Newark — and on what would have been RBG’s 88th birthday.

But, for as much as his intention to nominate Rachel Wainer Apter to succeed the retiring Jaynee LaVecchia is about looking back to Ginsburg’s legacy, it is being done with an eye toward the future.

Wainer Apter, who currently serves as the director of the Division on Civil Rights in the office of Attorney General Gurbir Grewal, matches Murphy’s vision for the state and the country.

“In the wake of Justice Ginsburg’s passing, the advances in civil rights that she spent a lifetime fighting for are under threat in Washington,” Murphy said. “State courts have never mattered more, and I am honored to nominate Rachel Wainer Apter, who clerked for Justice Ginsburg and followed in her footsteps as a civil rights lawyer, to the New Jersey Supreme Court.

“Over the past few years, Rachel has defended New Jersey’s DREAMers in federal court, drove Facebook to confront hate speech on its platform and proposed reforms to prevent sexual harassment. I know she will continue to serve all New Jerseyans on our state’s highest court.”

The appointment will first be sent to the New Jersey State Bar Association’s Judicial and Prosecutorial Appointments Committee. With the committee’s approval, Murphy will proceed with a formal nomination, subject to advice and consent in the state Senate.

As of today, there appears to be little that will stop Wainer Apter from succeeding LaVecchia, who will retire at the end of the current court term Aug. 31.

Wainer Apter, 40, would be the second young woman appointed to the bench by Murphy, who nominated Justice Fabiana Pierre-Louis last year. Wainer Apter is seven weeks older than Pierre-Louis. The two potentially could serve the state for 30 years — or longer, if the state extends the mandatory retirement age, which is now 70.

That retirement age could give Murphy an opportunity to dramatically shape the court, should he win reelection in the fall. Two current justices — Faustino Fernandez-Vina and Barry Albin — will be forced to retire next year.

In her current role, she is responsible for enforcing the New Jersey Law Against Discrimination, the nation’s oldest anti-discrimination law, which prohibits discrimination on the basis of race, creed, color, national origin, ancestry, sex, age, marital status, sexual orientation, gender identity, disability, pregnancy or breastfeeding, and a variety of other protected characteristics in the workforce, places of public accommodation, housing and lending.

The division also is charged with preventing and eliminating discrimination in New Jersey by both receiving, investigating and acting upon complaints alleging discrimination, and by affirmatively issuing reports and publications, conducting investigations and implementing educational and community outreach programs to address systemic discrimination.

Prior to her current role, Wainer Apter served as counsel to the attorney general, advising on civil rights and immigration matters, including leading the New Jersey team that defeated a motion by Texas and seven other states to end the Deferred Action for Childhood Arrivals, or DACA, program.

Prior to joining the Attorney General’s Office, Wainer Apter worked at the American Civil Liberties Union on cases concerning voting rights, reproductive freedom and the right to be free from discrimination. She served as counsel in Masterpiece Cakeshop v. Colorado Civil Rights Commission, which considered whether a baker who refused to sell a wedding cake to a same-sex couple was exempt from Colorado’s antidiscrimination law. Wainer Apter also argued and won a disability discrimination appeal in the U.S. Court of Appeals for the Second Circuit and led a task force regarding investigations into incidents of sexual harassment and sexual assault on college campuses.

After law school, Wainer Apter served not only as a law clerk for Ginsburg, but also for Judge Robert Katzmann on the U.S. Court of Appeals for the Second Circuit, and Judge Jed Rakoff on the U.S. District Court for the Southern District of New York. She also worked in the Supreme Court and appellate practice at Orrick, Herrington and Sutcliffe, where she served as lead associate or lead attorney on dozens of cases in the U.S. Supreme Court and federal and state courts of appeal, including three Supreme Court merits cases, a successful petition for certiorari and a successful petition for en banc rehearing.

Her nomination was lauded by many, including Grewal.

“Rachel is an intellectual powerhouse and one of the country’s most thoughtful and passionate civil rights litigators,” he said. “She was one of the first people I brought onto my leadership team as attorney general and, since then, I’ve had the privilege of working with her to improve the lives of all New Jerseyans.

“During her tenure as director of the Division on Civil Rights, she transformed the organization into a national leader and innovator. Rachel will no doubt serve in the finest traditions of our state’s high court, where she will continue to use her many talents to ensure equal justice under law.”

Wainer Apter, in the release announcing her nomination, offered her thoughts on the law.

“The law is not simply a subject to be debated or a puzzle to be solved, but something that profoundly impacts the lives of individual people each day,” she said. “The cases that the New Jersey Supreme Court hears concern issues of fundamental importance to our state and to all of us as individuals, including how our society will live up to the promise of equal justice under the law.

“I am grateful beyond measure for the faith that Gov. Murphy has placed in me with this nomination and will do my best to serve the people of New Jersey if confirmed.”