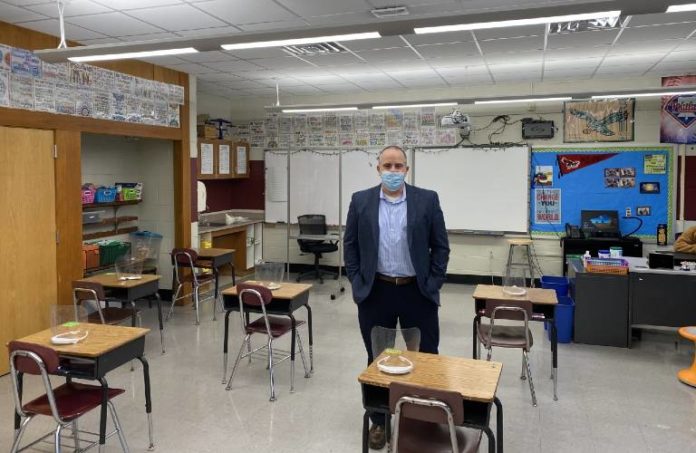 Superintendent Mark Maire was thrilled to see first lady Jill Biden — a teacher herself — tour an elementary school Monday in Burlington County. She was touting how the $1.9 trillion stimulus package would help students return to in-person learning.

In-person learning not only is good for education, but for the mental health of students. Of course, you don’t need to tell that to Maire. The K-8 Morris Plains School District has had in-school learning at its two schools all year, going all-remote on just a few occasions.

“The teachers and the community feel it’s critically important for our kids to be in school and have on-site learning,” Maire said. “We’ve always felt that way, so we used that as the starting point last summer and worked backward to find a way to make it work.”

So, when Maire hears elected officials talk about funding for schools — $130 billion is set aside just for reopenings — he asks this in response:

When the state divvies up the billions of dollars the stimulus is specifically sending to New Jersey to help its schools, will his district be able to recoup the money it already has spent to provide in-school learning?

“Some COVID-related relief should be specifically designated to districts who have demonstrated a commitment to keep schools open and operational,” Maire said. “What we’ve found so far is that the state is using the title 1 formula, which is based on demographics, such as the number of students getting reduced lunches, to allocate the money.

“It does not factor whether a school district has been open or not. That’s a frustration on our end, because we spent well over $400,000 outside of our budget to keep our buildings open. The amount of COVID relief money we’ve gotten from the state is $60,000. That barely covers a month of our increased costs.”

A spokesperson for the New Jersey Department of Education did not directly answer questions about whether schools that have managed to stay open would be reimbursed for their additional costs. The spokesperson said the department had not yet received details regarding how the latest appropriation could be distributed.

Assemblyman Jay Webber (R-Parsippany) is one of the General Assembly members from the 26th District, which includes Morris Plains. He also lives in the town.

On Monday, Webber introduced two bills, A5482 and A5483, that address school funding.

A5482 would distribute the next tranche of discretionary funds the state gets from the federal government to schools that were either full time in-person or hybrid during the 2020-21 school year, he said.

A5483 deals with the next school year. It says schools that stay remote in 2021-22 will not get their full allotment of transportation or security funds from the state, as they did this year. That funding will go to schools that open, Webber said.

“Both bills are intended to make the statement that the state believes that in-person education is important, and that it is the best way to teach children,” he said. “We are going to reward those districts that do the right thing — and begin to take funding away from those districts who do not open their doors.”

Webber’s bills even define in-person learning: School districts that offered all the students in the district in-person education on 75% or more of school days would qualify.

Webber will spend the next week looking to gather cosponsors. He already has one supporter — an unusual ally on the other side of the aisle and in the other legislative body: state Sen. Paul Sarlo (D-Wood-Ridge).

Sarlo is the chair of the Senate Budget Committee. He’s also the longtime mayor of Wood-Ridge. He understands school budgets better than most. And he said Maire and the superintendents of other all in-person learning districts have a valid argument.

“In-person districts incurred significant costs,” he said. “I think we need to look at some type of redistribution of funds to support the school districts that made those efforts. It’s a matter of fairness.”

Sarlo does not have a bill of his own. But he yields plenty of power.

“I’m going to be lending my name and my support to this, both through the budget process as budget chair, and vocally,” he said. “We need to take a hard look at school districts that have made the extraordinary effort for their students.”

Like every other district, Morris Plains shut its schools last March and did not reopen for the rest of the school year. Spring activities such as sports, the play, the school dance and the trip to Washington, D.C., were canceled. Graduation was virtual.

Maire, the administration and the teachers were determined to not let that happen again.

In the summer, the district surveyed parents and found 80% said they wanted — and were comfortable with — in-person learning. A survey of the teachers produced essentially the same numbers, he said.

Maire said that relationship and partnership between all groups has been crucial from the onset — and is a big reason why Morris Plains has not had the issues of some other districts, such as South Orange/Maplewood and Montclair, where parents are starting to go to war with the teachers union.

“I would be lying if I said we didn’t have any challenges,” Maire said. “There was a lot of concern from staff, and I understood it. I had my own concerns. But, we worked through them and figured it out as we went along.”

The district, which has approximately 600 total students in a K-2 school and a Grades 3-8 school, set out to remake the experience.

Officials quickly eliminated everything in the classroom that wasn’t essential, allowing them to create as much space as possible between desks. Gyms, libraries, cafeterias and auditorium stages were converted to classrooms — with the bigger spaces making it easier to hold classes where extra support personnel were needed.

Through it all, there was open communication with the teachers. Maire said that transparency was key.

“We shared with our staff the state of our facilities and HVAC information,” he said. “That was important for them to know, and it really created an open line of communication.

And plenty of extra costs.

Two industrial-grade filtration units were needed for the gym. That was approximately $25,000. The same amount was spent on rollable Plexiglas dividers, which are ubiquitous around the school.

Then there was the increased personnel cost. The district hired an additional full-time nurse. It also hired a half-dozen full-time subs — at the full-time sub rate. The district, which relies heavily on local parents to sub, suddenly had few volunteers. They had to make that move.

“We need them to be here every day,” he said. “You never know when someone is going to register as having a temperature. We need to be ready.”

There is a growing frustration about getting kids to return to in-person learning.

Webber said it’s time for the state to take action. By his estimation, 40% of the districts in the state are still all-remote.

U.S. Rep. Mikie Sherrill (D-11th Dist.), whose district includes Morris Plains, can count four of those 500,000 kids. As a resident of Montclair, her four school-age kids have not been inside a classroom in a year.

On Tuesday, she introduced a resolution in the House of Representatives in support of the safe reopening of schools, calling for the prioritization of teachers in vaccine distribution and highlighting the impacts school closures are having on students across the country.

The resolution notes that the most recent CDC research finds that it is safe to reopen schools as long as safety precautions such as universal masking, social distancing and sanitation/cleaning rules are in place. It also says CDC research has found little evidence that schools have been a major contributor to increased community spread of COVID-19.

Maire could have told her that.

He just wants to know if the federal money that Sherrill and others voted to appropriate will reimburse Morris Plains for doing what is so wanted.

And, here’s the part that really upsets Maire.

Districts that have not found a way to reopen have actually saved money during the pandemic. They have not incurred the extra expenses for cleaning and personal protective equipment — and many may be spending less than they normally would have for transportation, substitute teachers and after-school activities.

“We are very frustrated when it comes to funding,” he said. “We appreciate getting money, don’t get me wrong. But it’s not equitable right now. It’s not.

“You have districts in our county that have not been open since last March that have received millions of dollars in COVID relief funds. That’s an inequity. It’s an imbalance. And it’s not fair.

“You’re punishing districts like Morris Plains, which have demonstrated a good-faith effort to remain open.”

Centenary elects Princeton exec as new chair of its board