Home Opinion Editor's Desk Why Kawaida Towers in Newark will serve as symbol of past —...
Facebook
Twitter
Linkedin 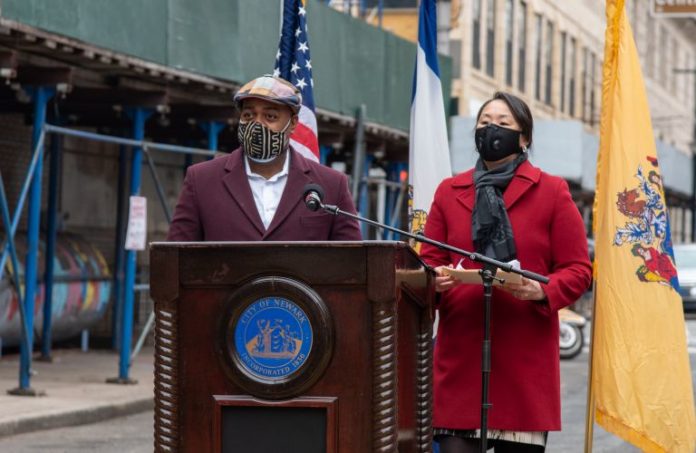 Mayor Ras Baraka tried to deny the historical significance of the announcement — if only for a few minutes.

He told the crowd assembled in Newark on Wednesday that the most important thing about the day’s announcement of the building of Kawaida Towers is that every unit in the 16-story, 66-unit apartment building will be affordable housing.

The building, which will be located on the corner of Halsey Street and Central Avenue, is the first 100% affordable housing project in the downtown area.

“That’s really the most important part,” he said.

And, while that fact bears repeating, Baraka knows it’s not the takeaway of the day. He said as much.

Kawaida Towers was the name of a housing project in the early 1970s that, at the time, was visualized by Black sponsors as the centerpiece for low‐ and middle‐income people in the predominantly white North Ward. (Here’s a good look back.)

The project, which was backed by Baraka’s father, Amiri Baraka, the well-known poet and Newark community leader, never got off the ground. It was blocked in a move that clearly was based on race.

It took nearly 50 years, but there finally is a response.

“What Kawaida Towers says is, ‘Those days are over,’” Baraka said.

“We get to say Kawaida Towers is being built on a corner where a street sign says, ‘Black Lives Matter,’ with Ras Baraka as the mayor.”

Baraka thanked all those involved in the project.

Omni has a long track record of quality affordable housing nationally and in Newark. Mid-Atlantic includes two Newark natives and has completed projects that provide affordable homeownership opportunities in the city.

Kawaida Towers will be built under Baraka’s Equitable Growth Principles and benefits from the advice of elder advisers with intimate knowledge of the originally proposed project. It will feature space for technology education provided jointly by the National Action Network and Rutgers University-Newark, incorporate retail as well as permanent exhibition space, and serve as a model for other development.

National Action Network and Rutgers-Newark will operate Cisco cybersecurity and other STEM-related courses such as coding, website design, 3D printing and more on-site.

All of this are signs that point to the future.

And, while Baraka said there is symbolism in the name and place of the project, he also wants to look ahead.

Baraka said the building, once completed, will serve as proof that projects such as these can get done. It will be a response to all the talk about obstacles preventing development in Newark, he said.

“So, we throw something in the face of that by saying we’re going to build a 100% affordable unit,” he said. “And, not on the outskirts of downtown, but in the middle of downtown on Halsey and Central Avenue — on Halsey Street, where things are booming and jumping and things are happening.

“We’re going to build affordability right here to make sure that those residents who are not usually able to afford the development in this community will be able to have an opportunity to be in this neighborhood, to be in the city. I’m extremely excited about that.”

Siree Morris wants to build houses in Newark — and clear...