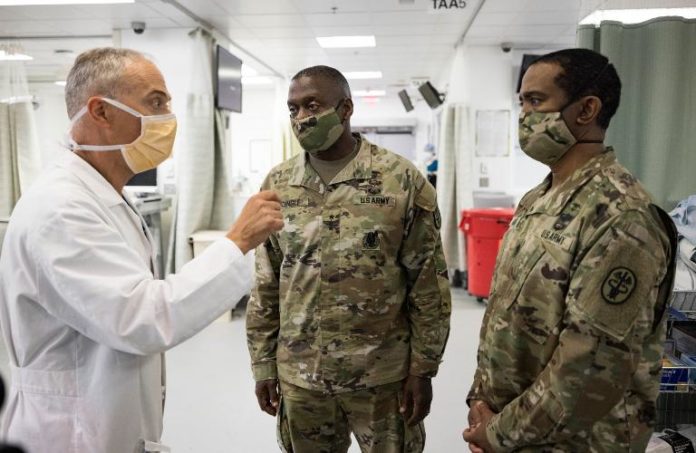 He also wanted to thank them.

Cooper, which has one of the most extensive military training programs in the nation, has become the go-to health care facility for military personnel in the region and beyond. It has become the prime academic health system training military medical professionals before they deploy.

“Everyone said we had to come to Cooper because Cooper is the best, and that Cooper is setting the pace,” Dingle said. “Thank you for your support for the United States Army and the armed forces. You all are generating readiness for the soldiers who are saving lives in combat.”

The relationship between Cooper and the military, always strong, starting to grow more in 2019, when Cooper became the third location in the nation to provide specialized medical training to active duty and reserve personnel from all branches of the U.S. military as part of the Strategic Medical Asset Readiness Training, or SMART, initiative.

SMART was developed by the U.S. Army Medical Command as part of an effort to establish a national network of civilian health care facilities to train and sustain medical skills of the enlisted medical workforce.

Earlier that year, Cooper became the first health system in the nation to enter into an agreement with the Army to provide advanced surgical trauma training to the elite Forward Resuscitation Surgical Team through the AMCT3 program.

Today, Cooper is the only hospital in the county that has trained elite medical providers from every military branch; multiple local, state and federal government agencies; and international partners.

During his visit at Cooper, Dingle met with members of the AMCT3 group currently receiving training at Cooper as part of their three-year embedded assignment. He also toured Cooper’s Trauma Center and other trauma critical care units.

Cooper co-CEOs Kevin O’Dowd and Dr. Anthony Mazzarelli said the hospital is proud of the partnership.

“We are honored that Lt. Gen. Dingle visited Cooper to get a firsthand look at our how our Cooper medical experts, many of whom are current and former military, are providing the highest level of training to the military medical corps to ensure they can effectively treat any case they may encounter in connection with their combat deployments,” O’Dowd said.

“As a high-volume, Level I Trauma Center and leading academic health system, Cooper is uniquely qualified to provide the hands-on training members of military medical teams need to gain the experience and skills to save lives on battlefields around the world,” he said. “We are proud to provide this valuable service.”

Cooper serves as the only Level I Trauma Center for all of southern New Jersey and is therefore one of the busiest trauma centers in the region. Due to its high-volume trauma center and expertise in surgery, and critical care, Cooper provides a wide range of military, diplomatic and field affairs training programs.

Dr. John Chovanes, a trauma surgeon at Cooper and the founding medical director of Cooper’s Section of Military, Diplomatic and Field Affairs, said the hospital values the partnership.

“We have been working cooperatively with the U.S. Army for many years, and it is our privilege to provide this high-level training to the brave men and women serving our nation’s armed forces,” he said. “We are honored to have Lt. Gen. Dingle visit Cooper to review our programs.”

Hackensack Meridian to restructure, creating three regions in the state