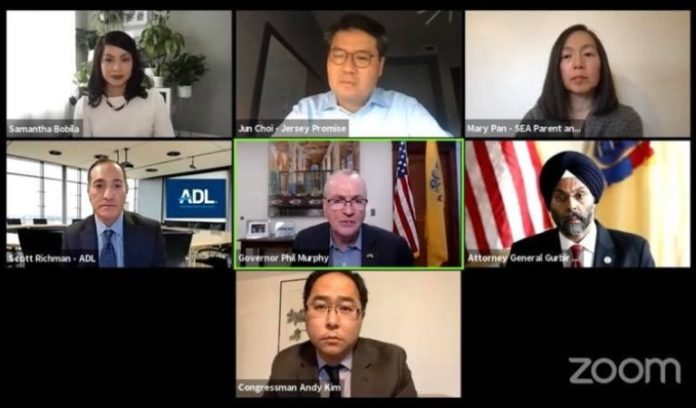 New Jersey, however, was not immune from incidents of hate and bias.

The report was released in conjunction with a roundtable discussion on bias and hate crimes among Murphy, Grewal,  U.S. Rep. Andy Kim (D-3rd Dist.) and others — a day after a shooting in Colorado killed 10 and a week after a shooting in Atlanta killed eight, including six Asian women.

Murphy said the shootings in Atlanta showed there is a hate problem in this country.

“And the data we just released in New Jersey shows that we are not immune to it,” he said. “We held a roundtable today because we need to talk about this problem and tackle it head-on. We’re taking the lead through innovative initiatives to allow us to identify the sources of bias and intolerance, and to take the right steps to eradicate hate in our wonderfully diverse state.”

According to the preliminary data of reported incidents:

At least some of the increase in reported bias incidents likely reflects significant efforts by New Jersey’s law enforcement community to standardize their reporting practices, build trust with New Jersey’s most vulnerable populations and ensure that all acts of bias reported to local law enforcement are immediately reported to the state, state officials said.

Grewal said everyone should take note of the statistics.

“Today’s reporting should serve as a wake-up call to all of us that we must redouble our efforts to push back against this rising tide of hate and intolerance we’ve been experiencing, not just in our country, but also in the Garden State,” he said. “While the conduct of many of our leaders and the failure of social media platforms to take adequate action have helped fuel this rise, in New Jersey, we are doing all we can to not allow hate to become normalized.

“By raising awareness as we are today and through our increased enforcement and education efforts, I am confident that we will begin to see these alarming trends reverse course.”

Kim, a Korean American who recently tweeted about an experience with bias in his past, said action is needed by everyone.

“The fight to stop Asian hate starts with lifting up Asian voices,” he said. “The pain of discrimination has been felt by so many across our state and country, and last week’s murders were a stark example of the high cost of inaction.

“I want to thank Gov. Murphy and Attorney General Grewal for joining me in lifting up the stories of AAPI New Jerseyans. Being heard is an important step towards healing and towards the solutions we need right now to put an end to these horrible acts.”