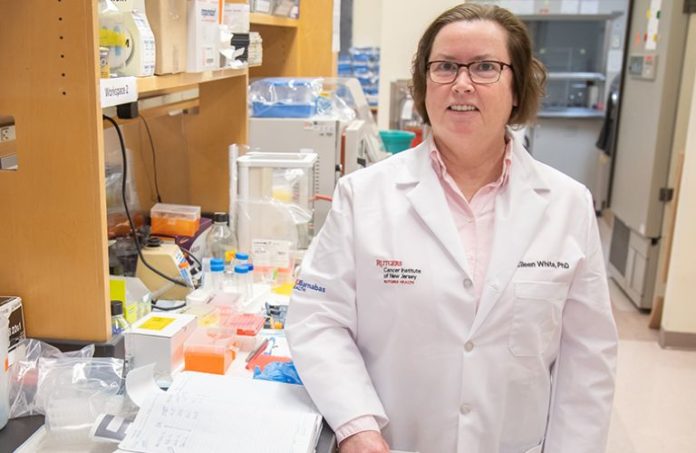 Eileen White, the chief scientific officer and associate director for research at the Rutgers Cancer Institute of New Jersey, is one of 25 scientists around the world elected to the 2021 class of Fellows of the American Association for Cancer Research Academy.

The honor is offered only to individuals whose work has had a significant and enduring impact on cancer research.

White, who serves as deputy director of the institute, is an expert in cancer metabolism. She has made numerous landmark contributions to her field.

The White Laboratory at Rutgers Cancer Institute — named for her — focuses on translational research modulating the apoptosis pathway for cancer therapy and on the role of cellular metabolism in cancer progression and treatment. White discovered and identified critical metabolic pathways through which cancer cells survive, reproduce and evade immune responses, paving new ways to inhibit tumor growth and improve anti-cancer immune responses.

“As New Jersey’s only National Cancer Institute-designated Comprehensive Cancer Center, Rutgers Cancer Institute is distinguished by the cutting-edge research put forth by our team — including the groundbreaking discoveries led by Dr. Eileen White,” he said. “By discovering and analyzing the inner mechanisms of tumor cell growth, survival and proliferation, and, in turn, learning how to manipulate these mechanisms, Dr. White has significantly contributed to the collective body of knowledge that is improving current solid tumor therapies and laying the groundwork for novel therapies to come.”

The mission of the AACR Academy is to recognize and honor distinguished scientists whose scientific contributions have propelled significant innovation and progress against cancer. Fellows of the AACR Academy serve as a global brain trust in the cancer field, helping to advance the mission of the AACR to prevent and cure all cancers through research, education, communication, collaboration, science policy and advocacy, and funding for cancer research.

White, who also serves as a distinguished professor of molecular biology and biochemistry in the School of Arts and Sciences at Rutgers University and the co-director of the Cancer Immunology and Metabolism Center of Excellence at Rutgers Cancer Institute, was humbled by the honor.

“I deeply admire the collective efforts of the AACR Academy to improve cancer research that has fundamentally altered the ways in which we study, prevent, diagnose and treat all cancers,” she said. “I am delighted to now be part of this effort and I am humbled to be recognized by my peers in this way.”

White completed her undergraduate work at Rensselaer Polytechnic Institute and a Ph.D. in Biology from SUNY-Stony Brook.

Her resume of accomplishments is overwhelming: