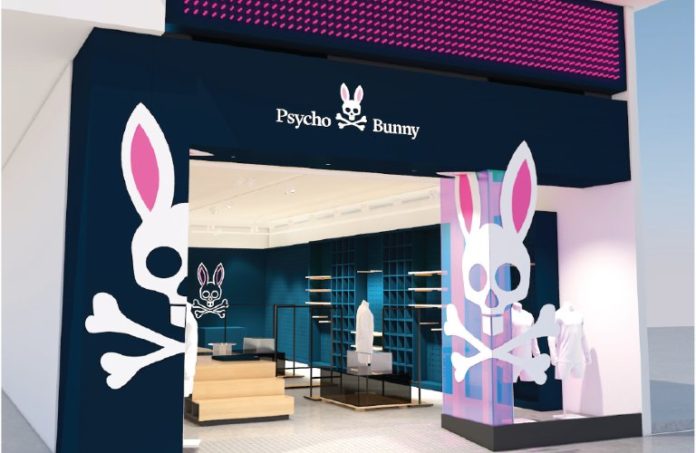 Kenny Minzberg, the chief operating officer of Psycho Bunny, admits the retailer thought about opening its first store in the Northeast in New York City. After all, every company does.

But, after scanning the potential post-COVID landscape, Psycho Bunny opted for the Garden State Plaza in Paramus.

The retailer, which prides itself on the uniqueness — and high quality — of its men’s T-shirts, polos and swimwear, will have its grand opening Wednesday. It’s an event that could signal good things for New Jersey’s retail future.

“While we are interested in Manhattan, we were a little bit concerned about New York City, specifically post-pandemic,” he said. “We saw a positive return of mall traffic post-COVID shutdowns that was encouraging — and we made a multistore deal with (mall owner) Westfield at that time.

“The NYC metro area is important to us, of course. We saw this as an opportunity to be in the market at a great mall.”

Minzberg is confident the upscale brand’s store will become a destination.

The 1,500-square-foot store will catch the eye of shoppers with its prism store window composed of glass panels along with a dichroic film, giving everyone a direct view into the Psycho Bunny world, he said.

Inside, a neon bunny sign will be integrated into a merchandise gallery wall and as well as a large-scale LED video wall.

The clothes, however, are what Minzberg feels will bring customers back.

The company says its clothes are designed for those who wear their personality on their sleeves and their individuality on their collars. In a sea of sameness, Psycho Bunny bills itself as having a classic style that stands apart, with an unconventional logo, unexpected detailing, expressive pops of color and meticulous craftsmanship.

Each piece is created with an emphasis on quality and has tailored details such as mother of pearl buttons, fine piques and tapered seams. Even the company’s signature emblem — a rabbit and crossbones — requires 4,000 stitches to create, officials said.

You have to see it to believe it, officials said. Or, at least, they credit the actual touch and feel of the product for building sales in store — and online.

“Our store expansion has proven to be a very strong driver for e-commerce as well,” Minzberg said. “Markets in which we’ve opened stores have seen big lifts in e-commerce growth, as well. So, we see channels as amplifying one another and stores as our most powerful marketing tools for raising brand awareness and delivering a branded experience to customers who discover us through our stores.”

The question is: Does Psycho Bunny see more stores opening in New Jersey?

The answer: Quite possibly, maybe.

The Paramus location continues the brand’s ongoing U.S. expansion of brick-and-mortar stores that started in fall 2019 with openings in Atlanta, Las Vegas and Hollywood, Florida.

The store looked west in 2020, opening three California-based stores at Century City, Valley Fair and South Coast Plaza. This Paramus location marks the first of more than 15 other stores opening in 2021.

As for whether any of the other 14 will be in New Jersey, Minzburg would only say the brand definitely will have more options in the Northeast.

“Certain leases are still being finalized, but there are more stores to come this year in the Northeast,” he said.