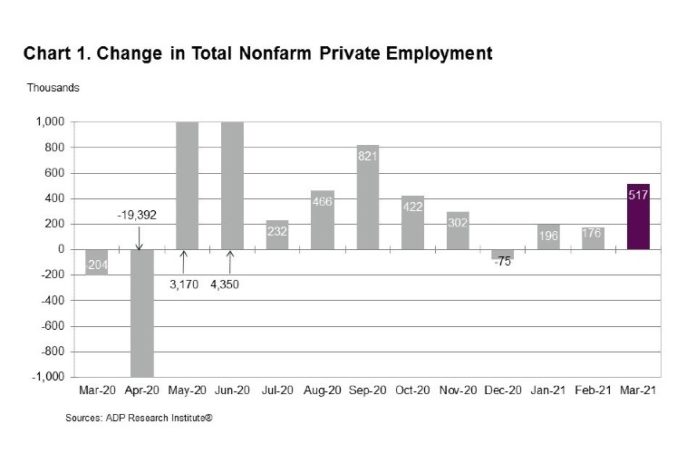 The nation gained more than half a million private-sector jobs in March, according to the latest ADP National Employment Report.

Roseland-based payroll and human resources company ADP said in a news release that its new monthly report found 517,000 jobs added during the month. They were fairly evenly distributed among companies, with midsized firms of 50-499 workers adding 188,000 jobs, small businesses of less than 50 employees adding 174,000 jobs and large businesses of 500-plus workers adding 155,000 jobs.

Among  industries, eight of the 10 posted gains for the month, led by leisure/hospitality with 169,000 jobs added, and trade/transportation/utilities with 92,000 new jobs. Manufacturing led the goods-producing sector with a gain of 49,000 positions.

“Job growth in the service sector significantly outpaced its recent monthly average, led with notable increase by the leisure and hospitality industry,” Richardson said. “This sector has the most opportunity to improve as the economy continues to gradually reopen and the vaccine is made more widely available.”

The only down industries for the month were information, at -7,000 jobs, and natural resources/mining, at -1,000 jobs.

“We are continuing to keep a close watch on the hardest-hit sectors, but the groundwork is being laid for a further boost in the monthly pace of hiring in the months ahead,” Richardson said.

Get with the plan: Women’s Center for Entrepreneurship in Chatham is...