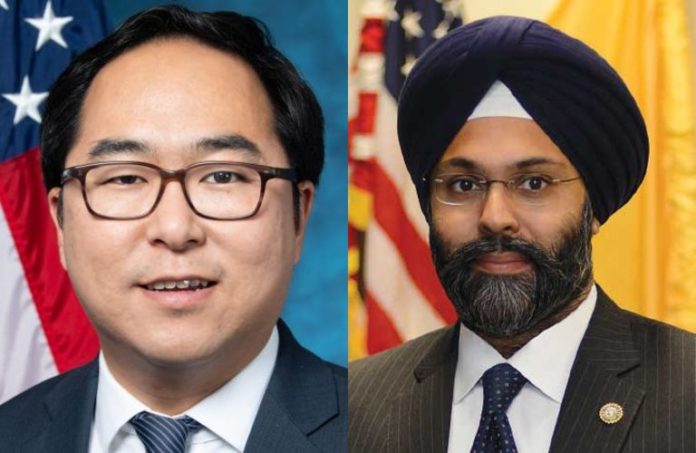 U.S. Rep. Andy Kim was just back from Georgia, back from a trip he didn’t want to take.

He has been meeting with the families of the victims of the recent killings of Asian Americans in the Atlanta area.

“I’ll be honest,” he said. “I wasn’t sure if I should go. I wasn’t sure if the wounds were too fresh for me to come down there. And whether or not I’d be getting in the way of the grieving and the mourning.”

For Kim, hearing other members of the Korean American community tell the stories of their loved ones made it intensely personal.

“These were some of the toughest conversations I’ve ever had in my life,” he said. “Hearing people who were strangers to me talking about their Korean American heritage in words I use to describe my mom — talking about their love of kimchi and Korean barbecue and how hard they worked.”

It was easy to relate, Kim said.

“One line just stood out,” he said. “One person said that her mother worked nonstop to provide for the family and to save up money for retirement. She said about her mother, ‘She worked so hard for it to end this way.’

“And I think about what how my parents have worked for me and my sister to give us the lives that we have. And I think about myself and my wife as parents now to two Asian American baby boys, growing up here in New Jersey, and what we want to provide them.”

“So, what I’ll just say right now is, this is personal to a lot of us.”

He meant the Asian American community. He could have easily meant the Zoom call.

Kim was speaking on a webinar discussing the recent rise in bias crimes, particularly those against the Asian community.

Grewal admitted the incidents of hate are personal for him, too.

“We talk about Atlanta, but when I see a 65-year-old woman walking to church on the street in New York City attacked — with no one doing anything — that breaks my heart,” he said. “It can’t continue.

“So, I’m glad we’re having this conversation. This is a groundswell like no other in my lifetime. And I know I speak for a lot of people on this call, because this is something that I have experienced. It’s personal.”

“I was thinking about the first time I was told to go back home,” he said. “My first memory of when I was told to leave this country.

“I was about 6 or 7 years old. I was in 1979, during the Iranian hostage crisis. People thought we were Iranian. We were told to go back home, and our car was vandalized.”

Grewal said he works each day to try to prevent his three daughters from experiencing something like this.

“We (must) do everything to make them feel welcome in this country,” he said. “So, they never have to hear those words, ‘Go back home.’ So, they can know that they’re welcome here, that they’re accepted here.

“That’s my goal. I’m going to use whatever tools that I have available in this role to make sure we don’t allow this to become normalized, that we hold bad actors accountable and then we do everything we can to create that accepting society that my daughters deserve, that Andy’s children deserve, that all of us deserve.”

It won’t be easy. Booker has seen it in the Black community. Seen how his parents marched decades ago in an effort to make change. Seen how the Asian American community faces it every day.

“I don’t know of an Asian American that I have real friendships with that won’t tell you about what it’s like to live with constant microaggressions — comments that are trying to undermine your feeling of connection and citizenship to this country,” he said. “Nobody’s asking our colleagues of European countries the same questions, or in the same way, that we see with Asian Americans in our country.

“That’s something we have to have a broader conversation with. So, as your senator, I’m working on all those levels, as well as just trying to be someone who is using my platforms and my voice to combat discrimination.”

Kim said it has to become a personal battle for everyone — not just the communities most impacted.

“This is personal to a lot of us, personal around the Asian American community trying to be heard and seen,” he said. “But it’s personal to all Americans. This is something where we all stand together in solidarity against this violence and this hate that plagues us.

“This cut is a deep wound in our country. And it’s going to require a lot for us to heal.”

A remedy will not be easy to find, Kim said.

“I don’t have all the answers, none of us on this call have all the answers, but that should not paralyze us from trying to do our best,” he said. “So, I’m just eager and excited to have an open conversation about this as we bring to the table a lot of just raw and honest emotions right now that we need to not stay away from, but rather channel into real action.”