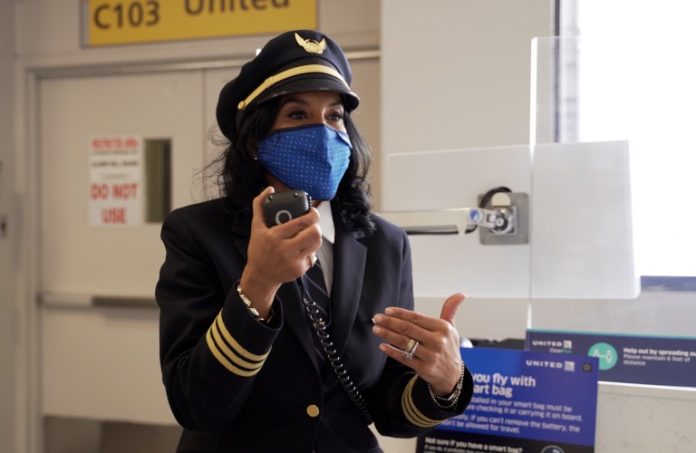 Carole Cary-Hopson was on a cross-Atlantic flight to Amsterdam, sometime in the mid-’90s. Back then, the years — and the flights — all run together, she said.

As an executive with the NFL and then Foot Locker, airline trips often were the commute to work. This flight, however, was different.

“The pilot noticed me looking around and observing everything,” she said. “So, he offered me the jump seat and proceeded to teach me everything on the North Atlantic trip.

“I was in the cockpit for the entire trip. Right before we landed, I returned to my seat and thought to myself, ‘I can do this.’

Little did she know then, her journey to becoming a full-time pilot for United Airlines — one that would take more than two decades — was just beginning.

Cary-Hopson remembers the dinner date with Michael Hopson, a man she went to high school with and had known for years. The details on this night are clear.

Both were in their 30s and were accomplished executives. They were talking about life and careers, when Hopson asked her, ‘What is your heart’s desire?’”

Cary-Hopson, now 56, picks up the story from there:

A short time later, they had another dinner date. This time, Hopson cooked. When they meal was over, he told Cary-Hopson that she needed to do the dishes.

“He said, ‘I cooked, you clean,’” she said. “And when I picked up my plate, there was an envelope with my name on it underneath it. Inside were gift certificates for 10 flight lessons.”

Cary-Hopson laughs when she tells the story.

“I’m sure he thought, ‘This should be enough,’” she said.

Cary-Hopson took the 10 flights and then did 10 more. She switched jobs to be closer to the Essex County Airport in Caldwell, where she continued to accumulate flight hours to get her private pilot’s license. In the spring of 2000, she left her job to train full-time and quickly earned enough hours to be certified to fly commercial flights, multiengine planes and be a certified flight instructor.

“The goal was to build enough flight time to go from being a flight instructor to a pilot on a regional airline,” she said. “That was the trajectory. At the time, I had about 400 flight hours and probably needed 400 more.”

And a new journey. She had her first son in 2003. Her second came a year later. She didn’t give up her love of flying — it just took a back seat for the next decade.

So, she continued to serve as a flight instructor and took a volunteer job with a simulator company.

“It was a great Mommy job,” she said. “I did that so that I could not only instruct, but be familiar with the crew environment. Sometimes, I would leave the house before my kids were up, but I was always home in the pickup line.”

By the time she turned 50, Cary-Hopson knew she had to make a choice.

In 2015, Cary-Hopson got a job with Jet Express, a regional airline that worked out of Newark. Three years later, she landed her dream job with United Airlines: She serves as a first officer on a Boeing 737.

United has reduced its number of daily flights, but Hopson still works full-time, which is 50-70 hours a month — flying anywhere from Canada to Costa Rica, with many locations in between.

But still, a goal remains. Cary-Hopson wants other women of color to have the same journey — to live the same dream, she said.

She wrote a book, “A Pair of Wings,” historical fiction based on the life of Bessie Coleman, the first African American woman and first Native American woman to earn a pilot’s license. It’s due out this year.

She also started the 100 Pairs of Wings Project, which aims to send 100 African American women to flight school by the year 2025. Their training will be in Mississippi, at the Luke Weathers Flight Academy — a school named after Weathers, a member of the Tuskegee Airmen during World War II.

“Less than 150 women of African descent fly for the regional, military, corporate, cargo or major airlines,” Cary-Hopson said. “We want to change this.”

Cary-Hopson said she’s known she wanted to fly since she was a little girl. Her goal is for other girls to not have to wait as long as she did. She wants to show them the way to their own journey.

“Those who fly are dreamers,” she said. “We believe in a quest, cherish hope, indulge in our passions and yearn for a pair of wings. But a dream without a plan is just a wish; only grit, hard work and tenacity, will convert dreams into accomplishment.

“I am living proof that it is never too late to follow your dream.”

Why suspending gas tax is bad idea — and some alternative...