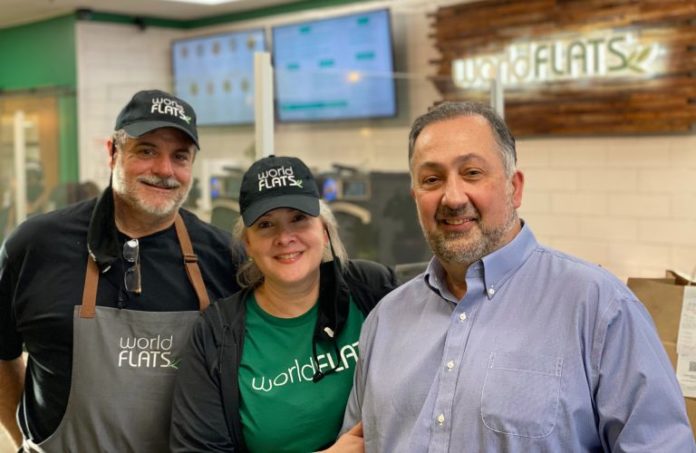 For Nvair Beylerian, the goal is simple: Achieve the ultimate in word-of-mouth marketing — and hear it just a few bites into a meal from WorldFLATS.

“We want the wife to say to the husband — halfway through the meal — ‘You know there’s no meat in this, right?’” she said.

It’s the not-so-secret part of the recipes at WorldFLATS, which opened its first location in Paramus in mid-March. And it’s why, when the store had its ribbon-cutting, Beylerian did not announce that WorldFLATS was a vegetarian restaurant, a vegan restaurant — or even an Armenian restaurant.

“We just want to be known as having good, wholesome, fresh food,” she said.

WorldFLATS, co-founded by Beylerian and her husband, Zareh Beylerian, is a grab-and-go fast-casual restaurant specializing in their unique version of Lahmajun, a traditional flatbread meal of Armenia that many call “Armenian pizza.”

The Beylerians feel they have taken the centuries-old dish and put their own unique spin on it. No more meat — lots more flavors.

Along with Executive Chef Luigi Tripodi, they have created nine original recipes — each with its own protein spread and toppings.

All bring the distinctive flavors of a region, but none comes with meat.

“It’s not a secret that we’re vegetarian,” Nvair Beylerian said. “But, we’re not really pushing that as our agenda, so to speak.

“We just want to be known as having food that is good and satisfying — and doesn’t give you a stomachache.”

Some feel starting any business during a pandemic — let alone a restaurant — would be enough to give you agita. The Beylerians don’t feel that way.

Zareh Beylerian, a lawyer who has done years of work in franchising, especially with food establishments, said the idea has been percolating in their minds for years. For him, it’s really been since he came to the U.S. from Lebanon more than 40 years ago as a teenager.

“I’m an immigrant,” he said. “We always look at this as a land of opportunity. I thank my lucky stars that I’m here in this country every day. And, you know, when there’s an opportunity, you never let go of it. It’s always in the back of your mind.”

The Beylerians said the pandemic actually made it easier to open.

For starters, the forced isolation enabled them to spend all of their time on the business.

“There were no social distractions,” Nvair Beylerian said. “No extended family responsibilities, no community events, no church events — we could completely focus on this.”

And, while they hate to admit it, the impact COVID had on society made the location they acquired — a former Dunkin Donuts — available.

“We are sorry for everything that has happened to everyone,” Zareh Beylerian. “But, we have to admit, COVID brought us an opportunity.

“And we had done our homework, so we were ready to take advantage of it.”

Unbeknownst to them at the time, the preparation actually began four years ago, when the Beylerians decided to go vegetarian as a lifestyle choice.

Nvair Beylerian, whose family came to the U.S. from Armenia three generations ago, wanted to see if she could make a vegetarian version of her favorite meal. Friends and family soon told her she had a hit on her hands.

Beylerian, however, knew she needed some help.

Last fall, she went to the Rutgers Food Innovation Center in Bridgeton. There, working with food scientists, she was able to learn additional responsibilities. And, more importantly, learn a little bit about running a commercial kitchen.

She knew she still needed more.

While talking with sales rep for TurboChef and other equipment, they were honest with her: You need a professional behind the line, they said. They quickly introduced her to Tripodi, a longtime chef and restaurant expert who had been a victim of COVID-inspired layoffs just a few months before.

“They put us in touch with Luigi, and, by the end of that same day, we were on our back porch, completely connected,” Beylerian said.

“He took my basic flats and kicked them up another notch with the toppings, the punches of flavor and the presentation. He’s been amazing. He was just what we needed.”

And the best thing about him, Beylerian said, is that he isn’t a vegetarian.

“We needed a meat guy to make a product that other meat guys would eat,” she said.

It took the Beylerians just a few weeks to perfect the nine varieties. (There also are salads and soups to round out the menu.)

They needed to be flavorful and filling, Tripodi said.

“We couldn’t have people leaving here thinking, ‘I wish I had chicken,’” he said. “Now, we’ve got people leaving, saying, ‘That was incredibly good.’

The key, he said, is to use the freshest ingredients.

WorldFLATS gets deliveries of the flatbread from nearby Toufayan Bakeries in Ridgefield Park a few times a week. They are quickly covered with the protein spread — think of it as the pizza sauce — and stored in a large walk-in freezer in the back of the store.

They are pulled out as needed, covered with the proper combination of the more than two dozen available toppings, heated in the TurboChef and are ready to go.

Most of the employees are students or graduates of the culinary programs at Bergen County Academies, Passaic County Technical Institute or Eastwick College in Hackensack. It makes a difference.

“We have an extraordinary team here,” Beylerian said. “They really want to be here. They’re really enthusiastic. They’re learning a lot from Luigi.

“And, I’ll tell you something, they are going to grow with us.”

WorldFLATS opened on March 21. Zareh Beylerian was thinking about location No. 2 before then.

All involved said it’s important to get the first location running smoothly first — but there’s talk of opening five more in the next two years.

And, while the first location on Route 17 is great for branding — it’s in a spot where more than 100,000 cars pass by a day — the next location will be in a walkable town location.

The plan is to create a hub-and-spoke approach. The Paramus location — which came with a large back of the house — could service up 10 locations in the Bergen, Passaic, Hudson and Essex areas.

There’s talk of spots in Hackensack, Closter, Montclair — even Chatham, Summit, Morristown and Red Bank. It could also be a fit for college campuses, arenas or transportation hubs.

“Any place where people are looking for something new and something different,” Nvair Beylerian said.

“There already are too many Middle Eastern, hummus and vegan places,” Tripodi said. “We’re different. We’re the place you discover when you just can’t have another meal at Chipotle, Smashburger or Subway.”

“We’re on a mission to promote this type of sustainable eating,” she said. “And we want it to become just a matter-of-fact way of life, something you have on average day, not necessarily a specialty option.

“So, we are definitely not marketing ourselves as a vegetarian institution. After all, we don’t want to scare anyone away.”