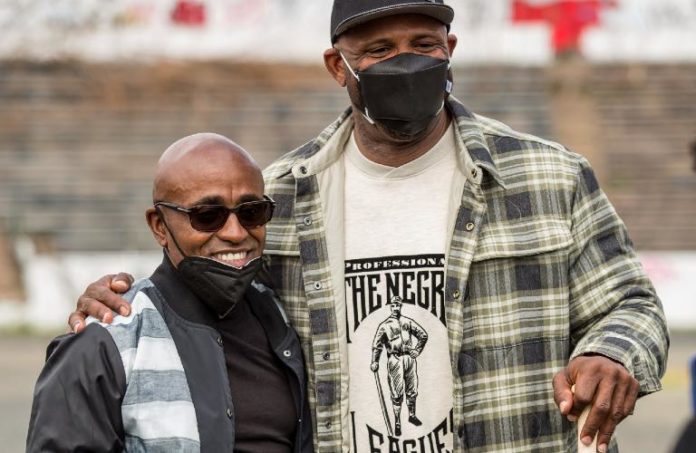 Wednesday in Paterson, real estate and city officials — and a handful of former big leaguers — held a ceremony to break ground on the $94 million project that will restore and enhance Hinchliffe Stadium, one of just two remaining stadium structures that hosted Negro League baseball games.

The project includes an already-completed mural of Larry Doby, the Paterson native who broke the color barrier in the American League in July 1947, three months after Robinson did so in the National League. Doby is in baseball’s Hall of Fame.

The groundbreaking marks the next chapter in the life of the local landmark, which will be fully realized when construction is completed in the fall of 2022. The project is Paterson’s most ambitious large-scale development in many years.

The initiative is highlighted by the complete redevelopment and modernization of the historic stadium, which will make the facility ADA-compliant and improve the field, restrooms, lighting, scoreboard and seating areas. In addition to the 7,800-seat athletic facility, the project also includes ground-up development of:

Adofo-Wilson, who serves as majority owner and lead developer of the stadium project, said he’s proud to undertake the project.

“Growing up in Paterson, Hinchliffe Stadium was a part of the fabric of the city — not just for the history it represented, but as the home of so many sporting and cultural events,” he said. “When the opportunity came to restore the ballpark after decades of neglect, we worked hard to craft a business plan that would make this project viable and help invigorate the neighborhood.

“With the assistance of both public and private funding partners, we were able to develop this comprehensive program for the ballpark and adjoining site, bringing sorely needed affordable housing, reviving the ballpark and creating a restaurant and other amenities that establish Hinchliffe as a destination for decades to come.”

Sayegh said the project is the largest catalytic investment in a generation.

“By taking one of our most dormant and underutilized sites, with deep historic significance, we are laying the foundation for citywide reinvestment and opportunity.  We are witnessing a once-in-a-lifetime transformation and I’m proud of our public-private partners who have helped usher in this complex project.”

Constructed in 1932, Hinchliffe Stadium was once home to the New York Black Yankees and New York Cubans in an era when many of baseball’s most talented players were barred from the sport’s biggest stage. Over the decades, the ballpark hosted a wide range of athletic and cultural events, including high school sports as well as motorcar racing, boxing tournaments and concerts.

The ballpark is most often associated with Doby, who played high school sports at Hinchliffe in the 1930s, and subsequently played in the park while in the Negro Leagues.

After decades of use, the ballpark fell into disrepair in the late 1990s, and has been largely neglected for the last two decades, opening the door for the redevelopment initiative being led by BAW Development and RPM Development Group.

Tim Sullivan, the CEO of the New Jersey Economic Development Authority, said the project impact goes past the fields and buildings.

“The Hinchliffe Stadium redevelopment will have a significant impact in Paterson and provide an economic boost for New Jersey as we begin our recovery from the COVID-19 pandemic,” he said. “In addition to paying homage to the achievements of Black baseball legends, this project will create jobs, provide much-needed affordable housing for seniors, and bring valuable community assets to Paterson.

“This groundbreaking honors this historic landmark and reminds us all that New Jersey values diversity and is committed to supporting and celebrating the greatness of people from all backgrounds.”

Baraka on Amazon chase: In my mind, we won months ago