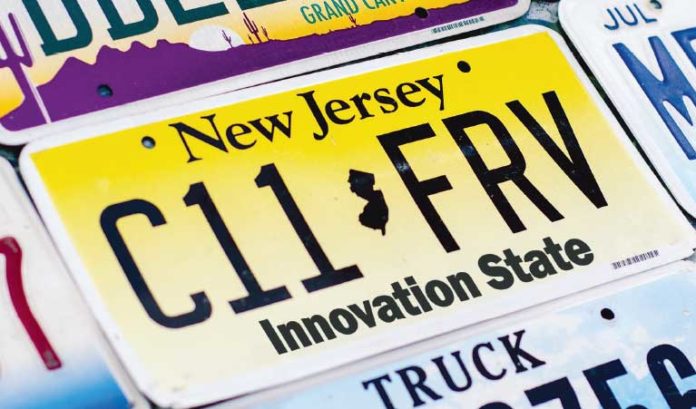 We are not the Land of Lincoln. Anyone who has ever played the License Plate Game on a long car trip knows that.

“Land of Lincoln” is proclaimed proudly at the bottom of every license plate from the state of Illinois.

New Jersey? We are the land of Einstein. And Edison. Not to mention Selman Waksman (who won a Nobel prize for his work with antibiotics), the Bell Labs team of Shockley, Bardeen and Brattain (who invented the transistor, the brain of modern electronics) and a host of others.

We are the land of inventors and innovation.

So why is it that we are the “Garden State” on our license plates?

Why aren’t we: “The Innovation State”?

As ROI-NJ releases its 2021 ROI Influencers: Tech list, we ran the idea by a few folks. Just to see what they would say. And to have a little fun.

Aaron Price was speechless. The CEO of TechUnited: NJ, the creator of Propelify, the designer of NJ Tech Meetup, the founder of several tech companies, struggled to find the words.

“That’s the best idea I’ve ever heard,” he said. “That would be amazing.

“That would be something that would recognize our past and our future.”

Jose Lozano, the CEO of Choose New Jersey, the organization charged with recruiting companies — often, tech companies — into the state, said he has pondered the question himself.

“I thought about that on one of my first days at Choose,” he said. “Something like that would help us tremendously. That is what we are pitching here. We are the home to more scientists per capita than any other state.

“We should embrace that. And market that.”

So, just why are we the Garden State?

According to the state’s own website, Abraham Browning of Camden is given credit for the nickname. While speaking at the Philadelphia Centennial exhibition on New Jersey Day — Aug. 24, 1876 — Browning supposedly said New Jersey is an immense barrel, filled with good things to eat and open at both ends, with Pennsylvanians grabbing from one end and New Yorkers from the other. The name stuck.

In 1954, the state Legislature passed a bill to have “Garden State” added to license plates. Before signing the bill into law, Gov. Robert Meyner investigated the origins of the nickname and found “no official recognition of the slogan ‘Garden State’ as an identification of the state of New Jersey.”

Even more, he said, “I do not believe that the average citizen of New Jersey regards his state as more peculiarly identifiable with gardening or farming than any of its other industries or occupations.”

Meyner vetoed the bill, but the Legislature overrode the veto. The slogan was added to license plates soon after. And has stayed on every standard-issue plate since — with commemorative plates being the only exception.

The License Plate Game shows the difference among the states.

Some states salute their history: New Hampshire (“Live Free or Die”), Massachusetts (“The Spirit of America”) and Delaware (“The First State”).

Others display their environment: Florida (“The Sunshine State”) and Alaska (“The Last Frontier”) or their incredible geography: Arizona (“Grand Canyon State”) and Minnesota (“10,000 Lakes”).

Three are just after a feeling: New Mexico (“Land of Enchantment”), West Virginia (“Wild, Wonderful”) and Virginia (“Virginia is for Lovers”).

Two are battling for supremacy in the air: North Carolina (“First in Flight”) and Ohio (“Birthplace of Aviation”).

One is angry: Washington, D.C. (“End Taxation Without Representation”).

And a few are just plain lame, printing only the county where the plate was issued: Tennessee, Georgia, Kentucky and Iowa.

This much is clear: It’s OK to change your plate. How else could you explain the presence of URLs: Pennsylvania (“VisitPa.com”) and Oklahoma (“TravelOk.com”).

“The Garden State moniker provides historical context and imagery of our beautiful state,” she said. “Today, we are proud of our strong farmland preservation program, a new generation leading our farming community, the assignment of Sen. Cory Booker to serve as chair of the U.S. Subcommittee on Food and Nutrition, Specialty Crops, Organics and Research and new horizons for cannabis and hemp crops.

“Clearly, we need to keep the Garden in our state.”

Good arguments all. And she didn’t even mention the Rutgers Food Innovation Center or the incredible amount of food companies that dot the state — many of which salute New Jersey, such as Jersey Mike’s and Hoboken Farms. Just Monday, Freshly announced it is bringing a food distribution center (and 340 jobs) to the state.

But, we couldn’t give her the last word. For that, we went to someone who is a scientist (he’s got the smarts), an academic (he’s got the theories) and an elected official (he’s got experience taking both sides of an issue): Assemblyman, Princeton professor and all-around good guy Andrew Zwicker.

So, what say you?

“Let’s make it, ‘The Garden State: Where ideas come to grow,’” Zwicker said.

Hard to argue with that … or make it fit on the bottom of a license plate.