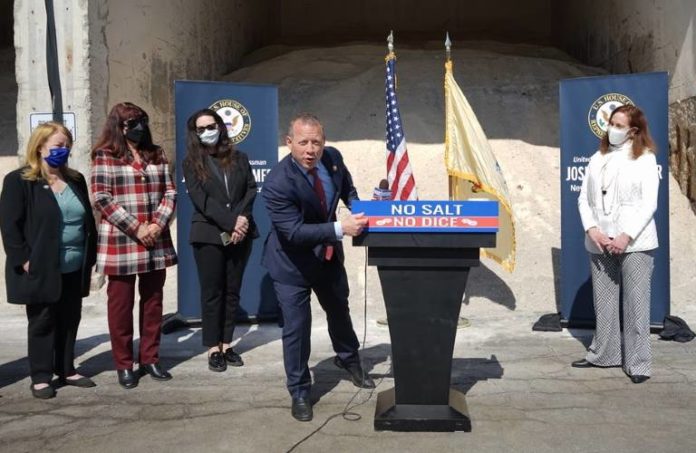 Tom Bracken brought an interesting take to the SALT cap discussion — an aspect many people overlook, he said. Bracken talked about its impact on retirees. The retirees of the future.

The SALT deduction impacts the value of real estate in the state of New Jersey,” he said. “And, although we may be getting a bump right now, because of the pandemic, when that goes away, the SALT reduction will continue to be a drag on values.

“The importance of that is that many people around the country and in New Jersey rely on the value of the equity in their real estate for retirement. Without that value and equity, they get hurt dramatically. So, we want to make sure that it actually leaves them so their retirements are healthy, and they have a better economic life going forward. This is a very vital part of this.”

It was just one part of the discussion Monday morning in Ridgewood. But it showed the long-term impact on a short-term game of political chicken.

Standing, symbolically, before a large pile of road salt, U.S. Rep. Josh Gottheimer (D-5th Dist.) talked about his fight to get the SALT (which stands for “state and local taxes”) limit of $10,000 lifted.

The cap, which was signed into law during the tax cut by former President Donald Trump, has been killing his area, Gottheimer said. Local taxes in counties he represents (mainly Bergen and Passaic, but also Sussex and Warren) average $15,000.

Some have suggested Democrats in blue states that have been crushed by the cap (New Jersey, New York and California) withhold their support for President Joe Biden’s $2 trillion infrastructure bill — which is about a lot more than just infrastructure.

Gottheimer said there’s a way to have both — an elimination of the cap plus the bill — and get them without raising taxes. Gottheimer fell back on the standby idea of “closing tax loopholes.”

“According to the IRS Commissioner (Charles Rettig) and, as former Treasury Secretary Larry Summers has outlined, every year there’s a trillion dollars in taxes owed that are not paid to the federal government,” he said. “It’s what we call the tax gap, which has surged over the past decade.

“Tax cheats — both people and global conglomerates — are able to get away with abusing the tax loopholes or utilizing foreign tax havens in places like Bermuda and Luxembourg to shift their profits overseas, even though they do business in the United States.”

It sounds like a great idea. But don’t count on it happening. There’s a reason there are so many loopholes. They often are placed inside bill packages as the only way to ensure votes. Gottheimer is not the first to suggest closing them up.

Do you think Congress is just now noticing they are a trillion dollars short in the bank?

Many in Jersey blamed Trump for the SALT cap. They said it was a vendetta against the blue states that didn’t vote for him. New Jersey voted overwhelmingly for Biden — and he already announced he’s not interested in rescinding it.

This may come down to whether Democrats here and in the other key states are willing to stare down the infrastructure bill — packed with so many things we need today — for the retirement savings of the future.

The infrastructure bill seems like a better bet. History always has favored the idea that kicks the can down the road.

On MLK Day, here’s the state of our state (for Black businesses)

Grassi promotes 7 principals to partner, including 1 in N.J.

Walsh to succeed Hagaman as CEO of Withum in 2023

Real Estate
Linda Lindner -
January 17, 2022
She's worked on projects such as the Times Square Tower, Somerset Corporate Center and the redevelopment of the retail concourse at Rockefeller Center, and...

Op-Ed
Dr. Hamid Shaaban, Saint Michael’s Medical Center -
January 17, 2022
“We are all caught in an inescapable network of mutuality, tied in a single garment of destiny. And what affects one directly affects all...