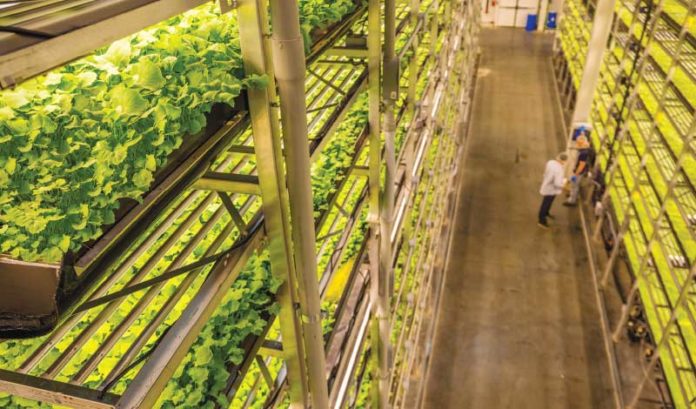 AeroFarms was thrilled to announce Friday that it will be expanding its global headquarters in Newark, building out an additional 25,000 square feet of space for both offices and a center for research and development.

It’s a confirmation of the company’s decision to move to Newark in 2015. And, as co-founder Marc Oshima likes to point out, Friday’s announcement isn’t the first indication of what he calls a great working relationship with the city.

“We actually have four different locations in Newark,” he said. “We have our headquarters and an R&D farm in downtown Newark and then we have two facilities in the Ironbound section.

“What we’re doing today will help us accommodate the growth that’s coming to the company. It’s really a remarkable time period for us.”

Oshima, who serves as the chief marketing officer, told ROI-NJ the company will be looking to expand its workforce in Newark — which currently stands at approximately 150, or twice what it was in 2015.

“We’re definitely looking to expand,” he said. “You can go on our website and see 10-15 jobs that already are available, and there will be more.”

The company, which announced earlier this month that it is going public through a SPAC, is the leading indoor vertical farming group in the world. Last spring, it announced plans to build a facility in Abu Dhabi. And the company is looking at additional sites, too, Oshima said.

Friday, however, was about AeroFarms’ commitment to Newark, Oshima said. It will start with more office space — as soon as Friday, he said — and will continue with more R&D capabilities.

“This is a great example of public-private partnerships,” he said. “We work closely with the city of Newark with Mayor (Ras) Baraka — and worked closely with Mayor (Cory) Booker before that.

“This expansion is closely aligned in terms of, how do we help transform the city? How do we provide meaningful jobs and year-round employment? How do we have an impact in addressing food deserts?”

And then, there’s the impact with the next generation, Oshima said.

“We’ve had a working farm at the Phillips Academy Charter School in Newark for more than 10 years now,” he said. “So, there’s a lot of different touch points for us here. Newark has been a great home for us.”

“New Jersey and Newark have been the perfect home for AeroFarms to recruit the best talent for horticulture, engineering, data science, operations and food safety, enabling us to reimagine agriculture in the Garden State,” he said.

“We are scaling farms around the world, partnering closely with major multinational retailers, and our newly expanded global headquarters will be a showcase for our transformative work and innovation that will further drive our mission to grow the best plants possible for the betterment of humanity.”

Free QuickChek coffee for a year: One drinker at every store...