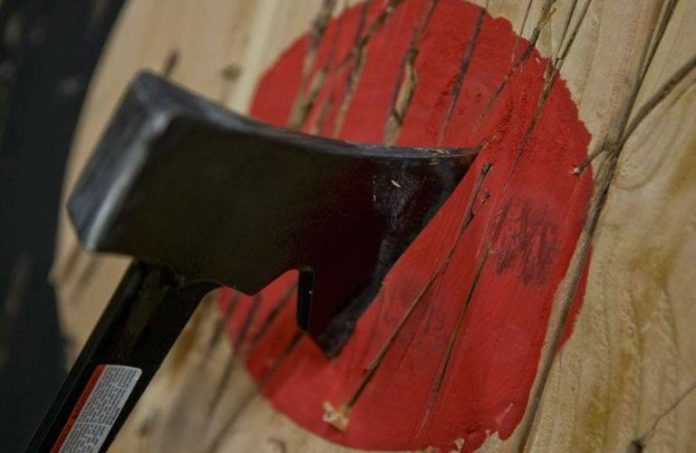 In the wake of Superstorm Sandy, Stuart and Kelly Josberger and another couple found a tree toppled that made a perfect target to toss axes at in a backyard. They had fun enough to want to originate locally the concept of the indoor hatchet-throwing business.

The fallout of the COVID-19 crisis, on the other hand, hasn’t lent itself to inspiring founders’ stories.

But it also hasn’t been their undoing. Stuart Josberger, an owner of Stumpy’s Hatchet House alongside his wife and the couple they initially chucked axes with, Mark and Trish Oliphant, said the business they started in Eatontown has built strong roots in the Garden State and elsewhere.

They’ll be first to admit: The once-reliable business they once aimed for — birthdays, corporate gatherings, bachelor parties — it’s all missing. They’re getting groups of two, four — sometimes, six. The 15- or 20-person money-making events haven’t existed for at least a year.

This time last year, Josberger said his company’s nationwide ax-tossing franchises were forced to go without business for several months as states tried to cut down on COVID-19’s spread. That was followed by tepid reopening plans franchisewide around August of last year.

“Typically, the fall and winter are our busiest times of the year, particularly in the Northeast,” he said, adding that wasn’t the case last season, as consumer activity crawled back from shutdowns.

Regardless, Josberger said he’s seeing some clear indications that people are missing some of what he calls “hatchet therapy” now. At the start of the year, Stumpy’s had an 11% increase in business across its system. And Josberger expected growth to continue in 2021.

“So, it has been slower than we would’ve liked and not as robust as in the past,” he said. “But, every day, it gets better. With news of the vaccine, and perhaps some people being sick of being housebound, we’ve seen a significant increase in business.”

The pandemic flew at them just as the indoor hatchet-throwing concept was enjoying attention as a new trend among local entertainment establishments.

Stumpy’s, of course, had been doing it for about four years prior. The business launched its flagship Eatontown location in April 2016, becoming the first of its sort in the country.

“We very quickly had a lot of people asking to be part of owning for themselves the fun, indoor recreational activity of hatchet throwing,” Josberger said. “We’re BYOB. So, a lot of times, we said: ‘You’ve had a couple beers. Give us a call in the morning.’”

Sure enough, maybe after the hangover, they did call.

With what Josberger admits was only a semi-proven business model, the company began franchising the year following its launch. Today, it has sold 38 franchises across the country. About 30 are currently operational, including six in New Jersey.

Even during the pandemic, the calls are coming in. Josberger said Stumpy’s just sold a franchise at the start of March.

Just as its franchise network has grown, so has its ax-wielding competition.

“Right after we opened, a one-off opened up in South Philadelphia and then, subsequently, the two big Canadian companies came across the border,” he said. “Since then, there’s been one-offs as well as regional players that have followed the same trend. The last time I looked, there was close to 300 ax-throwing places nationwide.”

As happy as Josberger was to report that the business hasn’t had to close any locations during the pandemic, he said he’s heard of indoor hatchet-throwing businesses not surviving.

A business like Stumpy’s does have some social distancing built into the system, as the lanes aren’t set up along the wall side-by-side like a bowling alley, but instead have “pits” opposing one another. However, they still have to operate at limited capacity based on the rules of various states. In New Jersey, the cap for these venues is 35%.

And the comfort levels of those that would try their hand at hurling sharpened tools isn’t what it was before the pandemic, even if the business has invested a lot in trying to make customers feel comfortable with cleaning and sanitizing in facilities.

Any way you slice it, it’s a difficult time to be an experiential retail business.

“We had to do a combination of keeping franchisees motivated and in a good headspace and also communicating with them about resources available to them,” Josberger said. “Besides applying for (the Paycheck Protection Program), some were able to negotiate with landlords for reduced rents — others weren’t able to achieve that, but most received some abatement.”

Josberger hopes the worst is behind his fellow hatchet throwers (not that it would be wise to stand in front of them).

“People are itching to get out and do something,” he said, “so I believe the return of business is coming soon.”

Murphy spokesperson: N.J. has no plans to follow Pa.’s lead and...