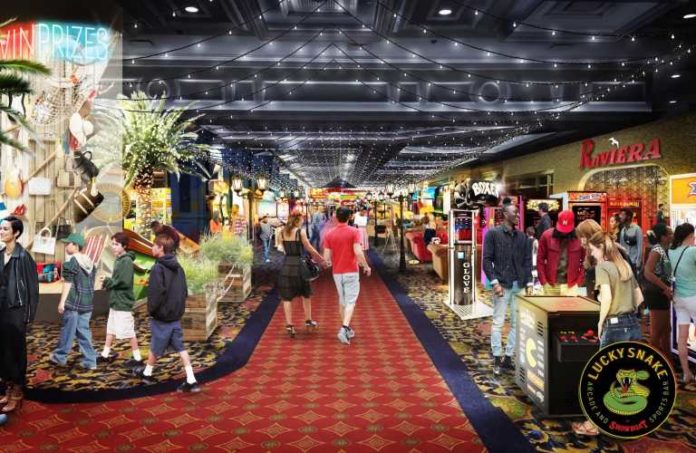 A 100,000-square-foot arcade, the largest in the state, will open May 15 at the Showboat Hotel in Atlantic City as part of a greater effort to bring noncasino entertainment to the resort city, developer Bart Blatstein announced.

Blatstein, the CEO of Tower Investments Inc., is planning multiple entertainment concepts under one roof at the Showboat. A sports bar with a boxing ring, indoor venues for live entertainment, a speakeasy and improved convention and meeting spaces also are set to come, he said.

Blatstein received approval for the license last week. Showboat, located at 801 Boardwalk, is the largest noncasino hotel in New Jersey.

“This is a very exciting time for us,” he said. “We at Tower Investments are extremely proud of this hotel and are thrilled to further expand on its offerings for guests of all ages, especially families.

“It has always been our mission to deliver an unforgettable experience for our guests, and we are delighted to bring a family-friendly and year-round resort option to Atlantic City.”

The arcade’s games will include the world’s largest crane game, rising from floor to ceiling, in addition to the classics from the ’80s through today and the hottest new titles and virtual reality games, as well as basketball games, pinball, Skee-Ball and more, Blatstein said.

Blatstein said the arcade will offer some of the best redemption prizes around, including everything from candy to designer purses and jewelry, cars and motorcycles, and even all-inclusive vacations. He said the arcade’s reward program will be comparable to the most advanced and favored customer loyalty programs in the casino industry.

Packages offering guests unlimited game play or game play with food and beverage will be available.

The 25,000-square-foot sports bar will include an e-sports gaming area, as well as a 20-by-20-foot boxing ring. Live entertainment will be programmed seven days a week at the indoor entertainment venues, which will host areas for music performances and street performers.

The speakeasy concept will be the only one of its kind in Atlantic City and will feature the famous Riviera sign that was once a staple on the Las Vegas Strip.

McDonald’s has over 4,000 open positions at restaurants across South Jersey