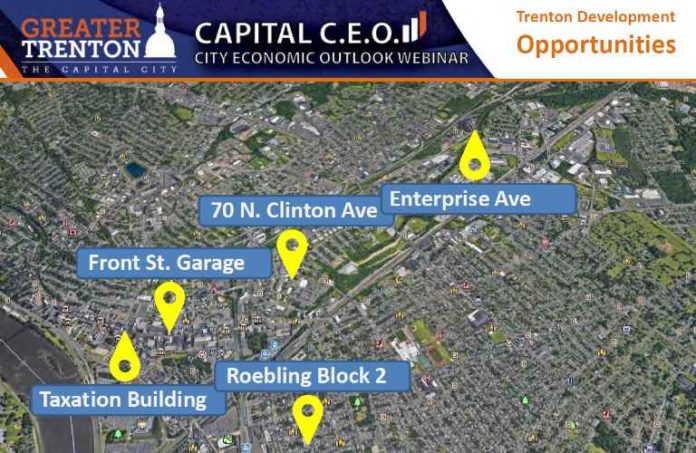 There’s the Front Street Garage site, which sits on 0.84 acres in downtown Trenton, across from a park, in an Opportunity Zone ZIP code and seemingly perfect for a mixed-use project … the Roebling site, a more than 6-acre site within walking distance to transit and set up perfectly for office … and the Enterprise Avenue site, more than 13 acres of vacant land that seemingly would be perfect for industrial use.

It’s nice to talk about how aspects of the New Jersey Economic Recovery Act of 2020 set up nicely for urban centers such as Trenton — and how, in fact, there are so many aspects of Trenton that were in mind when the legislation was produced.

It’s quite another thing to show specific spots of city-owned land where developers could put these programs in play.

That was one of the biggest takeaways of Capital C.E.O., the City Economic Outlook webinar that was put on by Greater Trenton last week.

George Sowa, the CEO of Greater Trenton, said his organization has made increasing awareness a top priority. He hopes the presentation did that.

“We wanted to present a cross-section of properties that are publicly owned and which offer diversity of use, location and size for consideration by a wide spectrum of developers, brokers and other interested parties,” he said. “ These properties, and the associated benefits associated with each, are representative of the benefits that could be obtained for other properties throughout Trenton that have similar attributes and characteristics.”

The three properties were among five that were presented in the hourlong program. But they illustrate how — in a state where developers are hard-pressed to find space — there is plenty in Trenton.

Tim Sullivan, the CEO of the New Jersey Economic Development Authority, said he is doing his part to help developers understand the benefits of Trenton.

Sullivan, who gave the keynote, spoke about how the Economic Recovery Act had Trenton (as well as Paterson and Atlantic City) in mind.

“All the dials are turned up as strongly as they could be within the parameters of the bill to make sure that Trenton benefits from this package in a way that perhaps it didn’t from prior approaches to incentives as much as it could have or should have,” he said.

Sullivan talked about how Emerge and Aspire programs can be used in the city, and that the net benefit test for Trenton in Emerge is just 200% — as opposed to the 400% it is elsewhere.

Sullivan said the goal would be for a company few have heard of today to take a stack in Trenton, where it could grow into its world headquarters.

But where? This is where Greater Trenton came in. It gave a quick overview of five sites — and did so while indicating there are plenty more.

0.756 acres of land; proposed residential use

0.48 acres of land; proposed office use

Greater Trenton officials stressed that these properties, all city owned, are just some of the parcels available.

Sullivan said the EDA is ready to help interested developers/companies in these locations or any other around the city. That, he said, is the goal of the Economic Recovery Act.

“I think that the bill is a very real and a very tangible demonstration of Gov. (Phil) Murphy’s commitment to Trenton,” Sullivan said. “He is committed to our capital city.”