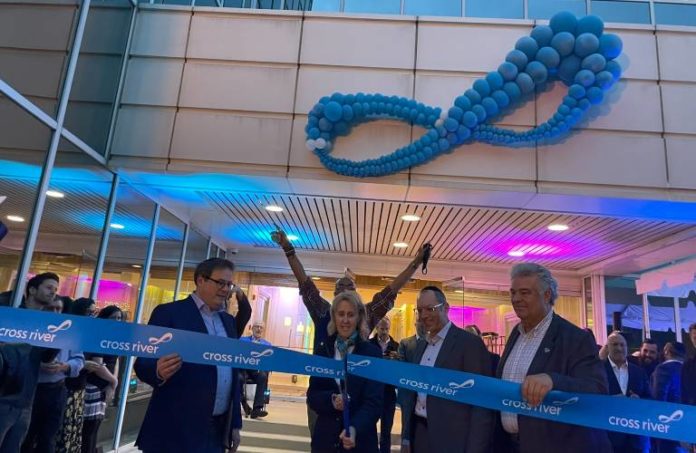 Gilles Gade, founder, chairman and CEO of Cross River, is not afraid to be bold about his company — or its place in the fintech industry.

“There is one address in the fintech industry, and that is Cross River,” he said.

Gade, speaking Thursday night at the grand opening of the company’s new headquarters in Fort Lee, highlighted the company’s growth — and its commitment to New Jersey.

The company, which was awarded a Grow New Jersey incentive to help purchase a new 70,000-square-foot building in Fort Lee, has hired more than 400 team members, nearly doubling its workforce in New Jersey, since the deal was announced in 2019. Gade said the company intends to hire at least 100 more.

“Our new headquarters is emblematic of our growth here in New Jersey, but, more importantly, plants the seed of the future for Cross River,” he said. “We thank Gov. (Phil) Murphy and the (Economic Development Authority) for their support, and we’re thrilled to celebrate this momentous occasion with the entire Cross River family, together with our community partners and neighbors who have been right beside us from the very beginning.”

Murphy was more than happy to send the well wishes back to Gade and Cross River.

The technology-focused financial services and Banking-as-a-Service organization represents the type of company Murphy wants to build his vision of an innovation economy around.

“We are immensely proud that, in calling New Jersey home, Cross River has recognized the wealth of advantages our state has to offer, including one of the most diverse and educated workforces in the country,” he said.

“Cross River and companies like them are exactly the type of innovative firms that will help bring our state once again to the forefront of the innovation economy.”

Cross River describes itself as a company that merges the forward-thinking offerings of a technology company with the established expertise of a bank, while maintaining a strong focus on regulatory compliance and consumer protection.

As a New Jersey state-chartered community bank, Cross River has demonstrated firsthand how the state’s structure and support has played an integral role in propelling economic advancement, innovation and increased investment opportunities, its officials said.

Tim Sullivan, the CEO of the NJEDA, said Cross River’s role in building the state is key.

“In addition to creating hundreds of new jobs, Cross River is committed to helping entrepreneurs overcome challenges by improving access to capital and offering educational resources that help to prepare them for future opportunities,” he said.

Cross River feels it is at the forefront of both banking and technology, powering some of the most successful companies, like Affirm, Coinbase, Rocket Loans, Stripe and Upstart. Having opened its doors in Teaneck in June 2008 with the primary goal of providing access to responsible credit products for businesses and consumers in need, Cross River has flourished in the state as a result of its public-private collaboration and the support of the local legislators and organizations such as the EDA, Choose New Jersey, the New Jersey-Israel Commission and the New Jersey Bankers Association.

“The talent in New Jersey and the region has been one of the key ingredients to our success and growth as a leading fintech company,” David Nachbar, global head of people at Cross River said. “We have the best and the brightest people, the vast majority of whom live close by, right here in New Jersey.”

Fort Lee Mayor Mark Sokolich is happy to have them.

“Cross River represents the true spirit of the state of New Jersey — innovative, forward-thinking and hyper-community focused,” he said. “Fort Lee is incredibly excited to continue to be the home for Cross River, and we look forward to the company’s continued growth and success here.”

Millburn-based based Kason acquired by May River Capital