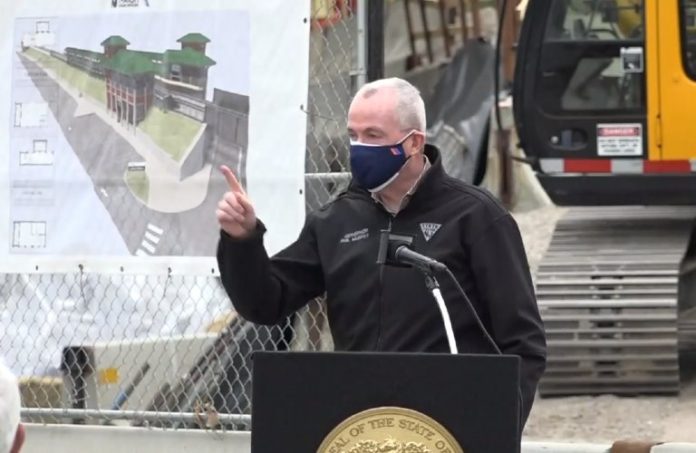 Gov. Phil Murphy and a host of other state and local officials broke ground on a new $30.9 million train station in Lyndhurst on Friday morning.

The money for construction comes from an award from the Federal Transit Administration.

The new stop, which will replace a 107-year-old station, will be located at the intersection of Delafield and Court avenues, a more convenient location that is closer to the commuter parking lot. The new station also will be ADA-compliant.

The station, located on the Main Line, pre-COVID-19 served an average of approximately 1,000 weekday passenger trips.

“When this station is completed, residents of Lyndhurst and the surrounding area will have a brand-new, ADA-accessible facility that will benefit them for generations to come,” Murphy said. “Our public transit infrastructure is a priority, and we will continue to invest in it and modernize mass transit across New Jersey.”

“The new Lyndhurst station, a vital link in our Bergen County Rail network, will retain the best design elements of its 107-year-old predecessor while meeting modern standards and greatly improving access for all customers,” she said. “With this facility upgrade and other improvements throughout our system, NJ Transit will be poised to serve commuters for decades to come.”

The station building is designed to replicate the historic style of the Lyndhurst neighborhood and will include ADA-accessible platforms, new stairs, four elevators, lighting, canopies, communications and closed-circuit TV.

NJ Transit’s board of directors approved a construction contract for $18.5 million for the project last year. Six firms bid on the project, with the contract going to Anselmi & Decicco Inc. of Maplewood.

The ADA-accessible parking lot will be located next to the new station on the property owned by the township, under a lease agreement between the township and NJ Transit.

Lyndhurst Mayor Robert Giangeruso said the new station will be a huge plus for the town.

“With the township of Lyndhurst obtaining a new world-class train station to benefit our residents and ease commuting to Manhattan and other metropolitan areas, I am thrilled that our longstanding efforts and lobbying with NJ Transit have come to fruition,” he said.

“This new train station is critical in building smart growth infrastructure and is key to ensuring a prosperous future for Lyndhurst, while also enhancing the quality of life of our residents.”

NFI expands offerings in the e-commerce space with the launch of...