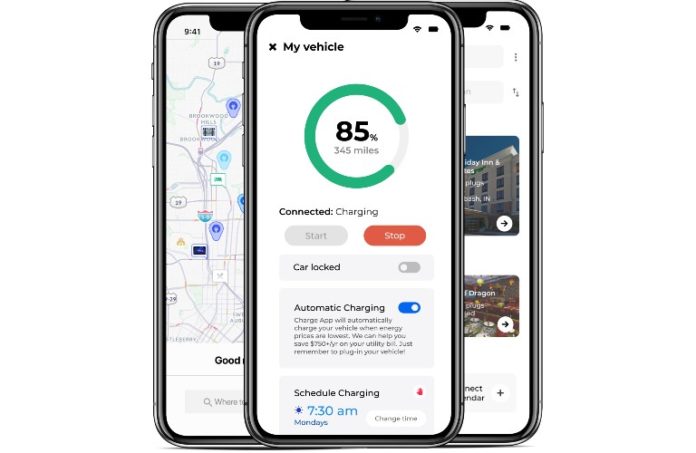 Mohammed Elmzaghi was at the Center for Intelligent Networked Systems at Stevens Institute of Technology — a place the school created to provide a foundation for developing advanced research topics in the broad area of networks enhanced by the addition of embedded intelligence — when he had a revelation.

Elmzaghi feels Tesla’s early dominance in the electric vehicle market cannot last forever, but its likely current competitors — the Fords, Nissans, Chevys, Volkswagens and others, he said — are not necessarily ready to take advantage of their opportunity.

The reason: Tesla vehicles come ready-made with optimized charging technologies that are geosynced and frequently updated in real time. Auto manufacturers that exist chiefly to build gas-powered vehicles are well behind, Elmzaghi said.

“None of them have solved this software challenge like Tesla has,” he said. “Tesla is on a kind of island. Owners of these other vehicles still need to download something like nine different apps to travel; one for trip planning, one for finding charging stations, one to connect the vehicle, one to interact with charging stations and so forth.

“I decided to fix the user experience by building an all-in-one product.”

It led Elmzaghi — a senior majoring in computer engineering who will graduate later this month — to found Bauen Energy Technologies and developed a new Apple-platform application, Bauen Charge App, that enables hybrid and electric vehicle owners to automatically recharge their cars both at home and on the road.

Several hundred users have already downloaded the app, which recently added a premium subscription service that further optimizes vehicle charging. The process, Elmzaghi said, has been both exhilarating and nerve-wracking.

“It feels good to ship a product you once had as an idea, but it’s also scary, because you need to be solving a real problem and providing real value to lots of customers or your work will quickly disappear,” he said. “Nobody wants to ship an app that nobody will use. So, the rollout process has been exciting as well as stressful.”

The Bauen Charge App taps into an EV’s native systems, monitoring battery status and beginning control charging when needed, while also accessing maps of roadways, charging stations and even gas stations for hybrid vehicles. (The app is currently only available for iOS devices, via the Apple Store; an Android version may be developed later.)

Crucially, the app brings EV owners the ability to wirelessly schedule charging when energy prices are lowest — important in an era of dynamic pricing models that can charge significantly higher rates at night, after working hours, he said.

In addition to the obvious cost savings, Elmzaghi recognizes his application could also help bring more demand to EVs, which will benefit efforts to cut carbon emissions and slow global climate change.

“Every day, we come across more research about how big this climate change problem is,” he said. “The actions we are taking as a society, and globally, are simply not enough yet to slow the momentum of climate change, and it is deeply concerning.”

As he moves forward, Elmzaghi said he knows he will eventually need to raise capital, market the service and build a community. For now, however, he remains focused on further developing the app, working, for example, to better connect the service with existing charging network locators and payment systems such as Blink Mobile and SemaConnect.

“I think of myself more so as a designer than a programmer or coder,” he said. “I think of this as a design problem. I am building a simple, easy-to-use interface and experience to solve a big societal problem.”

Elmzaghi, a Hudson County native who was first introduced to Stevens during a pre-college program, said he was grateful for the guidance Stevens provided during his time as an undergrad.

As a freshman, he worked in the robotics research laboratory of electrical and computer engineering professor Yi Guo. Later, he spent a year in the university’s Launchpad program, learning about entrepreneurship from professor Mukund Iyengar.

At the Center for Intelligent Networked Systems, he worked with Director Victor Lawrence and Deputy Director Dan Udovic.

“When I first arrived, I wondered if I would find people who have built startups and impacted people in big, positive ways,” Elmzaghi said. “That is always difficult for any undergraduate student at any university. Meeting professor Lawrence was amazing: He has done so much in technology and commercialization in his lifetime.

“He made Stevens better for me, as a student trying to start a company. He has been a huge influence helping me to grow, learn more about our faculty and making connections with Stevens researchers.”

They gave him the confidence to help him help others take on Tesla.

“Tesla controls more than 75% of the EV market in the U.S. right now,” he said. “But that dominance can’t continue.”