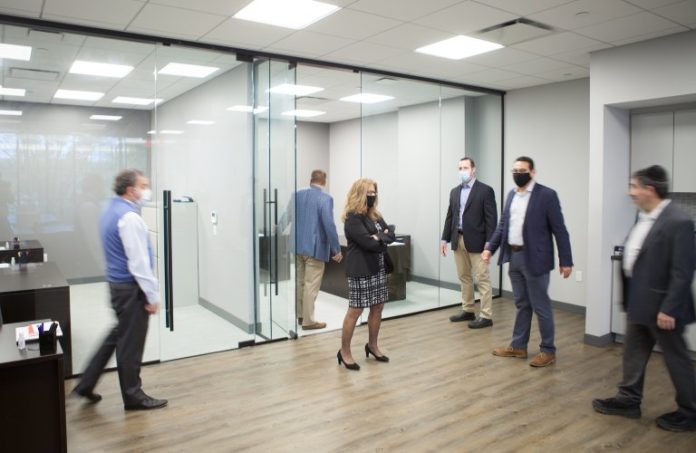 Meryl Gonchar admits it: Not having a daily commute to Newark — something that could take an hour or more one way on a good day from her house in East Brunswick — is nice.

And Gonchar acknowledges that she and her fellow lawyers at Sills Cummis & Gross P.C. have learned what so many others have discovered during the pandemic: You can be productive working from home.

“It was surprising to me,” she said. “I have learned how efficient I can be at home — mainly thanks to the fact I didn’t have the hour commute.”

It is not a perfect scenario, however. Gonchar said she doesn’t miss the commute, but she misses the interaction.

Others feel the same way. Including Max Crane, the firm’s managing partner. That’s why Sills Cummis is now offering a third option: A satellite office at Bell Works in Holmdel that can be used … as needed.

Crane said the firm, which is headquartered in Newark and has an office in New York, was discussing alternate work arrangements before the pandemic hit New Jersey 15 months ago. Now, as the state emerges from the pandemic, Crane is introducing a hub-and-spoke alignment he feels is the best workplace model for the future.

On June 1, the firm will officially open the workspace, an approximately 4,000-square-foot office that 8-10 Sills employees will make their primary office.

The office, Crane said, will help with attraction and retention of both lawyers and clients. When members of either group actually go to an office, that is. It’s part of the new normal at Sills.

“It’s the third option that I think everyone is looking for,” he said. “It’s a way of easing people back into the workplace at a time when no one is sure what they really want yet.

“We’ve all been productive at home, but many people say they want to return to work, return to the collegiality they find in the workplace. But people don’t want to drive into Newark or Manhattan every day or stay home every day.

“This gives them a way to get out of the house into a workspace.”

Ted Zangari, who chairs the firm’s real estate practice group and outside counsel group and sits on the firm’s management committee, where he is tasked with helping to envision the long-term future of the firm, said Sills already is looking at potential satellite offices in a few North Jersey suburbs.

“The idea is to create a crescent around the mothership that is Newark,” Zangari said. “We don’t have a timeline, but we do have this in mind for the future.”

The first step, Zangari said, is establishing the Bell Works location as a legitimate office. More, Zangari said, than just something that could be confused for a WeWork or Regis location.

“It can’t just be a sterile, nondescript space where you have phone lines and a white board,” Zangari said. “Maybe that works in other professions, but not in the practice of law, where you need collaboration.

“We take pride in having our name on the door. Opening up a small satellite in a facility that’s not your own doesn’t accomplish the purpose, because you’re still feeling as though you’re not connected to your colleagues. It doesn’t have the same vibe to it.”

Creating the atmosphere will be key. Zangari said it may lead to a new term: co-locating.

“If we open a satellite office where we’ve got one tax attorney, one litigator and one real estate attorney, it will have collegiality, but not necessarily collaboration,” he said. “I think you’ll see us encouraging people from the same practice groups to go to a particular office on an appointed day.

“I think co-locating is going to be just as important as the satellite office itself, because, if you don’t engender some kind of a collaborative work environment, then it’s just giving employees a place to go to work outside the home — and you might as well just be in a nondescript office environment.”

“I hope we quickly outgrow the existing space at Bell Works,” he said. “Nothing would make me happier than to have this go over so well that we had to add space.”

And that could mean adding lawyers, too.

Sills currently has approximately 150 lawyers, about 125 of whom work out of — or used to work out of — the Newark office, a 70,000-square-foot location near Newark Penn Station.

Crane said he views the new setup as an ideal way to attract new talent.

“People know our firm, like our firm, want to work at our firm, but you would be surprised how many lawyers get close to the finish line with us in terms of joining, only to back away because they don’t want to make the commute to Newark or New York City,” he said.

“And this was before the pandemic, before everyone saw they could work effectively without being in an office every day. I can tell you, this has enhanced our recruiting already.”

“We’ve said to people, ‘We’re planting a flag here, we’re going to be here, this can be your primary place of employment and it will give you the opportunity to integrate with the principle number of lawyers in Newark and, at the same time, be closer to your home,’” he said.

Zangari said lawyers, like everyone else, are looking for a new work environment. He feels this hub-and-spoke approach provides it.

“This speaks to retention of talent,” he said. “We don’t know what the new work environment is going to be post-pandemic. But we know one thing, for sure: We’ve seen the future — and the alternative to commuting is not working from home every day of the week, it’s having something in-between.

“In our opinion, that something in-between is having a vibrant satellite office, where you can take meetings, where you can collaborate with colleagues.”

How often will employees go to these offices isn’t the point. Just having the option is, Zangari said.

“Psychologically, just knowing that you now have three choices will help,” he said. “If people end up spending five days a week still coming to the mothership, which could happen occasionally, knowing that they elected to be there is important. We’re offering options.”

Gonchar is happy to have flexibility.

As co-chair of the firm’s land use practice group, she often has meetings around the state — that meant leaving the Newark office midday to make nighttime meetings in Central Jersey.

“When you’ve got to be somewhere in southern Monmouth County at 7, and you’re not sure what you’re going to hit when you get to the Parkway, you need to leave Newark before rush hour — whenever that is,” she said.

“To have a full office support and be in a location where I can get to that part of the state at rush hour without having to leave two hours early, is a treat.”

Not that she’s abandoning Newark.

Crane, in fact, said the concept was too good to ignore any longer.

“We’re starting in a small way in one county, but, as we attract recruits, they will take part of the ownership of running and growing those new offices and help us build out the infrastructure in a more meaningful and more long-lasting way.

“It will be tied to quality lawyers, quality business clients and a kind of an integrative vision of how we grow the firm, with its principal office in Newark. It is complicated and as simple as that. We’ve thought about this for a long time. Now we have to execute it.”

Moving forward in Newark: It will be about wins, not losses