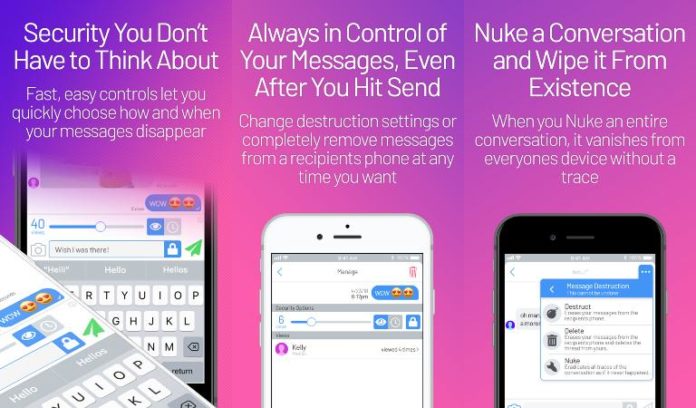 In New Brunswick, there’s a team of mostly Rutgers University alumni working on a cybersecurity and privacy-informed social media startup that has the potential to blow up.

That’s if the impending rollout and marketing campaign of DatChat proves Darin Myman, the endeavor’s co-founder and CEO, right. He believes people want their social media posts to have the capacity to self-destruct, and that’s what this local social media creation offers.

“What we wanted to do is put everyone in control of their information when they hit, ‘Send,’” he said. “Because, really, the biggest threat to your privacy is what happens when it’s out of your hands. It’s not always about just keeping intruders out, as most cybersecurity companies focus on.”

More than nuking internet correspondences, the entrepreneur — who also founded BigString in 2005, which allows people to self-destruct emails — thinks people are ready for a social media and messaging platform where privacy is emphasized.

Among other measures, the DatChat platform is capable of restricting an iPhone’s ability to take a screenshot of its social media content. Limitations can also be put on whether messages can be forwarded or shared. The content on the platform is also not archived, or used for advertising data.

“Basically, we believe in having the same privacy online as you do in your living room,” Myman said. “Most people talk to their friends differently than you do in the real world, whether it’s about sports or work or whatever it might be. You should be able to talk to friends in the way that you do without people jumping into your conversation.”

The team behind DatChat unveiled late last year a fully encrypted platform that’s based on a blockchain technology. Platforms such as Signal and Telegram have gained notoriety recently for doing something with encryption — all in reaction to the pushback platforms like Facebook have faced for their perceived lack of privacy for users.

Myman said no one has offered the exact suite of privacy features that are available on DatChat, which is centered around the ability to permanently delete posts or messages at a time of the user’s choosing.

“It’s really addressing two big questions: Are you able to speak freely with friends and not have outside forces come up in every conversation? Do you want to have your information laying out there forever?” he said. “And we believe people are just getting tired of having everything indexed, archived and saved.”

DatChat’s marketing also positions the social media platform as one free of censorship, or, as Myman puts it, “the prying eyes of self-appointed internet hall monitors.”

Newer social media platforms have also taken that lane — with the app Parler being a high-profile example. That app, which is known for its largely conservative user base, came under the microscope following the storming of the Capitol in January.

That extra scrutiny, and the app’s alleged role in broadcasting the violence of suspected rioters, led to Parler being temporarily kicked off iPhones and Android devices while it underwent a review for its content moderation policies.

That’s all unfolding right as a social media platform such as DatChat, which offers even more user control over content, is getting its start.

“But we think we’re outside of that,” Myman said. “We do have self-moderation tools and we’re developing client-side AI for moderation. But our focus is really on you talking to friends or people you know. It’s not something for broadcasting and finding people, like Facebook or Twitter. You know who you’re talking to.”

Even if DatChat boasts of a censorship-free credo, Myman maintains that the social network they’ve built is meant to ensure a safe, private space for “living room conversations with friends and associates.”

“And one thing that’s interesting is the censorship out there — people think of it in terms of politics, but that’s almost a minuscule part of it,” he said. “For example, I just saw a story on Facebook that was fact-checked and censored. But I was kind of shocked — it was just an article in a local or regional newspaper about how people who tend to be late also tend to be more intelligent. Why can’t I read that story and decide not to believe it for myself?”

The startup, which aims to make money off in-app purchases, has raised close to $7 million in funding, and is in talks about doing an IPO in the near-future, Myman said.

In the meantime, it’s about to get underway with a big marketing push to grow its user base.

“We’re excited to make a name for ourselves,” Myman said.

Cognizant to expand Workday services with acquisition from OneSource Virtual