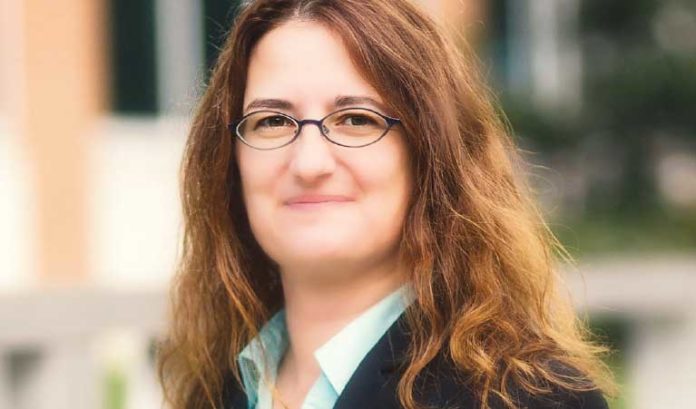 Late last year, Nelly V. Tacheva presented her ideas for a robotic process automation software company that will help knowledge workers and businesses with their automation needs. She spoke to the Jersey Shore Startups group, which is hosted by Devin Walsh, founder and CEO of Reverb Network in Asbury Park.

The startup, called Simply Flows, is based in Robbinsville and “connects clients’ cloud applications, so data … simply flows between them,” Simply Flows’ founder and CEO, Tacheva, said.

The company was recently named a finalist in Be Your Own Boss Bowl, an event that began at Temple University’s Fox School of Business in 1997, with cash prizes starting at $5,000 and a total cash and in-kind prize package valued at more than $200,000.

For those not in the know, robotic process automation, or RPA, is achieved via software that automates business processes. In her presentation, Tacheva gave the example of copying and pasting between different applications. RPA is centered around automating manual and rote-based tasks that do not require any complex decision-making.

“I, myself, would rather avoid wasting precious resources,” she told the group.

Tacheva noted that she has a lot of experience in corporate roles that involved building reporting tools, implementing process-automation projects at logistics companies, eliminating inefficiencies and reducing costs for business intelligence departments.

“The biggest satisfaction for me has always been providing people with tools that make their work easier,” she said. “And that empowers them.”

Her own experiences, she said, “have motivated me to start my own company, with the mission of automating manual repetitive tasks and streamlining processes.”

Tacheva’s startup is at the very beginning of its development, she explained, but she has a lot of statistics to show how much it’s needed.

“According to CIO Inside U.S., businesses waste $1.8 trillion annually,” she said. “Yes, $1.8 trillion on mundane tasks that could be easily automated.”

That waste, of course, translates into costs incurred by businesses, she said. Not only are there labor costs that could have been prevented, high costs are also incurred “because of the delays or missed opportunities. Delayed data could be critical for the business,” and there is also the cost associated with bad data due to human error.

Tacheva said: “Imagine if all applications a business uses were connected, all their repetitive tasks were automated, the data integrity were ensured, and the critical information were immediately delivered. … And the best part? All is done by the digital workforce!”

Tacheva acknowledges the controversy around the use of robotics and artificial intelligence.

Contacted after the event, she said: “The use of robotics and AI is often presented as ‘human versus machine’ — in other words, as a threat to human jobs. But, in fact, the best results will be achieved when ‘robots’ and AI augment people — a collaboration, rather than a competition. Automation is already happening, making parts of some jobs redundant. As proven by hugely successful companies like Amazon, the strategy is not to reduce the workforce, but to repurpose it.”

Related to RPA is digital process automation, or DPA, which is actually RPA that’s focused on automating and orchestrating processes to improve the overall customer experience.

“RPA and DPA are complementary to each other, and, when implemented together, provide a powerful platform for digital transformation,” she said.

Another buzzword in the industry is “hyperautomation.”

“(This is a) new concept, and it is the application of technologies like RPA, natural language processing, process mining and AI to augment workers and automate processes in ways that are significantly more impactful than traditional automation,” she said. “Hyperautomation is expected to be how many next-generation companies streamline business processes.”

Tacheva’s first steps when Simply Flows gets up and running will be to document and visualize the clients’ processes.

“That will give companies an opportunity to optimize them even before automating them,” she said. “When you think about it, automation by itself won’t fix a broken process, it will only make it run faster.”

The company will strive to provide the most seamless user experience possible, she said. And no coding or IT experience will be necessary for companies to maintain or scale the product.

“After thoroughly researching the market, interviewing potential users, and analyzing publicly available data, we have decided to focus on spreadsheets, email, project management and team collaboration tools, and also to have data mapping and transformations in our application,” Tacheva said. “Our core use cases will be data transfer, reporting, reminders and notifications.

“Also, we will be focusing on schedules and delays.”

For example, she said, you “need to run a workflow on a schedule, or there might be a case when it needs to be delayed or paused.”

She added: “Something else which we are thinking of is auditing approval and sign-off processes, which may require a human interaction and a manual step. This is something which is quite common in the business world nowadays.”

She concluded that the first thing she will be doing, as any good startup should, is to find the company’s product-market fit.