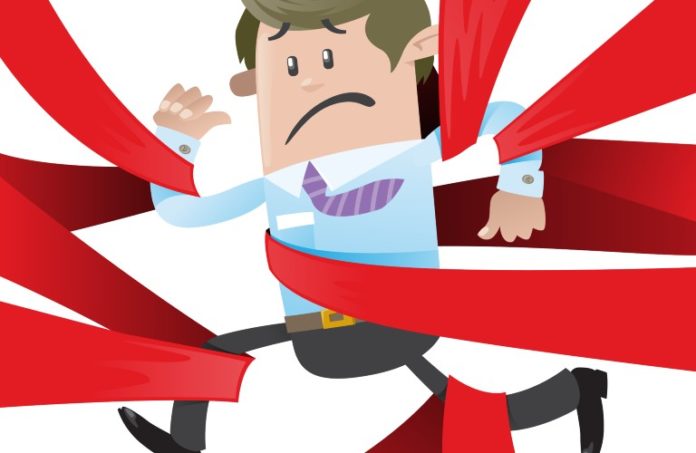 This is where we are at as a state: We’re arguing about the efficiency of our efficiency programs.

One of the many sponsors, Sen. Steve Oroho (R-Sparta) — the well-respected Republican Budget chair known to bring sensibility to government — was stunned by the veto.

“Why is Gov. Murphy opposed to making government more efficient and affordable?” he said. “By vetoing this legislation, he’s essentially saying there’s no problem with excessive bureaucracy in New Jersey or government being too expensive.

“If he took the time to speak to actual taxpayers or anyone trying to do business in the state, he’d realize he’s dead wrong.”

The legislation would have created a nine-member Government Efficiency and Regulatory Review Commission to evaluate all proposed and adopted regulations, rules and executive orders. The commission would have considered the impact of rules on the economy and determined if their benefits outweighed the burdens placed on business and government.

The members of the commission, which would have represented both the executive and legislative branches of state government, would have focused on addressing the state’s economic viability and prosperity, according to the bill.

And five of the nine members would be picked by the governor.

Murphy, in a lengthy explanation of his veto, explained his objection.

Simply put, he said, why create a permanent commission whose objective is to reduce such commissions? Besides, the duties it would have already have been parceled out.

“I applaud the sponsors for seeking to eliminate unnecessary and counterproductive rules and regulations,” he said. “To be clear, I share that goal and, since taking office, I have directed all state entities to remove bottlenecks and identify and use the best, most innovative and least burdensome tools and approaches to achieve their regulatory goals.

“I am confident that, under this administration, the officials identified to serve on the proposed commission would bring a thoughtful and balanced approach to regulatory issues. However, this legislation would establish a permanent commission, enshrined in law, that would exist not only under my administration, but also under future administrations. Under an administration ideologically opposed to regulation, this commission could easily morph into a forum that seeks to undermine longstanding common-sense regulations that are designed to protect workplace safety, the environment and public health.”

Murphy said he isn’t alone in his views.

“The organizations are rightly concerned that the commission could disrupt the regulatory process and impact the timely adoption of regulations,” he said. “These organizations also note that the commission’s mission is redundant, as agencies already review rules for their economic impact. In fact, agencies are required by law to comply with substantial information and analytical requirements in proposing and adopting administrative rules and regulations.”

Not all state groups agreed, however.

The New Jersey Business & Industry Association issued a six-paragraph response to the veto from its CEO, Michele Siekerka.

“It is disappointing as it is puzzling that Gov. Murphy vetoed a bill that provided a practical opportunity to make state government more efficient and responsive to business in New Jersey,” the statement began.

“This bipartisan legislation arrived on his desk with near-unanimous support from the Legislature. The GEARR Commission would have been coordinated by his own chief innovation officer, with five of the nine commission members coming from his administration. And the governor, himself, has said he is committed to making government work more efficiently. Yet, this common-sense bill was still denied.”

So, there you have it. A squabble about the efficiency of our efficiency programs.

If you think it’s just politics as usual, you might be right. After all, Murphy couldn’t help but reference Gov. Chris Chrisite’s administration in his response — doing so while questioning the merits of Christie’s Red Tape Review Commission.

“Simply put, there is no need to revitalize a Christie administration-era commission that my predecessor set up to illustrate his commitment to slashing regulatory protections to a national audience,” Murphy said. “While I fully acknowledge that certain members of that commission, including members of the Legislature, approached these issues in a reasonable manner, some of the commission’s efforts — particularly those dealing with environmental rules — drew criticism.

“I disbanded that commission in part because of this history of distrust, and do not want to bequeath to my successors a permanent tool that many consider inherently antiregulatory. If future governors want to follow Gov. Christie’s example and set up their own Red Tape Review Commission, they are free to do so, and the residents of New Jersey can appropriately judge their motives and priorities when they take that action.”

Harmon bowled over by continued outreach to Black business community