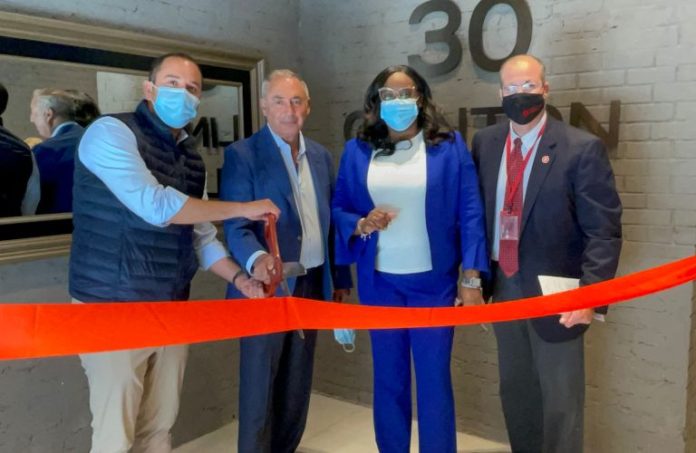 Paramount Assets held its official ribbon cutting for Clinton Flats — a 47-unit multifamily, mixed-used project in the Central Ward of Newark — last Thursday. Excitement around the adaptive reuse project has been evident long before the ceremony.

The project already is 50% leased, the company said.

Paramount officials said Clinton Flats is more than just another multifamily rental. The project, which preserves and transforms two aging, yet historically significant office buildings at 30 and 40 Clinton St. on the corner of Mulberry Street, represents the company’s greater interest in the city.

A family-owned urban real estate investment firm that aims to embrace a holistic, vertically integrated approach to real estate development, Paramount has been steadily expanding its Newark holdings since moving its headquarters to the city nearly two years ago — and seeking historically relevant locations while it does so.

Both Clinton Flats buildings are on the National Registry of Historic Places.

Senior Vice President Richard Dunn said the company is committed to the idea.

“These adaptive reuse preservation projects provide a unique living experience in the heart of Newark’s vibrant downtown,” he said. “Paramount Assets is proud to offer another exceptional opportunity to live in a building of special historic significance so beautifully preserved.

“We are especially proud of our expertise and experience in this area, and the opportunity to preserve the beauty and character of these buildings, while contributing to the revitalization of this great city.”

Here’s a look at the two properties:

“The Central Ward is booming, and the Mayor (Ras Baraka) and I are excited about it,” she said. “(This) is another move on the chessboard for us as we cut the ribbon to this amazing development, adding to the great portfolio in the city of Newark, and, of course, under Paramount Assets.”