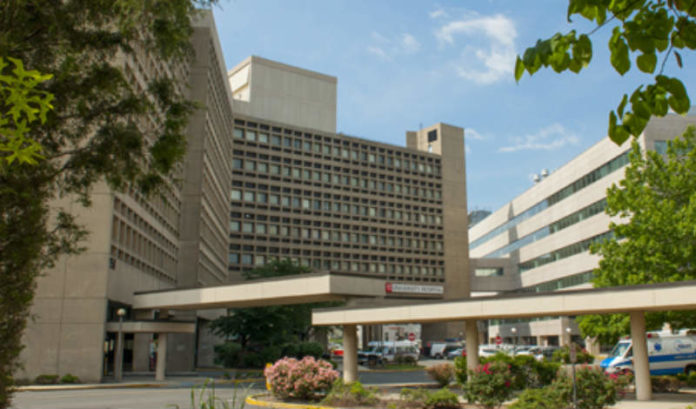 Dramatic turnarounds in a hospital’s quality of care, patient safety, community engagement and financial engagement don’t necessarily start with an overstuffed playbook of procedures, a glitzy marketing campaign or even a rousing speech from a new leader about a commitment to excellence.

They often start with a commitment to caring, to listening, to follow-through, to support. They start with a trip to the biggest, the most challenging spot in the system.

That’s what Shereef Elnahal had in mind when he visited the call center at University Hospital a few months after he took over as CEO in July 2019.

“I spent my first 10 months here, the time before the pandemic, building trust with my employees and with the community,” he said. “And the only way to build trust is to show up. So, I visited almost every working unit in this hospital myself to get a sense from the frontline about what their feelings were about leadership, but also just their suggestions on how to improve the work that they were doing.”

Time and again, both internally and externally, he heard about issues with the call center. Dropped calls, poor response times, bad answers.

“My central philosophy is that people tend to try their best,” he said. “So, I knew the problems couldn’t be as simple as I was hearing.”

He was stunned by what he found.

“I actually witnessed them Googling doctor’s office numbers within our own hospital because they did not have the tools to route people correctly on the call,” he said.

“They just didn’t have the tools they needed to do their jobs.”

Elnahal said it was one of many turning points at University Hospital.

“I learned so much from that experience,” he said. “We were able to really build trust in the process so that folks would work that much harder to make this place successful.”

Today, the call center is just one symbol of that success. Examples, however, are all around.

University is back up to a “C” grade in the latest Leapfrog safety ratings for the first time in years. It’s progress.

So is its significant improvement in quality measures across an array of common hospital-acquired conditions. For example, it has reduced:

University also has improved the efficiency of its care delivery, decreasing length-of-stay by 7.3% and surpassing the Vizient national benchmark of other complex academic medical centers throughout the country.

“We’re really proud of the progress,” Elanhal said. “The whole underlying point here is that we’re not content with where we are, nor will we ever be content, because that would not be consistent with the culture of continuous improvement that we’re trying to establish here.

“We’re proving that public hospitals can not only survive — they can thrive. Our quality performance has really just improved significantly — for some of these metrics by 80% in terms of reductions.”

Elhanal said all the credit should go to the staff.

“I can’t emphasize how much the frontline and the immediate folks who are supervising them have been so important,” he said. “We now have over 70 daily safety huddles. It’s a time where you have the entire environment of care assessed to make sure things are going well. But, it’s also an engagement tool for the employees. And I think that’s really helped.

“It’s not just saying the right things, it’s involving employees in decision-making and openly soliciting feedback on safety of the environment. And I think all of that has really helped.”

While the Leapfrog improvement is to be celebrated, it is only one measure of improvement.

Improvements in efficiency have led to far fewer people walking out of the emergency room unseen because they were waiting too long.

“When I got here, that percentage was greater than 15% on some days, which is inexcusable,” he said. “Now, we’re down to about 5%, on average, which is still not good, but much, much better.”

The hospital has been able to expand its capacity, too, Elnahal said.

“We’re opening several ICU beds, and a number of other medical surgical beds soon within our existing infrastructure, which is going to help,” he said. “And we’re really seeing growth in our centers of excellence.

“Our Liver Transplant Program was No. 1 in the country for one-year mortality outcomes. We have more and more interest in our ENT and ophthalmology services as we’ve made the environment of care better here.

In fact, Elnahal said increased efficiency has enabled the hospital to cut expenses — but not at the expense of frontline employees.

“We haven’t done a reduction in force or furloughs, but we’ve just been more judicious about staffing and supply costs,” he said. “All of that is really helping.”

The outreach to the community has been just as strong and just as significant, Elnahal said.

“That combination really helped because, by the time the pandemic rolled around, employees were primed to work harder than they’ve ever worked because they knew about the importance of this place and what we were doing with the community.”

Elnahal said this success can be measured with a different type of volume.

“We have had a wave of support during the pandemic, spiritually and emotionally,” he said. “The fact that city and county police and firefighters and all of the clergy in the city showed up to our hospital when we had the worst of the surge to honk for us, celebrate for us and thank us was a testament to the importance of building community trust and community power.”

The turnaround in support from the state is just as strong.

In 2018, Gov. Phil Murphy issued an executive order to insert a monitor at the hospital following reports of failing safety and financial metrics.

Last month, Lt. Gov. Sheila Oliver and a host of other officials actively supported an effort for the state to fund a study on how best to create a new facility.

Elnahal calls a new building a long-term goal — one that only will be realized if the hospital keeps heading in the right direction.

“Getting to a ‘B’ and eventually an ‘A’ in Leapfrog is one of those goals, but really having the more comprehensive confidence across the organization about our capabilities to provide safe and effective care, a restoration of pride and seeing this hospital as place that provides excellent care across different service lines, is the challenge.”

One Elnahal has been ready to take on since that trip to the call center.

“I’ve believed a turnaround here was possible from the day I got here because I just saw how talented this workforce was,” he said. “If you take a servant-leader mindset in a place like this, there’s really no limit to what you can accomplish.”