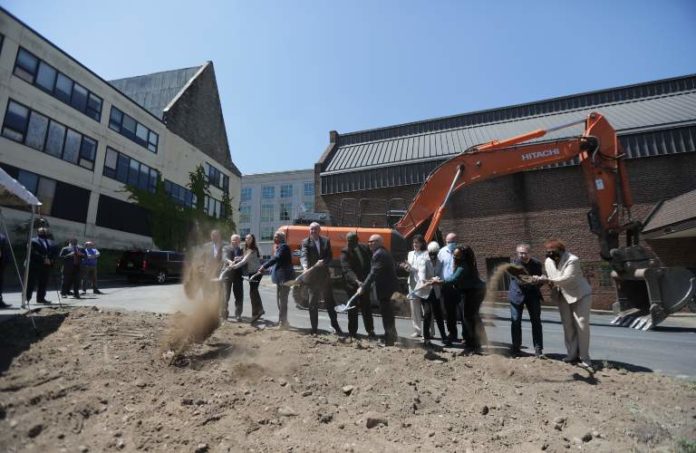 When Gov. Phil Murphy created the New Jersey State Capital Partnership by executive order in 2018 and tasked local officials to create and execute strategies to help revitalize buildings in the state’s capital city as part of its Trenton 250 plan, he had properties such as the historic Van Sciver Building in mind.

Built at 160 S. Broad St. in the early 1930s, the Van Sciver Building has had a number of uses. It began as a thriving furniture business and once served as an office building owned by the Department of the Treasury. It eventually was viewed as a surplus and sold at auction in an effort to return a state-owned asset to private hands to enable its transformation into valuable real estate once again.

On Tuesday, that vision came true.

Murphy, Mercer County Executive Brian Hughes, Trenton Mayor Reed Gusciora and a host of other officials celebrated the groundbreaking of a mixed-use development by RPM Development Group that they believe will breathe new life into the historic site.

Once this transformation is complete, the site will become a hub of activity centered around 120 residential rental units with top amenities — including an outdoor plaza, more than 7,500 square feet of retail space and underground parking.

The site, which is adjacent to the Historic Mill Hill District, the location of the original mills of Trenton, Second Battle of Trenton and the entry of George Washington into the city in 1789, also will seek to honor the history of the immediate surroundings.

The building will include 120 residential units with one-, two- and three-bedroom configurations. The project will have 60% of the units priced at unrestricted, market-rate rents, and 40% of the units will be affordable to households making 60% or less of the area median income.

The New Jersey Housing and Mortgage Finance Agency provided construction and permanent loan financing through the 9% Low Income Housing Tax Credit program. This development was also made possible through a commitment of $1.5 million from the city of Trenton in HOME Funds and through RPM Development equity.

All of this thrilled Murphy.

“This is an exciting day for the city of Trenton, Mercer County and the state of New Jersey,” he said. “The redevelopment of this historically significant site, with new housing units and retail space, marks a new chapter in Trenton’s revitalization.”

Lt. Gov. Sheila Oliver, the commissioner of the Department of Community Affairs, said the project is more than a building.

“This project goes beyond redevelopment,” she said. “It is community building.

“It preserves and honors the history of the site, while utilizing a vacant space to create new mixed-use and mixed-income housing and business opportunities.”

Gusciora said he hopes the project spurs others.

“Helping Trenton realize its untapped potential through these types of transformative projects is exactly what we envisioned with the New Jersey State Capital Partnership,” he said. “A nexus of state, city and private resources has made it possible to restore the glory of these historic vacant buildings, turning them into brand new apartments with ground-floor retail spaces that will undoubtedly be a catalyst for further investment and development in the Capital City.”

“Mercer County is only as strong as our Capital City, and the adaptive reuse of the culturally significant Van Sciver property is a prime example of how, through creative thinking, we have been able to conserve not just a building, but to preserve its heritage and improve the community surrounding it,” he said. “The Van Sciver project is another link in the chain of developments along the South Broad Street corridor, including the ongoing Mercer County Courthouse project, which celebrates Trenton’s past while making it relevant to the future.”

Susannah Henschel, vice president of development for RPM, said the group is eager to get going.

“RPM Development is thrilled to be writing a new chapter for the Van Sciver Building on Broad Street,” she said. “Working alongside the state of New Jersey, NJHMFA, the city of Trenton and local stakeholders, we are eager to start transforming these vacant buildings into a new community that will both house Trentonians and serve them through the retail spaces.”