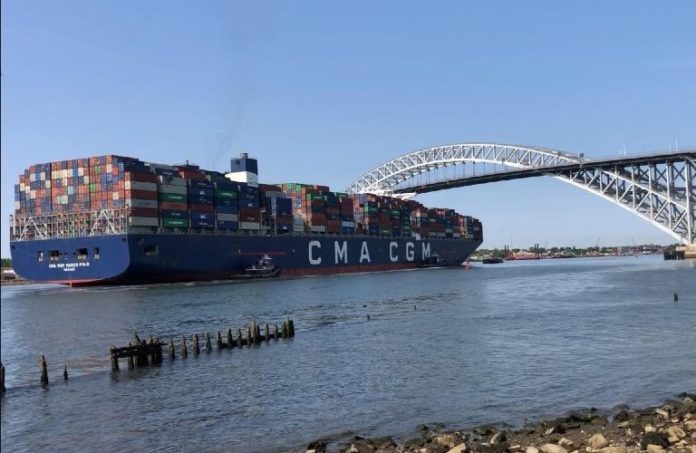 The largest container ship to ever reach a U.S. East Coast port reached the Elizabeth-Port Authority Marine Terminal. And it appeared to be even bigger than advertised.

The CMA CGM Marco Polo, carrying just over 16,000, 20-foot equivalent units — what those in the industry call TEUs but most call cargo containers — arrived Thursday morning to much fanfare.

This is, after all, why we raised the Bayonne Bridge. And deepened our navigation channels.

As a state that is marketing itself as a leader in ecommerce, being able to handle ships of this magnitude is a differentiator.

How big is the CMA CGM Marco Polo?

Consider this. Prior to 2017 — when the raising of the Bayonne Bridge increased navigational clearance from 151 feet to 215 feet — the route was limited access to cargo vessels with a maximum capacity of 9,800 TEUs.

The CMA CGM Marco Polo began its journey in Southeast Asia and travelled through the Suez Canal before crossing the Atlantic.

Rick Cotton, executive director of the Port Authority of New York and New Jersey, said the historic arrival of the CMA CGM Marco Polo highlights the Port Authority’s various investments in critical regional infrastructure and the far-reaching benefits they have on the entire region and its economy.

“The CMA CGM Marco Polo’s arrival at our seaport underscores the Port of New York and New Jersey’s ability to serve the ultra-large cargo container ships that increasingly carry the food, supplies and goods needed to sustain millions of residents, support thousands of jobs and keep businesses open,” he said.

The Port of New York and New Jersey is the CMA CGM Marco Polo’s first port of call in the U.S.

The ship will unload up to 5,000 TEUs that include clothing, pharmaceuticals, furniture, appliances, holiday decorations, building materials, home fixtures and food due for distribution to businesses throughout the region and beyond.

Ed Aldridge, president of CMA CGM America and APL North America, said the ship is glad to be able to call at ports in North America.

“We appreciate the Port Authority of New York and New Jersey’s intelligent, timely infrastructure improvements that have made it possible for us to bring in larger ships and proactively serve our customers from this key American gateway,” he said.

“CMA CGM’s agile methodology enables us to flex our operations to support the growing needs of our customers. The deployment of the CMA CGM Marco Polo is a direct reflection of that agility and our commitment to deliver the essentials that keep America moving.”