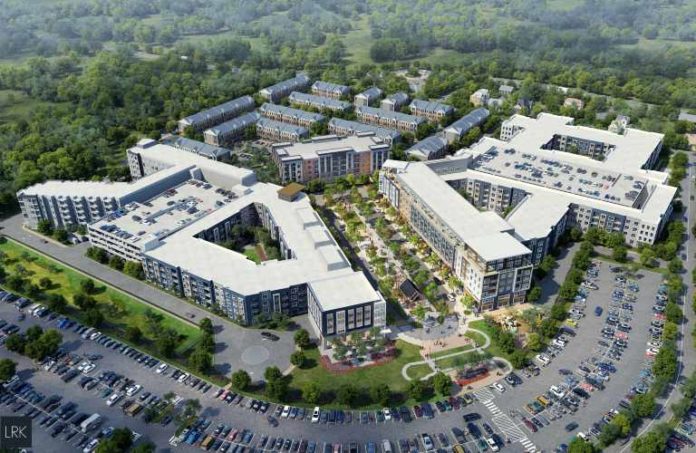 The hotel is gone. A victim of the circumstances in the hospitality industry since the COVID-19 pandemic hit. And the retail has been adjusted a bit, too — to reflect changing habits. The cost of wood? Well, no one saw that coming.

Ron Ladell, senior vice president of AvalonBay, isn’t fazed by any of this. As the head of one of the most prolific multifamily developers in the state for some time, Ladell said this is just part of the industry.

AvalonBay’s transformational project — the $300 million redevelopment of the 25 acres surrounding the Princeton Junction train station in West Windsor, a work-live mixed-use project that other municipalities dream of — is progressing nicely, he said.

“We’re still excited, we’re still optimistic, we’re still moving forward,” Ladell said. “This project is blessed with an incredible location — it’s at the train station, it’s less than a mile off of Route One. We have wonderfully talented, financially secure partners in Pulte and Atria and Welltower. And we all believe that this site is unique. It’s one that you can’t replicate it anywhere in the state.

“It’s clearly unfortunate about the timing of the pandemic, but we’re still confident.”

The project is a transformation of what is now a largely deserted and obsolete office complex into what Ladell feels will be a hub of multimodal transportation, public space, retail and a range of residential housing for all demographics, including 535 multifamily apartment homes, 135 senior housing apartments, 48 condominium flats and 150 for-sale townhomes.

There are two parking decks — as well as thousands of surrounding parking spaces. And the centerpiece of the community will be a large public promenade, which will be bordered by retail.

On a day when the project unveiled its latest rendering, Ladell spoke with ROI-NJ about its progress. Here’s a look at the conversation, edited for space and clarity.

ROI-NJ: Where does the project stand today?

Ron Ladell: The site plan has been submitted. We’re just waiting to hear when we start our hearings, but we expect that to happen in the next few months. We would like to start construction at the end of the year. And construction will take quite some time, because we have a large site, and we have to demolish quite a few buildings.

As the master developer, we’re responsible for the infrastructure construction (roads, stormwater system, promenade, parking deck). So, we’ll do that and then deliver the sites to our respective co-developers.

But, we’re excited. When you get to this stage of a particular project, you’re very eager to move forward and break ground. We’ve been working with West Windsor for nearly four years. We want to bring this project to fruition.

ROI: You mentioned the co-developers, which is somewhat new for AvalonBay. Your group is handling the multifamily units. Talk about working with Pulte Homes (which is doing the condominium flats and townhouses) and Welltower/Atria (which is doing the senior housing).

RL: It’s been fun to work with other developers. They each have their own way of doing things, but their respective projects are exciting to be involved in.

ROI: That now includes the condos, which are new to the project — replacing the hotel. Talk about how that came about?

RL: We had planned a hotel and we had signed a contract. But, when COVID came, the hotel operator/developer had to walk away from the deal because they were unable to obtain the financing.

We had to pivot very quickly, because the project was moving forward. And we were able to because it’s such a great site. Pulte expressed interest in doing an additional project — and it’s a different product, condos versus townhomes, but they believe there’ll be a different demographic.

ROI: How did losing the hotel impact retail?

RL: Having well over 150 keys a night would have been a slightly different population, which probably would have had different needs. People staying at a hotel may be more likely to shop or more likely need to pick up a few things. So, we needed to adjust the retail.

ROI: Speaking of adjusting, we have to ask: The cost of lumber, which has been skyrocketing — how much of an impact could that have?

RL: The cost of lumber is going to be a significant burden on all stick-built construction. The disruption in the supply chain, along with the incredible demand, has caused lumber to go up 400%, give or take, from pre-pandemic levels. Projects are planned years in advance, but no one planned for that.

There’s a whole host of things in the arsenal you can try to mitigate the impact. But, at the end of the day, it’s still going to be pretty significant. All of us are hoping that the supply chain, and particularly mills, get back to work quickly. At some point, the significant demand will decrease, which will help supply. But no one knows when that’s going to be.

ROI: When this project was introduced, in January 2019, you called it the biggest project you have ever undertaken. Could you have ever imagined this?

RL: I can tell you, nothing is smooth sailing in New Jersey development world. And anyone who says that is just being pollyannaish. There are always going to be challenges and issues, we know that, but we also know this is an opportunity that doesn’t happen that often in New Jersey.

Leasing activity in Livingston Town Center heats up with 3 new...