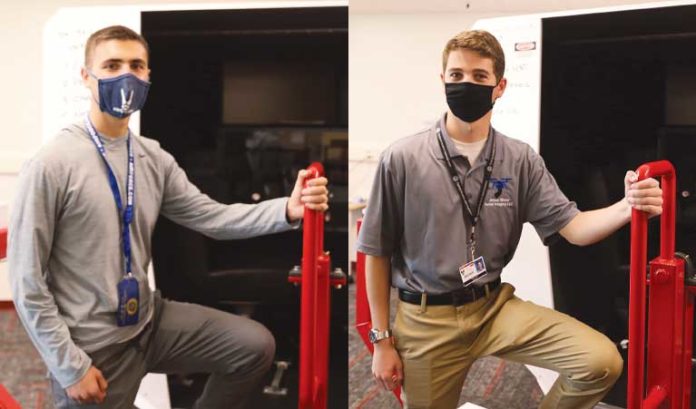 When Atlantic County identified aviation as a key industry to help diversify its economic base beyond the gaming and tourism industries, the county vocational-technical school launched a new program to prepare young people for aviation careers.

Developed in partnership with Atlantic Cape Community College and industry employers, the aviation studies program at Atlantic County Institute of Technology began in 2016 with support from a state grant to expand career and technical education programs to meet student and employer demand.

The aviation studies program offers students the opportunity to earn an associate degree from ACCC while preparing for careers in what officials hope will become a burgeoning industry in Atlantic County.

The first class of 14 graduated last year, and this year’s class of eight students is preparing to graduate from high school in a few weeks with their associate degrees already in hand.

Students who attend the program are preparing for careers in the aviation industry, including air traffic control, ground control, airport manager, aeronautical engineer, aerospace engineer and information systems specialist, as well as pilot.

“This program is a perfect fit for students who are interested in aviation,” said Philip Guenther, the superintendent of the Atlantic County Vocational School District, which operates ACIT. “There are numerous career pathways available to students in this program in an industry that will continue to grow here in New Jersey, and especially in Atlantic County.”

In addition to taking a rigorous, STEM-oriented curriculum and required high school classes, students take college-level courses at ACCC in aviation-related topics such as weather, national airspace systems, air traffic control and airport management. One course in unmanned aerial systems prepares students for the test for a Remote Pilot Certificate from the FAA.

The students get beyond the traditional classroom, taking some of their classes at the National Aviation Research and Technology Park at the FAA William J. Hughes Technical Center, a facility at Atlantic City International Airport that tests, evaluates, verifies and validates the FAA’s aviation systems.

At the technical center, students have a full flight simulator in the classroom, where they can learn how to pilot various types of aircraft.

The location allows students to participate in a mentoring program in which they rotate monthly through various labs at the research facility.

“The program provides students an opportunity to explore various aviation-related career paths and gain a sound understanding of jobs for the future,” said Clifford Kaelin, a systems engineer at the FAA.

Ryan Rybka’s lifelong enthusiasm for aviation started when he went to airshows as a kid, and he dreamed of becoming a pilot. ACIT’s aviation studies program was the perfect fit for the busy and accomplished Egg Harbor teenager, allowing him to succeed academically while pursuing his interest and developing useful career skills.

“My hometown high school is good, but I felt ACIT was tailored for my needs,” he said. “I wasn’t going to get aviation at a regular public high school. At ACIT, we’re constantly studying topics that I have a passion for and find interesting.”

Now that he’s nearing graduation from ACIT, Rybka has begun to focus on a career in airport management after taking a class in the topic. He’s planning to study finance at Rutgers University in the fall.

“When I was a freshman, I wanted to go the pilot route, but, after having a chance to see all the different opportunities and different jobs in the industry, I have shifted my focus to airport management, which is where I think I’m going to find myself,” Rybka said.

“I like the business side of things,” he said. “We’re looking at airports. How they’re being built, how they raise money, how they operate. The class has allowed us to get a chance work in that industry for a little bit and learn about it.”

Rybka realized his interest in business after starting his own just two years ago. After he received his Remote Pilot Certificate from the FAA, he began to do aerial photography with a drone for clients in real estate’s engineering construction industry.

“I saved up to buy the drone, create the website and all the marketing materials,” he said. “I was able to actually apply what we studied in school in the industry.”

Senior Rocco Mancuso’s interest in aviation began as a child as well.

“I always had a flight simulator on my computer,” said Mancuso, of Brigantine, who also is earning an associate degree. “I was always interested in the physics of how planes work, and how they fly. I watched plane disasters and wanted to know what happened when a plane crashed and how the National Transportation Safety Board investigated crashes.”

Mancuso said the FAA mentorship program has been eye-opening because it has expanded his breadth of knowledge about aviation.

Mancuso, who participates in ACIT’s Air Force Junior ROTC, is planning on going into the U.S. Air Force and eventually becoming a pilot. He’s grateful that his four years of high school were spent in the program.

“I’m extremely blessed and fortunate and thankful that I got to do this,” he said. “It was such a great opportunity for me.”

And, Atlantic County officials hope, a good opportunity for the county as well.

Career Classroom: SkillsUSA contests are a win for employers in need of talent