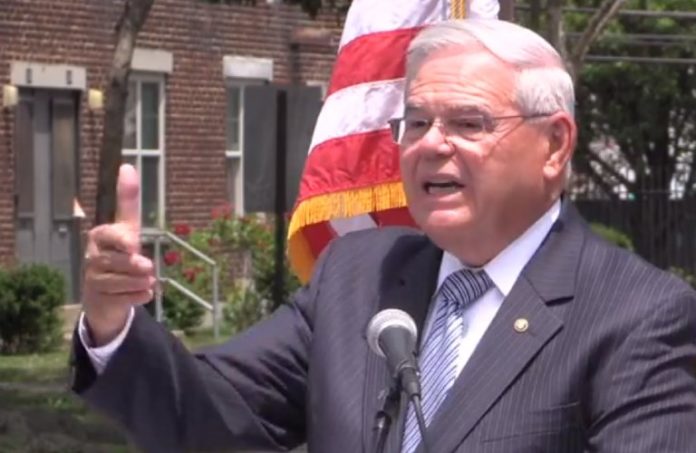 There will be money to upgrade public housing — including the building of 350 energy-efficient units — money to improve infrastructure and recreational areas, money to expand access to job and economic opportunities for residents, and more.

The hope is that the $35 million Choice Neighborhoods Implementation grant the city of Camden received from the federal government will be a starting point for revitalizing the Cramer Hill neighborhood in East Camden.

“This $35 million award we’re announcing today will help Camden realize its plan to replace distressed housing in the Cramer Hill neighborhood and ultimately improve the quality of life for the residents of Ablett Village,” Menendez said.

“The city and Housing Authority (of the City of Camden) have put forward a visionary plan that includes building 350 new, energy-efficient units, including 21 additional low-income apartments; improving pedestrian infrastructure and access to mass transit; providing recreational opportunities, including a new community center, playgrounds for children and walking trails; and even creating a garden for locally-sourced produce.

“These are exactly the kind of investments that will attract more businesses to the area and connect the residents of Cramer Hill to greater job opportunities.”

The neighborhood plan incorporates redevelopment, rehabilitation and infill housing strategies as the basis for overall neighborhood transformation, with a focus on creating new connections along key corridors that link residential areas with schools, open space, transit and retail amenities.

At the heart of the revitalization is the redevelopment of Ablett Village, the last of the city’s original public housing complexes. With the grant, the city Housing Authority will create 350 energy-efficient, mixed-income housing units to replace the current 306 units.

The plan also includes a community garden with locally sourced produce, a walking trail, community center, playgrounds, and expanded transit and pedestrian infrastructure. In 2018, the lawmakers announced a $350,000 Choice Neighborhoods Planning Grant for this project.

Lt. Gov. Sheila Oliver, who serves as commissioner of the New Jersey Department of Community Affairs, said the plan could have huge impact.

“DCA has long valued how a thriving Cramer Hill community uplifts the city of Camden as a whole, and we appreciate HUD’s contribution to the neighborhood’s revitalization efforts,” she said. “With all levels of government and stakeholders moving in the same direction, the future of Cramer Hill is extremely bright.”

For Camden County Commissioner Al Dyer, who was raised in the area, the announcement that took place outside the Ablett Village community center was personal.

“Growing up in Ablett was challenging,” he said. “The environment was tough, and across the street from the complex was a landfill that was a stain on our neighborhood. Now, with the $35 million investment by HUD to improve and enhance the housing and the state’s investment to turn the landfill into a waterfront park, the impact on the community will be immeasurable.”

Víctor D. Figueroa, executive director of the Housing Authority, said the grant will help the city implement a long-held vision.

“It’s moments like this that remind us what is possible when we come together as a team,” he said. “For years, HACC, the Cramer Hill community, and our many partners have been working around a shared vision for a more equitable future in Ablett Village, one that especially benefits its low- to moderate-income residents.

“And, now, with HUD’s generous support, including the Jobs Plus Program, which has been in place at Ablett for three years come this August, we are excited to put our carefully developed plan into action.”

Norcross said the announcement was welcome news for an area that has been hit hard by the pandemic.

“Today’s announcement highlights our collective commitment to ensuring residents of Camden not only have affordable, safe places to call home, but have access to jobs, quality education and economic opportunities,” he said. “Urban communities like Camden city have been disproportionately impacted by the pandemic, and these vital funds will go a long way to ensure that Ablett Village can provide the services that residents need and transform this neighborhood for generations to come.”