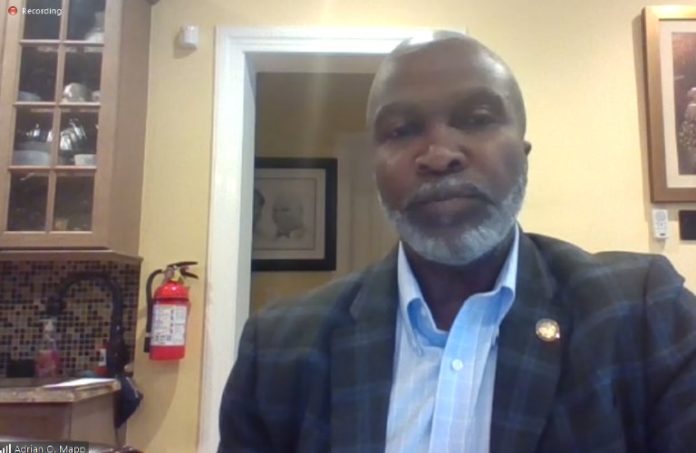 There will be a bigger grant program for the town’s small businesses. Plainfield Mayor Adrian Mapp figures approximately 100 businesses will get grants of up to $10,000 — a total of approximately $1 million.

And every business will get a grant because of all of them have been impacted in some way, Mapp said.

“Small businesses are the foundation of what happens in Plainfield,” he said. “And, although we mentioned a million dollars, that amount is not cast in stone. If we need to do more, we would be able to do that.”

It’s all part of Plainfield’s plan for a post-pandemic world. One that is putting a strong emphasis on small business and economic development.

One that is benefiting from a larger-than-expected aid check from the federal government.

The ability to do such grants comes as a result of an aggressive advocacy program from Mapp, his administration and the Plainfield city council — one that Mapp said resulted in the city getting $24 million in pandemic-relief funds from the federal government, far more than the $9 million the city originally figured it would get.

The key, Mapp said, is using that money in a way that helps add to Plainfield’s reputation as a city on the rise — one that preaches assistance for its most needy residents but understands a commitment to the business community will help all.

On Thursday morning, Mapp announced some of the aspects of what he is calling the Plainfield Recover: Jobs and Financial Assistance Program.

“The Plainfield Recover: Jobs and Financial Assistance Program will not only ensure our city’s recovery, but it is a down payment on our future,” he said.

Mapp proudly stresses that the plan will help the city’s most vulnerable people (seniors, youth) and institutions (arts and culture), but it is built around the idea of economic development.

And this is where it gets tricky. Mapp knows he needs to meet the needs of those in his city, while providing an incentive for more people and businesses to join them.

“There has always got to be a balance,” he said.

It starts, he said, with tax cuts — something Plainfield has been able to do the past two years.

“If you put money in the hands of residents, they’re going to spend those dollars supporting the businesses that are here,” he said. “But we’re also focused, in terms of economic development, on attracting new business into our city.”

That starts with more housing options, as well as enhancing the shopping experience of the people that live here and those that he is hoping to bring into the city.

There are plans for a pedestrian mall and a number of mixed-used projects already are under construction, one of which will include a banquet hall — something Mapp said the city desperately needs.

“Right now, you have to go outside of Plainfield if you’re having a big wedding or a major social event,” he said.

A top-level restaurant from Frank and Jeanne Cretella of Landmark Hospitality, which was slowed by the pandemic, is coming. Mapp feels a top grocery store chain well be announced soon, too. Both figure to help outsiders learn what those in Plainfield already know.

“The quality of life that exists here in Plainfield is of a very high standard,” Mapp said. “The city is extremely safe and inviting. We have been attracting residents from Westfield and Cranford and from New York City in particular because of what we have here in the city — it’s the experience that people are looking for.”

It’s an experience that Mapp knows he needs to grow.

“We are looking at this in a multipronged way,” he said. “We know we have to add amenities to attract and retain the residents that we have here. We know how important that is. And we’re focused on that in terms of marketing to those on the outside.”

All of this comes on the heels of the pandemic.

Mapp understands his city — like so many others — was hit hard by COVID-19.

“The public health crisis devastated so many lives globally, nationally and in our state,” he said. “Plainfield was no different. Many of our residents lost loved ones, lost jobs, fell ill and had their lives disrupted.”

But, from it, comes an opportunity.

“In unprecedented times, we are afforded the opportunity to reimagine our community in ways that transform lives and build a lasting legacy,” he said. “And that’s what we are doing.

“We’re building a stronger, more vibrant and more equitable city for our residents and future generations.”