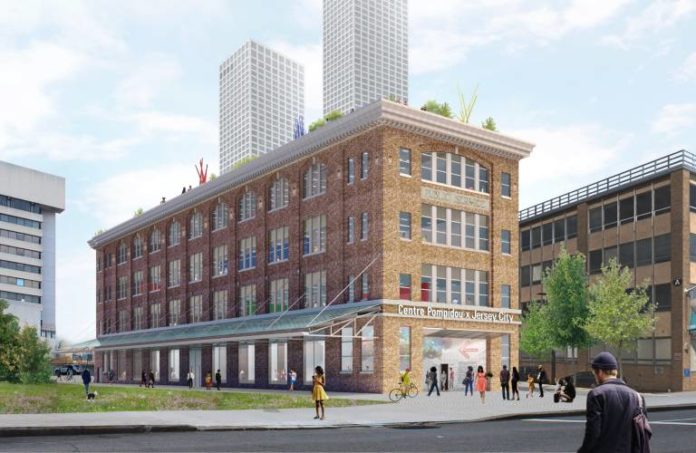 In an announcement that is great for the arts in the region and the country — and one that speaks volumes regarding the rise in stature of Jersey City — officials from the Pompidou Center in Paris said the world-famous museum intends to open a satellite location at the iconic and soon-to-be-renovated Pathside Building in Journal Square.

The Centre Pompidou × Jersey City, which will be Pompidou’s first satellite in North America, will give visitors a sampling of the Pompidou’s more than 120,000 pieces of art through exclusive exhibitions, while serving as a cultural hub of learning.

The four-story, 58,000-square-foot Pathside Building was built in 1912. Located at 25 Journal Square, near the PATH station, it was purchased by Jersey City in 2017 with the intention to create a new arts and cultural hub for Journal Square and the city. Pending the expected approval by the city council, it will be renovated by OMA, a New York City-based architecture firm. It is expected to open in the early part of 2024.

Jersey City Mayor Steve Fulop, who frequently has said the arts are a key component to economic development, was thrilled by the significance of the announcement.

“As the largest modern and contemporary art collection in Europe, the Centre Pompidou is the perfect partner to carry out our vision and solidify Journal Square as a regional anchor for the arts,” he said. “When the Pathside building was slated for high-rise development, we saw a unique opportunity to change its trajectory to better serve the city as a museum and community center. Today, that commitment is not only coming to fruition, but we’ve raised the bar with a tremendous international partnership that will bring world-class opportunities to Jersey City.

“This is the latest major step towards our broader revitalization goals, utilizing all our city has to offer and establishing Journal Square as a cultural destination for generations to come.”

Here is more on the announcement:

Located in the Beaubourg area of Paris, it was commissioned by former French President Georges Pompidou. It houses a huge public library as well as the largest museum for modern art in Europe and serves as center for music and acoustic research. It opened in 1977 and has become one of the world’s top cultural attractions.

The goal in Jersey City

Officials say the cultural cooperation between France and the U.S. will launch a strong partnership aiming to reinvent, develop and activate Journal Square’s iconic Pathside Building. The Centre Pompidou × Jersey City will become an all-new leading international cultural hub that serves as a dynamic destination for residents and visitors from all over the region, reflecting the energy and diversity of Jersey City’s burgeoning arts community.

The Centre Pompidou will provide its expertise to create an ambitious program emphasizing education via hands-on artistic and cultural experiences, with a community component central to Jersey City’s ambitious and inclusive vision for the future, making the Centre Pompidou × Jersey City a promising multidisciplinary art laboratory for cultural and educational programming.

The Pathside Building was originally constructed in 1912 to serve as an office building for Public Service Enterprise Group. In 1995, the building underwent a major renovation to create new classrooms and a library for Hudson Community College and served as part of the college’s urban campus until 2017, when it was acquired by the city of Jersey City.

The existing building retains many original historic elements, including original brick masonry with terra cotta/cast stone copings, parapet, cornicen, trim and a limestone/cast stone ground level band and main entrance. Historic elements will be preserved and restored to highlight the building’s storied past.

The building’s structure allows for generous, flexible open spaces for use as galleries and spaces for a variety of other cultural uses. Generous floor-to-ceiling heights and ample access to daylight offer a number of opportunities for the future fit-out of the existing building.

The western façade of the building faces onto a wide concrete pedestrian walkway that directly connects the PATH transit system with Sip Ave and Journal Square.