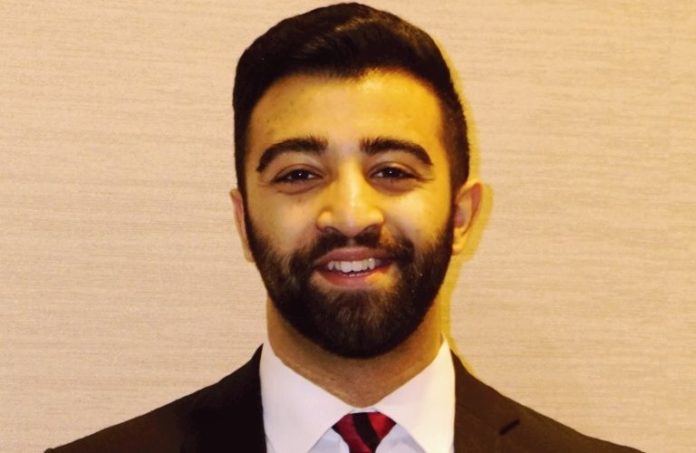 Some entrepreneurs begin a startup’s founding story with a tale of personal adversity, but the misfortune that inspired Samir Peshori’s startup wasn’t his own. In fact, he was quite comfortably enjoying a plate of food in a Mexican restaurant when the concept came to him.

It was there he witnessed the exact content of a restaurant wait staffer’s nightmares, which by comparison would make a cold-sweat, dark-night flight from an ax murderer a restful dream:

It was a split check. Eleven ways.

“Just watching that whole process, the technicality of it, while we had to wait for service at our table, there seemed to be such a need to implement today’s technology to help out,” he said.

The recent New Jersey Institute of Technology computer science graduate went on to co-found a digital platform for streamlining ordering, paying and interacting with restaurants. In the venture, called GlydeApp, he was joined by a friend whose family owned food businesses.

They assembled a team and developed a solution at VentureLink@NJIT, the state’s largest startup hub and coworking space. They also took advantage of the complimentary mentoring programs available for NJIT students.

Now that they’re rolling out the enterprise, they’ve gotten some traction in the form of an investment from Village Global, an early-stage venture firm founded by prolific entrepreneurs such as Mark Zuckerberg, Bill Gates and Jeff Bezos.

What GlydeApp is doing — offering diners a way of scanning a QR code on their phones and accessing a digital menu that later in the meal acts as a digital check — sounds like a COVID-19 inspired solution.

But the concept — and the chips and salsa observations of Peshori, who is the company’s chief operating officer — predated the spread of the virus.

“COVID-19 was never actually the driving point behind this,” he said. “But the onset certainly accelerated the need for touchless ordering processes. Throughout the pandemic, what we noticed was a lot of tech being developed for restaurant pickup and delivery, but nothing for dining in.”

There are restaurants that have made a transition to QR-code menus, Peshori said. And not all of them are using GlydeApp for that.

But Peshori believes in the local startup’s potential to beat others to the punch with a comprehensive digital dining solution.

“At the end of the day, we’ve been deploying this, and we’re already working on rolling out features that are more helpful for restaurants,” he said. “A lot of these other systems that have come out do some things, but not all things. We’re just trying to encompass it all.”

The platform, which is currently making its money by charging restaurant customers a 5% service fee, allows dining establishments to develop a customized menu that aesthetically matches the theme of the restaurant.

Restaurant owners also get a diner’s email address out of the deal as an additional customer touchpoint, as well as data from their food and beverage orders.

“So, they can also use it to better understand what’s selling — what’s moving and what’s not,” Peshori said. “And, overall, that just helps with their margins.”

GlydeApp is being rolled out to New Jersey establishments after fixing some complaints of early clients, such as the fact that the platform was once only accessible on Android devices. Another issue that the local startup is addressing for restaurants is the lack of integration with the point of sale systems they already have in place.

“For a lot of restaurants, another device or tablet was the last thing they wanted to deal with,” he said. “They already have so much to deal with on a day to day (basis), and with third-party companies like GrubHub bringing in tech for them to use, they just didn’t want more of it.”

The goal now is to make a successful pitch to more New Jersey restaurants and eventually get establishments across the tri-state region to embrace the platform.

“We have much more of a server-centric restaurant culture in the U.S., as opposed to the Asian market, where they’ve already made a full transition to scanning QR codes to order and pay,” he said. “In the future here, we feel like there’s still going to be a strong role for servers and, especially, as more of the hosts of a restaurant.”