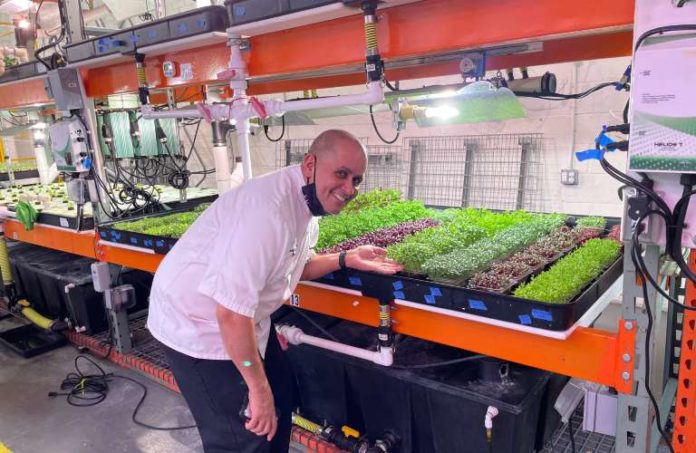 Growing up means growing vertically to one organization serving individuals with autism in New Jersey.

Taking an approach to the farming business that’s novel, and pairing it with a first-of-its-kind social initiative, Greens Do Good is giving adults on the autism spectrum a chance to work on an indoor hydroponic vertical farm in Hackensack.

Those running the program, which was partly funded through a New Jersey Department of Health grant, say it’s training individuals for the future of work in agriculture and churning out some of the greenest thumbs in the Garden State. The businesses they’re partnering with agree.

It’s the latest project to come out of the REED Next initiative, an offshoot of REED Academy, a private, nonprofit school for students with autism in Oakland. REED Foundation for Autism, the charitable arm of the organization, is the official group behind Greens Do Good. Lisa Goldstein is the vice president of development.

“What REED Next really addresses is right in the name: What’s next after an individual with autism turns 21,” Goldstein said. “These individuals often go home and have nothing to do at that point. Once they become adults, the state basically says, ‘We’ve covered you and you’re not our responsibility anymore.'”

Goldstein explained that there’s a serious lack of employment opportunities for individuals with autism in New Jersey and across the country; nearly half of all individuals age 25 with autism have never held a paying job.

In an effort to find those employment opportunities for REED Academy’s students once they’re done with school, the organization, through its affiliates, started looking into training graduates for increasingly in-demand traditional farming roles.

“And then we came into contact with Dickson Despommier, a professor at Columbia University who is really the grandfather of vertical farming,” Goldstein said. “In talking to him about this farming idea, he said: ‘Wait. Stop right there, you need to do this as a vertical farm. It’s indoor, has a small footprint and leads to less waste.’ With the type of organization we are, we were willing to try something new if it made sense.”

Indoor vertical agriculture is starting to become big business in the Garden State — with New Jersey hosting the world’s largest example of it at AeroFarms in Newark.

Greens Do Good takes the extra step of doing it with a hydroponic, environmentally friendly, energy-efficient method of growing produce. The program’s 3,300-square-foot facility grows basil, kale, lettuce and microgreens.

“We have great produce — but that’s relatively easy,” Goldstein said. “And our product sells itself. But, more than that, we’ve got our mission. Helping adults with autism is really the heart of who we are.”

The sustainable and socially responsible operation is growing by leaps and bounds, she added. Its produce makes it into everything from local food banks to ShopRite stores.

Edgewood Country Club in River Vale, and its executive chef in particular, Tony Villanueva, was the first to purchase from the farm. He’s sharing the wealth by recommending the program’s produce to chefs from other area country clubs, who now do business with the farm, as well.

“I can tell you as a chef that no market or vendor for microgreens has the quality of produce that they have,” he said. “Their quality is far superior to anything I can purchase. And we’ll pay for the quality and the local, sustainable sourcing.”

Villanueva, who mentioned that his daughter teaches at another school that serves students with autism, became friends with Goldstein while he was working for a different country club — about 20 years ago.

“I’ll never forget when I first met Lisa. Here was this little woman with such a strong presence and a powerful voice,” he said. “How could you not feel the human aspect of what she was saying. So, I opened my mind and heart to the message she was putting out.”

The chef calls it a “labor of love.” He’s a longtime supporter of Goldstein’s nonprofit, often donating to silent auctions and preparing menus for its events.

He believes what it’s doing now with Greens Do Good is revolutionary, and expects the trend of sustainable and socially responsible ingredient sourcing at food businesses in New Jersey and elsewhere will take this concept far.

Goldstein said the program’s facility is already getting close to capacity, and it’s exploring the use of additional space for farming.

By cultivating the vocational skills of more and more adults with autism, the program’s leaders hope to transition a newly skilled workforce into jobs at other farms.

“We really want to provide a new generation of green-collar jobs,” Goldstein said.