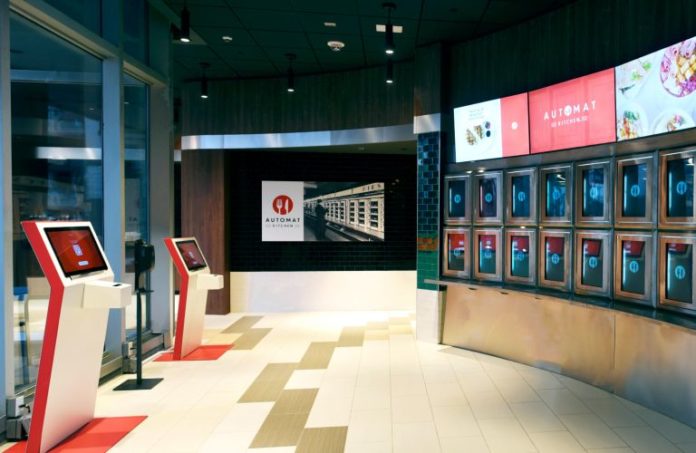 Nothing about a food concept born of baby boomer reminiscence screams … TikTok influencers.

And, yet, a local business reviving a restaurant model once popular in the region — the automat, a vending machine-style eatery with a pre-World War I origin story — had its best weekend ever recently, due to a TikTok influencer’s millennial and Gen-Z following.

Novelty and nostalgia both work in favor of Automat Kitchen in Jersey City. And its owners hope the combination of fond memories and next-big-thing social media traction overcome growing pains. Because, novel or not, any food business is going to have them when starting up during a global pandemic.

Joe Scutellaro is an unlikely principal owner of the startup that’s resurrecting the automat business model — unlikely, because he’s a tax accountant by trade.

“But, throughout my career, I’ve always worked in and around hospitality and food service businesses,” he said. “Being an accountant, I know that front-of-house costs are a major part of the restaurant business. If you could save some there, from the accounting standpoint, you’d have a much more profitable endeavor.”

That’s the promise of the automat. It’s a food concept eschewing wait staff, instead allowing customers to order simple food such as soups or pies directly from a vending machine. But, after going strong in New York City from the ’20s to the early ’90s, the concept became a retro-futurist relic of the past.

Hoboken native Scutellaro recalls making holiday outings to these automats at a young age. Later in life, he worked in New York City, two blocks away from the last automat location to close, in 1991. The accountant was sharing these memories with a hospitality client one day more than a decade ago. And it was that conversation that led to him pairing up with other professionals to relaunch the business model locally.

“But the technology 15 years ago wasn’t fully there,” he said. “I got a group together and we developed the plan, the concept and the project. We realized that, although it was doable, it wasn’t cost-effective.”

With one of the original partners being a patent attorney, they decided to patent the automat concept while waiting for the technology to catch up to the idea. Scutellaro said the impetus for getting the band back together was a restaurant in San Francisco launching a similar concept, proving the cost-effectiveness of it.

Jersey City’s own iteration of the vending machine food concept opened in January. It was slated for an earlier opening, in April 2020 and then fall 2019 before that. But the entrepreneurs faced some technology and manufacturing design issues and then the obvious: an entire-state lockdown as COVID-19 ran through the Garden State.

The pandemic break gave them time to retool how the system worked. People show up at Automat Kitchen, scan a QR code, order their food, receive a text when the food is ready and then send back a message when they’re ready to grab the food from their designated box. It’s more of a touch-less experience than the company had before, which once involved inputting a code to receive a meal.

The business owners also had to change their marketing approach, and start bringing their food to customers through DoorDash and GrubHub.

“When we first started, we thought delivery was the complete antithesis to our concept,” Scutellaro said. “It’s an experience-based concept, so we really wanted customers to be there. Due to the pandemic, we had to acquiesce and sign on to the delivery services, because there’s a huge risk in not doing so.”

The risk of not using these platforms right now is that the foot traffic isn’t enough to drive business, even as pandemic worries start to fade into the background. The Automat Kitchen is based out of Newport Tower, an office building at 525 Washington Blvd.

“We thought there would be a huge breakfast and lunch crowd from the office occupancy in Jersey City,” he said. “But our building alone, which had 4,000 people in it each day before COVID, is still at less than 500.”

Scutellaro still views the Jersey City location as a good one for the long run. Restaurants in downtown urban locations are just not what they used to be for the time being, he said, which is why the second and third locations they’d like to move into are suburban shopping and entertainment complexes and airports.

But they’re not the only restaurateurs trying to update the automat business model. It’s a challenge not just in terms of more competition, but perhaps in a more serious way; Scutellaro feels these businesses are infringing on patents they were issued more than a decade ago.

“But we’re not worried about that right now,” he said. “Right now, we’re focusing on building our own brand. And we’ll be expanding our proprietary system in the future.”